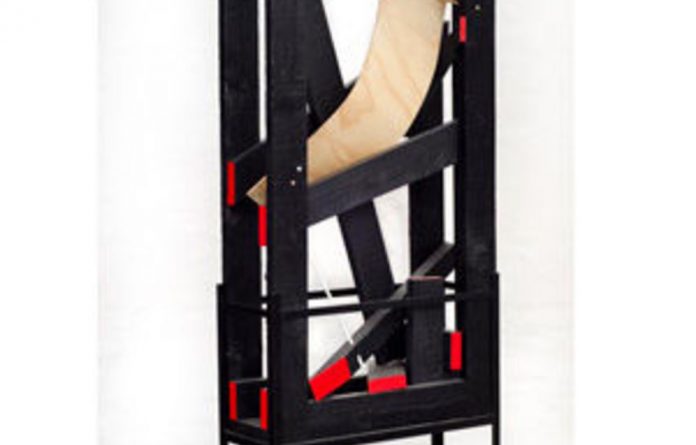 Chatting to Burundi-born artist Serge-Alain Nitegeka a few days before the opening of his first solo exhibition, Black Lines, at Braamfontein’s ­Stevenson gallery, he had the proverbial sullen look of a blacksmith visited while busy at his smithy, yet he was generous enough to agree to a quick interview.

Like a factory worker, he was wearing gloves as he hung huge paintings on the walls. On the gallery floor, long black roof trusses were strewn, waiting to be assembled into an installation. Elsewhere in the gallery his sculptures were already in situ.

The core of this show is a culmination of his themed work, titled ­Fragile Cargo, whose genesis ocurred several years ago. The polygonal sculptures are made of dark wooden crates into which pieces of wood are arranged in various shapes. This wood has been at the receiving end of all manner of “rough” tensile treatment, including steaming, heating and bending.

This work, a press statement points out, “investigates the concept of liminality in the frame of forced migration” and is a “study [of] the in-between state and space in which some marginal individuals such as asylum seekers and refugees find themselves”.

On the move
Nitegeka was born in Burundi and was forced away from his homeland when civil war broke out in the 1990s. After brief sojourns in several African countries, including the Democratic Republic of Congo and Kenya, he finally settled in South Africa about nine years ago. He is about to finish his master’s degree at the University of the Witwatersrand where, in 2008, he won the Robert Hodgins prize and, in 2010, the Tollman award for visual art. Last year, he was selected for the Dakar Biennale.

“This [work] is a metaphoric interpretation of the bundle,” he said, as we stand by one of his sculptures. This sculpture, he said, pointing to the work in which steamed wood had been rolled into a spherical shape while confined in a crate, was meant to conjure the image of hastily packed cargo, thrown into sheets and kept in place with belts.

At the centre of the work, he said, were questions such as how one carries what is dearest to one across borders and how one best wraps it in a protective shroud, hence the title Fragile Cargo.

The cargo could be memories of one’s homeland, one’s family, or photographs or “whatever it is one carries close to one’s heart”.

The overwhelming use of wood in Nitegeka’s work, one might opine, is suggestive of the centrality of wood in the transportation industry and the relative ease with which one can shape it. In a way, it points to the practical changes migrants have to contend with when they move to a new country.

Frozen in space and time
As has been written about elsewhere, immigrants speak an archaic dialect of their language that is located at a fixed point in time, and yet they are never able to speak the tongue of their new home like the so-called true inhabitants of the land.

Nitegeka’s angular and anti-poetic paintings, with their oppressive monochromatic textures (hence the title Black Lines), are rendered from his installations. “I paint all my installations to make them last,” he said. The installation he was about to assemble had its genesis in his work last year at the National Arts Festival in Grahamstown, titled Tunnels.

The installation of planks and trusses jutting out and forming labyrinthine triangular shapes is a sculptural meditation on the life of the migrant.

The crisscrossing dead wood, which makes movement difficult, in which the eye’s gaze is chopped short and the dark textures add to the gloom, could be interpreted as a sharp geometry of the exile. It alludes to the maze the immigrant-refugee has to deal with: corrupt police, payola-palmed public servants and an indifferent ­bureaucracy.

The work cannot be accessed through the voyeuristic gaze. It makes particular demands of the viewer, insisting on a person’s willingness and ability to manoeuvre around the trusses to view the paintings and sculptures. In this way, spectators “assume the role of performers in a choreographed ritual of bodily displacement”.

Former Constitutional Court justice Albie Sachs is bound to art and politics by love and lineage. He chats about this and his years of art collecting.
Read more
Advertising
Continue to the category
Politics