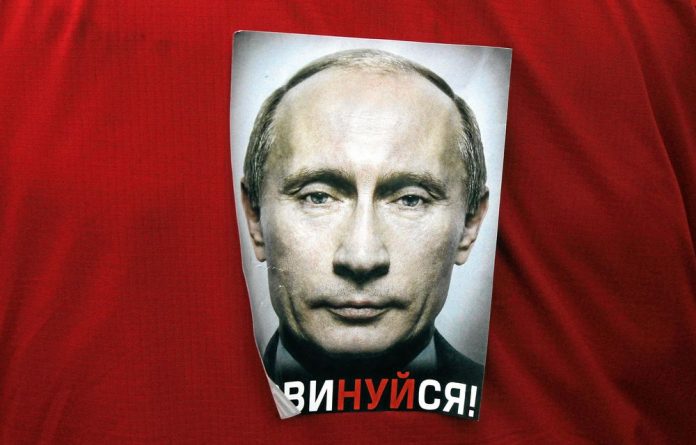 The Kremlin was accused on Monday of playing up a purported assassination attempt against Vladimir Putin to boost his popularity ahead of Russia’s upcoming presidential election.

“This is part of a clear election campaign,” said Yevgeniya Chirikova, a leader of the protest movement that has brought tens of thousands of people on to the streets of Moscow calling on Putin to quit.

“It is to bring attention to Vladimir Putin and to develop this idea that there is a threat everywhere. It is a spectacle.”

State-run Channel One television reported that two men arrested by Russian and Ukrainian special forces in the Ukrainian port of Odessa had been dispatched to kill Putin by Chechen rebel Doku Umarov, the leader of Russia’s separatist Islamist movement. One of the men, identified as Ilya Pyanzin, was detained after an explosion in the apartment he was renting with another man, who was reportedly killed in the blast. The channel broadcast footage in which Pyanzin repeated instructions he claimed he had been given. He said: “In Moscow, you will sabotage economic sites. Further, an attempt on Putin.”

Channel One also broadcast footage of the detention of a third man, identified as Adam Osmayev, a Chechen who was said to be living in London. The report said he had studied economics at Buckingham College in London and turned to terrorism after meeting Chechen rebel exiles in the capital.

Osmayev, his face crusted with blood and a green ointment popular in the former Soviet Union for the treatment of wounds, told an interviewer: “The final goal was to go to Moscow and carry out an assassination attempt on Prime Minister Putin. The man who died was ready to become a suicide bomber.” He said they had hoped to avoid that option, planning instead to plant mines along a road often used by Putin.

News reports in liberal Russian online media suggested Osmayev was on a list of “political prisoners” compiled by the opposition. The release of such prisoners is one of the protesters’ demands.

Channel One said it received information about the assassination attempt 10 days ago, but did not explain why it did not release the news sooner. The report, aired just a week ahead of an election that is expected to sweep Putin back into the Kremlin despite growing protest against his rule, was treated with suspicion in liberal circles.

“Do I understand that no one believes in the assassination attempt on Putin?” Danila Lindele, a leader of the opposition Blue Bucket movement, wrote on Twitter. Another Russian user wrote: “It is better to pretend we believe it. Or else they will start blowing up homes again.”

Putin’s critics allege that a series of apartment-block bombings on the eve of his first election in 2000 were orchestrated by the Kremlin to boost the then unknown politician’s popularity, rather than by Chechen rebels, as claimed. A similar assassination attempt on Putin was allegedly foiled on the day of Russia’s last presidential election in March 2008.

Putin’s press secretary denied the release of the report was linked to the upcoming vote. “Given the seriousness of the imminent attack on Vladimir Putin and given that a serious risk was confirmed during the preliminary investigation, making such statements is, at minimum, blasphemous,” Dmitry Peskov told online news portal Gazeta.ru.
–