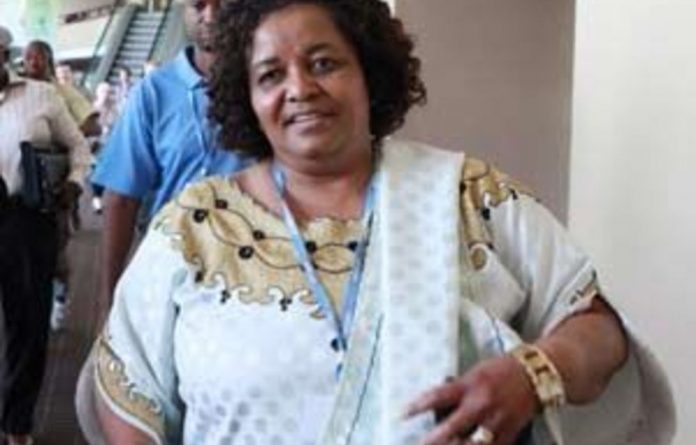 Water and Environmental Affairs Minister Edna Molewa launched National Water Week on Monday by cutting off the illegal water use of two farmers in the Free State.

Speaking next to the Vaal Dam wall, she said as many as 229-million kilolitres of water were being taken illegally from the river and its dam each year.

To put this into perspective, an Olympic-sized swimming pool holds 2 500kl of water.

While most farmers were compliant, she said, some either took water they had not been allocated, or took more than their allotted share.

With water from the dam’s outflow thundering in the background, Molewa said people had to realise how valuable water is in South Africa. “We want to remind everyone that we live in a water-scarce country with periods of drought in some parts and flooding in others,” she said.

Blue Scorpions
In a long convoy, and with media-laden helicopters buzzing ahead, she went with the department’s enforcement unit — the Blue Scorpions — to weld shut pipes that the two farmers used to take water from the Vaal for irrigation.

“Our message to all those people stealing our water is clear. We will find you and we will prosecute you.”

The focus on illegal water use comes as national water resources become strained. The Vaal supplies water to 20-million people, and powers a region that houses 60% of the country’s economy. But water thieves are threatening this supply, said Molewa.

Nigel Adams, head of the Blue Scorpions, said the department was investigating many farmers who they suspected of using water illegally, or using more water than they had a licence for. Some had already received warning letters from the department.

While Molewa warned that water scarcity was an issue, she said that in the department, “planning is strong” and it had things under control. Large-scale dam projects and water transfers would be bringing more water to those who needed it. Chief among these is the second phase of the Lesotho Highlands Water Scheme, which will bring 151kl of water into the Vaal by 2020.

Managing demand
The department of water affairs also has a plan to save 180-million kilolitres of water — or up to 15% of all water supplied in the region — by managing demand. This initiative, mentioned by President Jacob Zuma in the 2011 State of the Nation, will see municipalities trying to stop leakages, which lead to a third of water running into the ground.

Molewa also soothed concerns about acid mine drainage in Gauteng. The emergency solution — for which the treasury has allocated R433-million — is being implemented and should increase treatment from 12-million litres a day to 30-million. This should stop decanting in the central and eastern basins, she said.

A feasibility study is currently under way to find solutions for the long-term problem, she said. While the amount given by treasury is not enough, she said with “proper motivation” the treasury would make up the gap to the R900-million that is required. Public-private-partnerships were also being seriously considered to bridge the gap, she said.

If we don’t do enough, in a decade’s time there’ll be droughts, floods, wildfires and crop failure on an apocalyptic scale
Read more
National

The company cannot exist in the future. But this is a country where difficult decisions are rarely taken — especially when it comes to climate crisis
Read more
Environment

The horror: Tales of climate change

A year after the UN sounded the klaxon, warning of ‘some countries becoming dysfunctional’ thanks to the climate crisis, governments aren’t responding
Read more
Advertising
Continue to the category
Coronavirus