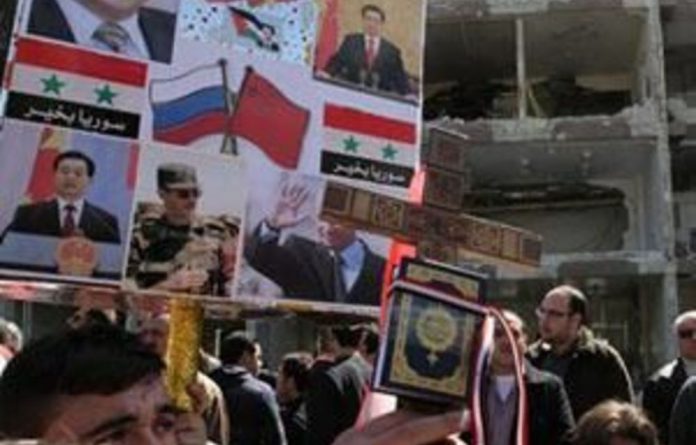 Rebels fought security forces in Damascus on Monday, in the most violent gun battles the Syrian capital has seen since the start of the year-long uprising against President Bashar al-Assad, opposition activists said.

The heavy fighting shattered the night calm in the upscale al-Mezze district and came just two days after a double car bombing had killed at least 27 people in the heart of the city.

“These clashes were the most violent and the closest to the security force headquarters in Damascus since the outbreak of the Syrian revolution,” said Rami Abdulrahman, who runs the British-based Syrian Observatory for Human Rights.

He said 18 government troops were wounded in the fighting which broke out just after midnight in the west of the capital, pitching army defectors against pro-Assad forces.

Witnesses said the sound of heavy machinegun fire and rocket-propelled grenades (RPGs) had echoed through al-Mezze for two or three hours.

“There is fighting near Hamada supermarket and the sound of explosions there and elsewhere in the neighbourhood. Security police have blocked several side streets and the street lighting has been cut off,” a housewife, who lives in the area, said.

Assad is fighting for the survival of his family dynasty which has ruled Syria with an iron fist for more than four decades and has shrugged off calls from much of the West and the Arab world to stand aside.

Fierce crackdowns
His troops have launched fierce crackdowns against rebels in a number of towns and cities in recent weeks, winning back much lost ground, but the violence has showed no signs of abating and there is no diplomatic solution in view.

A car bomb hit a residential area of Syria’s second city Aleppo on Sunday, killing two people, while the powerful explosions in Damascus on Saturday had targeted the criminal police headquarters and an air security intelligence centre.

The UN says more than 8 000 people have been killed and some 230 000 forced to flee their home, including at least 30 000 who have escaped abroad. The government says about 2 000 members of security forces have been killed.

Syria, a country which sits on the fault lines of several regional and ethnic conflicts, denies accusations of brutality and says it is grappling with a foreign-backed insurgency.

Reports from the country cannot be independently verified as authorities have barred outside rights groups and journalists.

A joint team of experts from the UN and the Organisation for Islamic Cooperation, led by the Syrian government, have started a mission to assess humanitarian needs across the country, a source close the mission said on Monday.

The group is due to visit areas hit by the uprising including the city of Homs, scene of a month-long siege and military bombardment in February, and Deraa, where the revolt against Assad erupted a year ago.

Team of experts
The UN-Arab League envoy for Syria, Kofi Annan, is expected to send a team of experts to Damascus later on Monday to discuss his proposal to dispatch international monitors to Syria in a bid to stem the violence.

Assad, who has received crucial backing from both Russia and China on the UN-Security Council, has questioned the worth of such a mission.

As hundreds gathered on Sunday in Damascus to mourn victims of bombings, activists said security forces beat and arrested people at a march of more than 200 when protesters began shouting “the people want to topple the regime”.

Among those arrested and beaten was Mohammed Sayyed Rassas, a leader of the National Coordinating Body for Democratic Change (NCB), an opposition group which had visited China and Russia in attempts to promote dialogue between Assad and the opposition.

Most opposition groups have rejected the NCB over its insistence on non-violence and its stance against foreign intervention.

Security forces also arrested Farzand Omar, a doctor and politician from the party “Building the Syria State,” when he arrived at the Damascus airport from his hometown of Aleppo.

In Aleppo, Syria’s commercial hub, state news agency SANA said terrorists were behind the car bomb that killed two people and wounded 30 others when it exploded in a central area close to a state security office and a church.