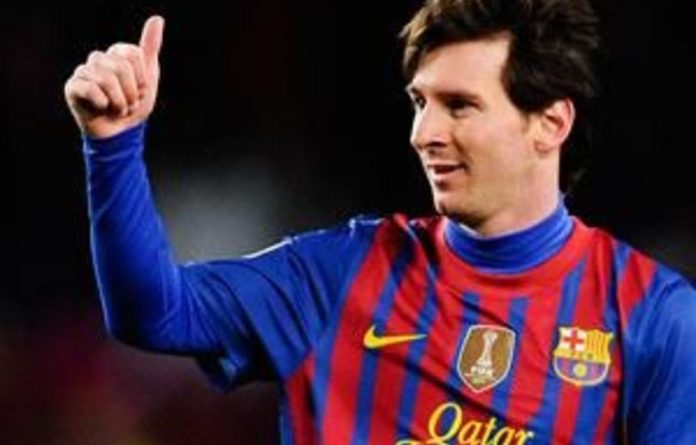 With his sixth league treble of the season, the Argentine World Player of the Year also set a Spanish record of 54 goals in all competitions with more than two months of the campaign remaining and overhauled Cristiano Ronaldo to top the La Liga scoring charts on 34 goals, two more than the Real forward.

Still only 24, Messi is well on the way to earning an unprecedented fourth straight World Player award and achieved his latest scoring feat after becoming the first man to net five goals in a Champions League match earlier this month.

Tuesday’s haul took his tally to an incredible 17 goals in his last seven games for his club.

“I am sorry for those who want to occupy his throne but this lad is simply the best,” Barca coach Pep Guardiola told a news conference.

“Michael Jordan dominated his sport, Messi does the same in football. There’s nothing more to say.”

Real Madrid play their game in hand at Villarreal on Wednesday and have 71 points from 27 matches. Barcelona, chasing a fourth successive title, have 66 from 28 games.

Xavi’s neat volley from Messi’s headed assist put Barca ahead in the fourth minute at a rainy Nou Camp and Messi doubled their lead shortly after to match Cesar Rodriguez’s 60-year-old club scoring mark of 232 goals.

Isaac Cuenca’s deflected cross fell to him on the edge of the penalty area and he stroked the ball low into the net off the left-hand post.

Shock equaliser
Barca seemed in complete control but Granada pulled a goal back 10 minutes into the second half when Diego Mainz nodded in from a free kick and the visitors grabbed a shock equaliser from the penalty spot seven minutes later after Daniel Alves fouled Daniel Benitez.

Guilherme Siqueira kept his nerve amidst the whistling to beat Victor Valdes and make it 2-2 before Messi restored Barca’s lead just over 20 minutes from time.

Racing clear from an Alves pass, he lifted the ball over goalkeeper Julio Cesar before Barca substitute Cristian Tello made it 4-2 in the 82nd minute when he followed up Messi’s angled strike.

The unstoppable Argentine completed his hat-trick four minutes later, his 234th Barca goal in official matches, and in an eventful finale Alves was shown a second yellow card and dismissed for a handball in the area.

Siqueira beat Valdes from the spot for a second time as Granada became the first team to put three goals past Barca at the Nou Camp since Villarreal in 2009.

In the earlier kickoff, Osasuna missed a chance to climb above Levante and Malaga to fourth and into the Champions League qualifying place when they were held 0-0 at home to Getafe. — Reuters