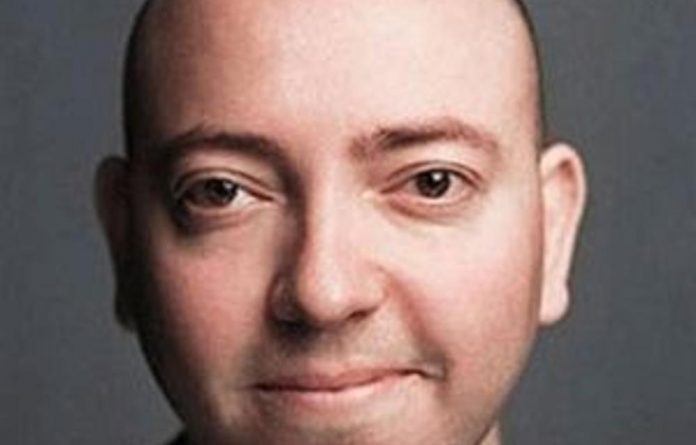 Greg Smith has stopped the clock with 10 of his 15 minutes of fame still to run. Having dished the dirt on the world’s biggest investment bank, Goldman Sachs, in an explosive resignation notice in the New York Times last week, the expatriate South African derivatives executive has gone to ground, eluding a deluge of requests from reporters and eager book agents.

A New York literary agent said she understood that Smith — who has reportedly returned to New York from London — was in hiding.

One close friend, a former classmate from King David High School in Johannesburg who asked not to be named, told the Mail & Guardian: “Greg has made a call to keep quiet for the moment and we [as his friends] will respect that. We’ve spoken recently and he’s fine, just not yet ready to talk.”

Asked whether Smith had been legally muzzled by Goldman Sachs, or restricted by a new contract, the friend refused to comment, saying only that Smith continued to stand by his principles.

But Wall Street experts said his unexpected silence following his highly public exit statement had created a vacuum that the global media had been forced to fill with the ethics problems he exposed at Goldman Sachs.

The viral debate that has followed has also triggered serious calls for new client-protection regulations in the United States and boosted online references to Smith to more than 22-million.

Brilliant student
The son of a Johannesburg pharmacist and a part-time social worker, the 33-year-old was a straight-A student who then studied at Stanford University and worked at Goldman Sachs for 12 years in New York and, most recently, in London.

In his now fabled op-ed piece, Smith, then Goldman’s head of equity derivative products for Europe, Africa and the Middle East, claimed the giant firm routinely “ripped off” and scorned its clients. “Over the last 12 months I have seen five different managing directors refer to their own clients as ‘muppets’,” he added.

The 1 285-word insider resignation cost Goldman Sachs about R17-billion in stock value on the day, more than R10-million a word, although it has since clawed back some of the losses.

Professor Anthony Sabino, a securities law expert at St John’s University in New York, told the M&G: “If he really has gone dark when he could so easily cash in on this, I would find it highly commendable. It has already allowed people to focus on the crucial issues he has so courageously made public. It is also not true that he has burned all his career bridges. I’d hire him, for one.”

In an opinion piece on Tuesday, Robert Teitelman, editor of The Deal magazine, marvelled that, despite the massive global coverage of his parting shot, Smith had somehow continued to be “a nobody — an outlier, a whiner, a cipher”.

“Despite the usual reporting and his photograph in the New York Times, we don’t know much more about him than we did from the op-ed. Nor should we. Let’s hope he doesn’t ruin that with a 60-minute tear fest or a morning with the girls on [US talk show] The View.”

Instead, Senator Carl Levin was among the legislators who said Smith’s “extraordinarily strong statement” should spur Congress to approve the “Volcker rule” to prevent banks from making speculative investments beyond their clients’ interests.

The Christian Science Monitor declared: “We believe his op-ed resignation from Goldman Sachs last week may well forecast a new era in ethics on Wall Street and in other workplaces.”

For Wall Street and the conservative financial media, Smith’s silence is as if an injured snake has slithered under the house.

Although his letter has been derided as short on detail, Wall Street, tellingly, has not yet dared him to come forward with proof.

For pro-regulation lobbyists, there is the faint disappointment that it was a court steward, rather than a head chamberlain, who finally pointed out that the king wore no clothes. The debate has also triggered a tide of TV comedy skits and online spoofs, including Darth Vader’s public resignation from the Star Wars Empire, citing his discomfort with its ethical drift.

But confusion and mystery have also fuelled the Smith meme.

Whole blogs and reports were devoted to obscure claims, such as that he had exaggerated his role as an “executive director” when he was just a “vice-president” at the firm, only for this to be corrected later when it was learnt that the titles were equivalent in Europe.

Frustrated bloggers wondered who he was. Did he not know about the investment-bank code of silence? Why did he do it? Did it reflect the speculation that, as Teitelman summed it up: “He was angry about his crappy bonus and his diminishing expectations.”

Adjusting to America
While pursuing a scholarship at Stanford in 2001, Smith wrote light-heartedly about his struggle to master Americanisms such as “my bad” and “phat” and, conversely, to explain South Africanisms such as “rubber” to mean “eraser” rather than “condom”.

And cultural jargon caught him out again last week with the unqualified key reference to “muppets” by British colleagues.

Rather than its dismissive mock-of-a-fool British meaning, of the kind cricketer Kevin Pietersen reserved for Graeme Smith, many US columnists took it as a more endearing reference to Jim Henson’s Muppet characters, such as Miss Piggy.

In one much-cited piece of shoe-leathering, one investigative reporter even made the effort to establish that Goldman Sachs had, in fact, represented the Muppets, or at least Henson, in 2003.

Others divined an only-the-guilty-minded meaning behind Smith’s use of the common South African prefacing phrase: “To be honest —”

Most columnists made outright fun of his odd references to having once achieved a bronze medal in ping-pong at the Maccabiah Games in Israel, and having also been a kind of runner-up as a finalist, rather than a winner, of the Rhodes scholarship.

But Sabino said: “There is great traction to this story and respect for Mr Smith, because people respond to courage and truth-telling and because we are still feeling the effects of a recession brought about in part by reckless behaviour and greed on Wall Street.”

Although she declined to speak to the M&G, Esther Newberg, a leading New York literary agent, confirmed to Bloomberg that two of her colleagues were among a flock of agents who had tried and failed to reach Smith for a book deal. Saying “the sky’s the limit” for Smith’s potential on the bookshelves, she said: “Agents and publishers are
trying to talk to him. The feedback we get is that he is hiding for a while.”

Smith did not respond to messages left on his cellphone.

Goldman Sachs referred media queries to its initial response: “We were disappointed to read the assertions made by this individual that do not reflect our values, our culture and how the vast majority of people at Goldman Sachs think about the firm and the work it does on behalf of our clients.”