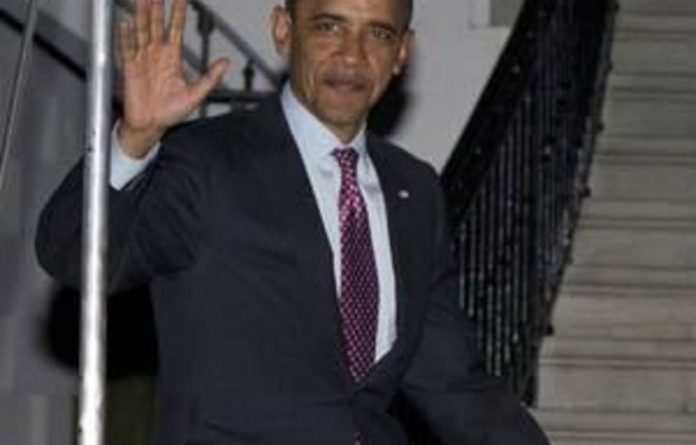 President Barack Obama is returning to the threat to American security that he calls the gravest of all: terrorists getting material for a nuclear bomb.

In South Korea, where Obama is headed, the president will join a massive gathering of world leaders whose united goal is to secure nuclear material and prevent it from being smuggled to states or groups intent on mass destruction.

Right across the border but not participating: nuclear North Korea, labeled by the White House as “the odd man out.” It is brinksmanship with North Korea and Iran, another nation not invited to the summit, that has dominated much of the nuclear debate and that will cast an unquestionable shadow over talks in Seoul.

Obama’s mission over three days in the South Korean capital will be to show progress — in pressuring North Korea to change its rogue ways and in approaching a lofty goal of locking down nuclear material around the globe by 2014.

For a president up for re-election, this will be a rare Asia trip devoted to just one country, built around a nuclear security summit that carries his imprint. Obama held the first one in Washington two years ago. This one is considered a status check and a time for nations to offer new and tangible pledges, but no breakthroughs are expected.

Scrutiny
Obama left Washington around midnight on Friday. He was to arrive in Seoul early on Sunday local time.

Campaign politics directed from and toward a US president typically cease when he is abroad, although Obama’s posture toward threats to America will be scrutinised by his rivals.

The timing comes as daily economic concerns, not foreign ones, are driving the concerns of American voters. Yet the setting does give Obama a few days to hold forth on the world stage while, back home, Republican presidential candidates keep battling each other.

Halfway into an ambitious four-year effort to safeguard nuclear materials from terrorists, many nations have taken voluntary steps to corral material that could be used for terrorist weapons. But they have sidestepped larger questions about how to track all such material, measure compliance and enforce security.

Up first on his agenda: his first visit to the most fortified border in the world.

Visiting the border
Obama’s symbolic visit to the Demilitarised Zone separating the Korean peninsula will be the fourth by a US president. The others were Ronald Reagan, Bill Clinton and George W. Bush; other U.S. officials regularly go to the DMZ.

About 60 years after the Korean War ended with an armistice, hundreds of thousands of troops stand ready on both sides of the border zone, which is littered with land minds and encased in razor wire. Obama officials said the goal is to thank U.S. and South Korean military members and show U.S. resolve from “the front line of democracy” on the peninsula.

The United States has more than 28 000 troops in South Korea, a legacy of the Korean War six decades ago.

North Korea plans to launch a long-range rocket next month, which the U.S. and other powers say would violate a U.N. ban on nuclear and missile activity because the same technology could be used for long-range missiles. On top of that, the U.S. has warned that a deal to resume stalled food aid to the North could be jeopardised if North Korea goes ahead.

North Korea has built and tested nuclear devices and is considered a suspect in the spread of nuclear know-how and weapons of mass destruction to other countries.

The summit will bring together nuclear-armed nations, plus those with civilian nuclear energy plants and several seeking to build them. Several non-nuclear nations and international organizations, including the UN and the International Atomic Energy Agency, are attending.

Scores of countries still have research reactors fueled by weapons-usable uranium, and medical devices that use radioactive materials that could be fashioned into a “dirty bomb” are scattered all over the world. — Sapa-AP