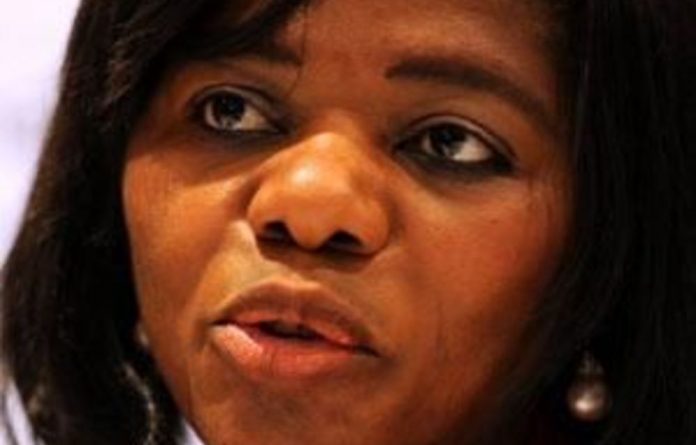 The content of public protector Thuli Madonsela’s submission to the ad hoc committee on the Protection of State Information Bill was dramatic — saying her office would be severely hampered in its duties as a result — but thanks to her measured tones in delivering it, in sheer theatre it was easily outweighed by the Alternative Information Development Centre’s (AIDC) attempt at a submission.

“There are serious political statements now that you are making now. You are making reference to the Polokwane conference and all those sorts of things,” committee chairperson Raseriti Tau told the AIDC’s Mark Weinberg. “Can we stop this presentation. We are not going to allow you to continue with this presentation.”

Weinberg says his group, a founding member of the Right2Know campaign, is not necessarily great at a clause-by-clause breakdown of legislation, so it sought to focus on the broader context of the Bill instead, such as “the rise of the securocrats” in the wake of factional fighting for control of the state. Which is where, as far as Tau was concerned, Weinberg stepped over the line.

“This so called … alliance of the wounded cobbled together pre-Polokwane is weakening and its fissures rupturing … ” he said, before being interrupted.

Weinberg says being barred from completing a presentation touching on authoritarianism in a show of authoritarianism is mildly ironic. He also believes it shows MPs could not have read the AICD’s submission before inviting it (along with 16 other groups, from among 263 submissions received, Parliament said on Wednesday) to address the committee.

“As social cohesion falters we have witnessed the emergence of greater authoritarianism, militarisation and the rolling back of human rights in democracies across the world,” reads part of the AIDC’s written submission. “It is vital that members of the National Council of Provinces Committee dealing with the Protection of State Information Bill stand up to pressure from the securocrats in the executive and ruling alliance,” reads another section.

In a statement on Wednesday, Tau said he was disappointed at the AIDC’s approach. “The AIDC’s oral presentation focused more on political ideologies and political landscape of South Africa instead of issues related to the Bill. All organisations and institutions that have appeared before the committee so far have been specific to areas of the Bill which they wish the committee to focus on.”

But Weinberg offered everything said around the Bill was inherently political. “I think there is a problem if we approach our legislation in a very narrow political way. Context is important, and providing it is appropriate. I had assumed that was why we were invited to participate.”

Protector’s peril
Also on Wednesday, the public protector told the committee that the Bill, in its current form, would shrink her powers and bedevil investigations into state wrongdoing.

It would reduce her to the status of an ordinary citizen because it would oblige her to hand classified information to the police like anyone else.

Likewise, it would strip away the right she held to access classified information in the course of her duty, instead forcing her to go to court to obtain it like any other South African.

“The public protector is directly affected by this Bill,” she told the second day of public hearings in Parliament on the contentious draft law.

“We will not be toothless but we are going to function under more onerous circumstances.”

She said the obligation clause 15 of the Bill created for those who received classified information to hand it to the police to avoid prosecution posed the risk of her being arrested while she was studying any of the secret documents delivered to her office almost daily.

“Will I be affected? Yes, severely. At the moment I’m not chasing around trying to find out what documents came to my office and which police station do I rush to report it. I don’t want to do that.

‘Canny amendments’
Other criticism of the law also continued to mount outside Parliament on Wednesday. The South African Institute of Race Relations (SAIRR) said in a statement that recent amendments to the Bill “genuflect towards the Constitution’s guaranteed right ‘to receive or impart information’. However, they are likely to mean little in practice.”

If information were classified in order to cover up corruption or illegality, it would not be possible to successfully prosecute anyone who broke the secrecy restrictions, because the initial classification would be invalid.

“In practice, however, journalists and other commentators will need considerable courage to obtain or communicate classified information, irrespective of how obvious the illegality and invalidity of the classification decision might seem. Few will want to run the risk of arrest and prosecution, even if they know they are likely to be vindicated in the end. Media companies, political parties, and civil society organisations will also need deep pockets to fund defences against such prosecutions and may soon fight shy of dealing with classified information at all.”