Free to sing: A chorus of convicts 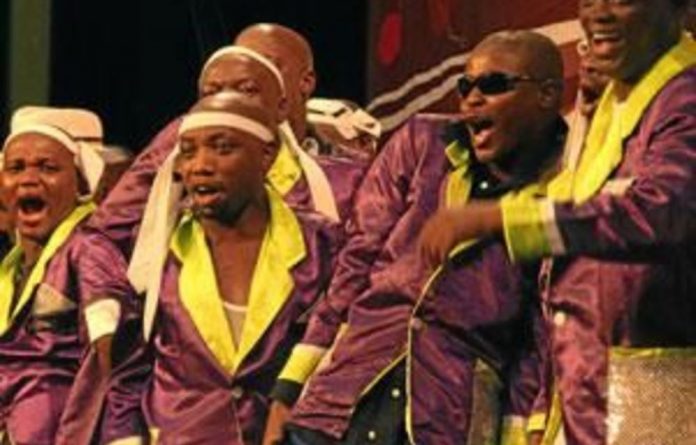 It was the men with guns who gave it away, really. Not through their presence, as such. Even an ordinary choir competition would rate armed protection if it had two Cabinet ministers in the audience. But if this had been an ordinary choir competition, the men with guns would have been focused outward, protecting the elite within from the dangers lurking in the world without.

The department of correctional services hosted the national offender choir competition to showcase offenders’ musical skills. Choral music is one of many rehabilitation tools used to assist offenders in their reintegration into society.

On this autumn day in Durban, though, the men with guns had eyes only for the audience sitting demurely in their seats. Because those inside the auditorium at the Durban International Convention Centre were the threat: 360 men and women who had committed acts so vile that society had decided to lock them away behind high walls and razor wire. No matter that some of them could sing like angels or dance like dervishes. The men with guns were there to protect them from one another — and to make sure that they could not get out.

If it were not for that and a few more subtle clues (the motley collection of contestants, the occasional scars or hard eyes), the National Offender Choir Competition could have been an interschool gathering — if schools were kinder, gentler, places. The kinds of places where an overt show of nervousness at being all alone in front of a thousand people is met not with whispers and titters, but with a buoying burst of applause. The kinds of places where a voice that breaks or a horribly fluffed note is studiously ignored and a brave recovery is cheered.

Prisoners from the Eastern Cape (left) scored highly, with props that included the kind of weaponry usually denied them in correctional centres. (Phillip de Wet, M&G)
The men with guns, it turned out, had nothing to worry about. Their prisoners may not have been in shackles or prison uniforms, and a little bit of determination and organisation would almost have guaranteed a successful escape. But this crowd was not about to put a foot wrong. Their futures depended on their behaviour and they had worked too hard to mar their records now. Also, their fellows would be liable to extract vicious retribution on anyone who spoilt the fun for everyone.

“For a few days, you feel that you are free,” acting prisons commissioner Nontsikelelo Jolingana told the prisoners. “We hope that your behaviour won’t embarrass us and force us to cancel activities of this nature.”

Pretoria Central escape almost ruined it
It must have been tempting to cancel the entire event when, just a week before, three inmates made it all the way out of Pretoria Central Prison in a blaze of public humiliation for the department of correctional services. But here was the same minister who had waggled her finger at those three dazed and bloodied would-be escapees in front of the television cameras, this time promising to reform the rules regarding keeping criminal records for at least some types of crimes to make it easier for former cons to get jobs.

“It is not easy. Bear with us,” said Correctional Services Minister Nosiviwe Mapisa-Nqakula of those reform efforts. “We realise it is the only way of assisting you so that you do not go back to a life of crime.”

She spoke movingly of prisoners reaching out to their communities, of making prisons places of skills development rather than retribution, and of rewards for good behaviour.
“This goes into your file towards a consideration when the time comes for parole,” she told the prisoners, to an audible sigh. “The people who are here are people we believe want to be rehabilitated and are ready for reintegration into their communities.”

Hence the lipgloss and cufflinks, the high heels and tie pins, the costume jewellery and tailcoats, the shoulder wraps and tuxedos and the many, many hours spent labouring over arias from operas such as Don Giovanni.

Some contestants said they were driven by a love of music, or by the temporary escape from prison life offered by choir practice, but ultimately it all came down to convincing parole boards that they had found important lessons through singing, lessons such as dealing with the pressure to perform and win.

“There is too much pressure at the end of day. That’s why some of us ended up here, in prison, because we had too much pressure from families and friends and whoever, because we always wanted to make a success of ourselves,” Margo Gouws told us from beneath eyelashes so long that they brushed her cheeks when she blinked. Gouws is in the third year of a 10-year sentence for drug running. When she gets out, she wants to get involved in entertainment.

“I am more of a talker,” she said. “I like interviews, I like beautiful things. I like to be standing on a podium making a speech. That is my kind of thing.”

Such ambition is exactly what the prison service would like to kindle with this national competition. Much like in schools, stiffly formal choir practice serves multiple purposes: providing group cohesion, teaching teamwork and discipline, lifting morale.

Singing for redemption
For prisoners, though, it is also part of a ticket out and a glimpse of a world in which they may be able to stand shoulder to shoulder with the very people they have wronged and be judged for their singing rather than for their past misdeeds.

Gouws will be studying public relations this year, but she is counting on the network of contacts she is building through her performances to open doors once she is free.

Likewise, Tshepo Ntshala, not yet halfway through a 20-year sentence for rape, is immersing himself in social work and religion in his prison outside Brits. But when he returns home, he will be counting on opera and gospel to get a foothold. “Where I come from, which is Klerksdorp, there are so many community choirs,” he said. “I’ll be going back there and expressing myself in music.”

If they succeed in their ambitions, Gouws and Ntshala and their fellow inmates will be truly exceptional. South Africa’s rate of recidivism is high, so high that “once a criminal, always a criminal” is essentially true, statistically.

A vicious cycle of overcrowded prisons providing ever worse conditions for rehabilitation is not helping. Which may explain why warders, the traditional enemies of inmates, were giving pep talks and shoulder rubs and spent most of a day on their feet as they beamingly applauded their charges from the floor.

Everyone needs a victory — and not just in the sense of one of the 28 trophies for which the teams were competing.