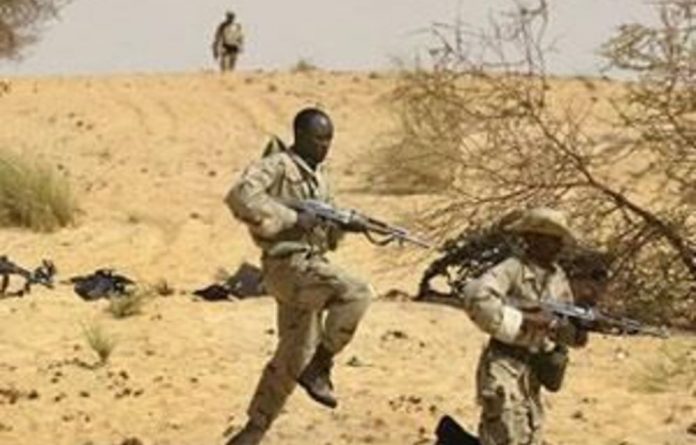 Islamists gained ground in northern Mali, jostling with Tuareg rebels for control of the vast desert region as the troubled nation’s military rulers faced fuel and money shortages from sanctions on Tuesday.

The United Nations Security Council was on Tuesday due to hold an emergency meeting on Mali, which is sliding further into chaos under the junta that seized power on March 22.

A band of low-ranking soldiers ousted the democratically-elected government for its alleged incompetence in dealing with a Tuareg rebellion in the north, however more than half of Mali’s territory has fallen to insurgents since the coup.

Frozen out by the international community, the junta has been slapped with sanctions from its neighbours which could bring it to its knees.

The vast landlocked country depends heavily on the import of fuel and basic goods from surrounding nations.

The total embargo announced Tuesday by the Economic Community of West African States (Ecowas) also cuts the putschists off from the regional central bank in Dakar, affecting their ability to pay public wages.

In Bamako, long lines formed at petrol stations shortly after the 15-nation Ecowas announced the embargo, while other stations closed early, fearing looting by soldiers.

“We hear there is an embargo, we are afraid of shortages so we are taking precautions,” said a youth who wanted to fill half a dozen empty bottles.

Sanctions
As Bamako braced for the bite of diplomatic, economic and financial sanctions, armed Islamists began imposing Sharia law in towns where they had taken control alongside al-Qaeda fighters.

The Islamists had been fighting with the Tuareg, despite having different objectives, but on Monday they chased their erstwhile allies out of the fabled city Timbuktu, flanked by the notorious al-Qaeda in the Islamic Maghreb (AQIM) leader, Mokhtar Belmokhtar.

“Timbuktu has passed its first night under Sharia, everything is calm in town,” civil servant Saliou Thiam said from the ancient trading city from where Islam was once spread through Africa.

The fighting in northern Mali began in mid-January by the Azawad National Liberation Movement (MNLA), which wants independence for its homeland in the northern triangle of the bow-tie shaped nation.

The Islamist Ansar Dine wants to implement Sharia law in the mostly Muslim but secular state.

Asar Dine is under the command of Iyad Ag Ghaly, who played key roles in the two previous Tuareg rebellions in the 1990s and 2007-2009. He has since taken up the Islamist cause, distancing himself from Tuareg nationalism and has developed links with AQIM.

In Timbuktu on Monday, Ghaly and his fighters “took the city, chased away the people from MNLA who were there, burned the MNLA flag and put their own flag up at the military camp,” said cameraman Moussa Haidara, who filmed the events.

French Cooperation Minister Henri de Raincourt said, “there has been information indicating that there could be rebel movements approaching”, while confirming that rebels were “around Mopti”.

More than 200 000 people have been forced from their homes by the fighting and aid groups have warned that the combination of civil war and drought could lead to one of the continent’s worst humanitarian emergencies.

The West African bloc has also set up a military standby force, after earlier putting some 2 000 regional troops on alert.

Mali’s junta said late on Monday that it had “taken note” of the regional embargo.

Coup leader Captain Amadou Sanogo added in a statement that the junta remains “at the disposition of … mediation to find solutions out of the crisis” but said that its priority remained “recovering the country’s territorial integrity faced with the crisis in the north.”

While the junta has restored the country’s constitution and promised not to stand in new polls, Ecowas leaders remain unconvinced and have demanded they “hand power over to recognised constitutional authorities”. — Sapa-AFP