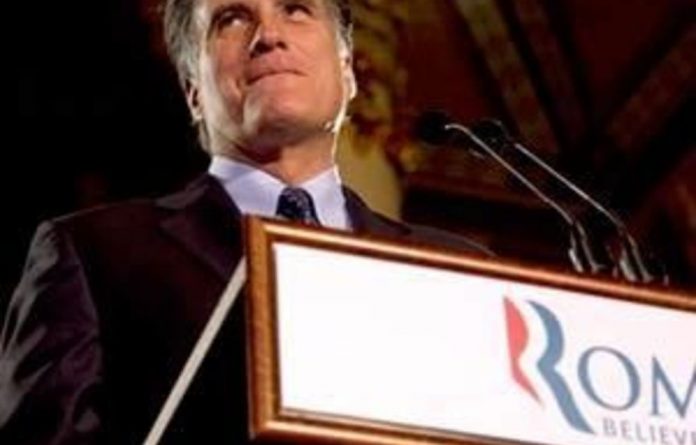 Mitt Romney won decisively in three Republican presidential primaries on Tuesday — Wisconsin, Maryland and Washington DC — positioning him to try and knock his main rival, Rick Santorum, out of the contest later this month.

Santorum vowed to defy pressure from what he described as “the Republican establishment and aristocracy” to drop out of the race by saying he would go on to fight the crucial battle in his home state of Pennsylvania on April 24 and beyond.

Romney beat Santorum in Wisconsin, the tightest of the three contests. The Republican frontrunner had an easy win in Maryland where he took about half the vote. Romney also won in Washington DC where Santorum was not on the ballot because he failed to gather enough signatures.

The combined victories push Romney past the halfway mark in his pursuit of delegates for the nominating contest and considerably widens the gap with Santorum. Newt Gingrich and Ron Paul remain in the race but are no longer considered contenders.

Without directly acknowledging Tuesday’s defeats, Santorum noted that half of the delegates to choose the Republican presidential candidate are now assigned but said that left the other half up for grabs.

“Who’s ready to charge out the locker room in Pennsylvania for a strong second half?” he said. “Pennsylvania and half the other people in this country have yet to be heard and we’re going to go out and campaign here and across this nation to make sure that their voices are heard in the next few months.”

Focus
Santorum represented Pennsylvania in the US Senate for 12 years and if he loses in the state then the growing pressure on him from the Republican leadership to withdraw from the race will intensify. Earlier on Tuesday Romney implicitly called on his rivals to pull out by saying that the party needs “to get a nominee as soon as we can and be able to focus on Barack Obama”.

But Santorum remained defiant. He said it would be a mistake to allow the Republican leadership to impose a candidate like Romney who is regarded as a relative moderate and therefore acceptable to more voters. “If we’re going to win this race we can’t have little differences between our nominee and President Obama. We have to have clear contrasting colours,” said Santorum.

Santorum said that candidate was Ronald Reagan whom, he said, the Republican establishment had considered too extreme to be elected.

Romney made no mention of Santorum in his post-election speech, which he instead used to reinforce the perception he is the inevitable nominee by launching a concerted attack on US President Obama.

Romney focused on the continuing economic downturn, blaming Obama for widespread — if falling — unemployment. “The ironic tragedy is that the community organiser who wanted to help those who were hurt by a plant closing became the president on whose watch more jobs have been lost than at any time since the Great Depression,” he said.

Romney mocked Obama for genuinely believing he was doing a great job as president. “Years of flying around on Air Force One, surrounded by an adoring staff of true believers telling you what a great job you are doing, well, that might be enough to make you a little out of touch,” he said.

Key moment
Larry Sabato, director of the University of Virginia’s Centre for Politics, said Romney’s victories on Tuesday sets him up to try and drive Santorum out of the contest by defeating the former Pennsylvania senator in his home state. “Romney is trying for a one-two punch: Wisconsin and Pennsylvania. That’s always been their plan,” Sabato said. “The key moment will be Pennsylvania. Either Romney is going to knock out Santorum in his own home territory or the contest will go through May with Santorum potentially winning in some of those contests.”

A Quinnipiac University poll released on Tuesday shows Santorum’s lead over Romney cut in half to six percentage points in the Pennsylvania primary later this month. Santorum has 41% support among Republican voters to Romney’s 35%. The survey suggests the momentum is with Romney and it is only likely to pick up after Tuesday’s primaries.

Santorum has justified staying in the race by saying that Romney is a weak candidate who has generated only a low voter turnout in states he has won, undermining confidence in his ability to win a contest against Obama.

“Now a huge percentage of the delegates are unbound,” Santorum said while campaigning in Wisconsin on Monday. “A majority would be unbound after the first ballot. It would be average activists, Republicans who run for delegates who are involved in the party.”

But Sabato said that even if Romney arrived at the Republican convention in August without sufficient delegates to claim the nomination he would have no problem garnering support there. “It makes no difference whether he is short or not because there will be hundreds of either uncommitted delegates or super delegates. Within 48 hours Romney will have five times the number of extra delegates he needs.

“Everybody wants to be that last delegate that will always be remembered by the candidate in case he’s elected president.”

Sabato said that if Santorum remained in the race and could not beat Romney back he could steal some of his thunder. “Santorum makes a little bit of difference in that a nominee wants to swoop in to his convention triumphant. He doesn’t want to limp. You tend to limp in when you’ve still got an opponent nipping at your heels even if by then he’s a chihuahua,” Sabato said.

‘Laughable’
Obama confirmed the White House regards Romney as the Republican candidate for the first time, singling him out by name in accusing him of supporting “thinly veiled social Darwinism” by backing budget proposals that sharply reduce taxes for millionaires while cutting public spending on education, justice and medical research.

The president described as “laughable” Republican claims that deep budget cuts are are necessary to combat the deficit.

Obama painted the Republicans as serving the rich over the middle class with a budget that includes “more than a trillion dollars in tax giveaways for people making more than $250 000 a year” — an issue on which Romney is particularly vulnerable because of his estimated $220-million fortune.

“That’s an average of at least $150 000 for every millionaire in this country,” Obama said. “It is a Trojan horse disguised as deficit reduction plans. It is really an attempt to impose a radical vision on our country. It is thinly veiled social Darwinism. It is antithetical to our entire history as a land of opportunity.”

Obama said that along with the tax breaks would come “massive new cuts in domestic spending” supported by Romney. “I don’t think people fully appreciate the nature of this budget,” Obama said.

The president said that if the cuts were spread out evenly it would mean reductions in aid to millions of college students, the slashing of medical and scientific research grants and more than 200 000 children losing early places in school. The department of justice would have less money to combat violent and financial crimes.

“Two million mothers and young children would be cut from a programme that gives them access to healthy food,” he said. “Republicans may say ‘Well we’ll avoid some of these cuts’, since they don’t specify exactly the cuts they would make. But they can only avoid some of these cuts if they cut even deeper in other areas. This is math.”

The Republicans responded by calling the president’s comments “cynical and deeply partisan”. —