Mining for meaning in Jo’burg 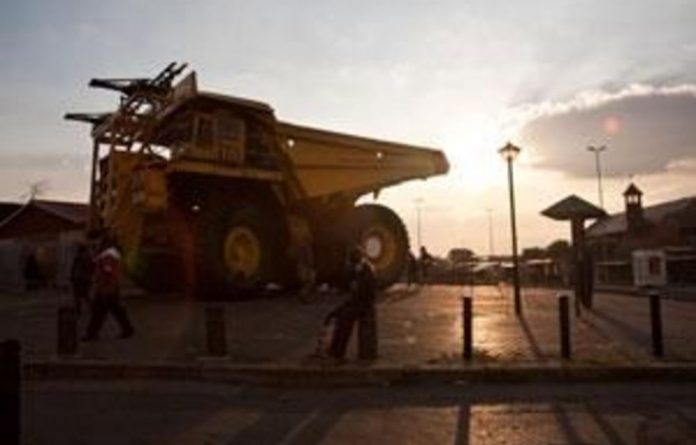 If you want to know about the origins of the city of Johannesburg, a good starting point is Marshalltown in downtown ­Johannesburg.

It is telling that the street occupied by the country’s mining houses — Anglo American, BHP Billiton, the Chamber of Mines and others — is known as Main Street. Many of the “gentlemen’s clubs”, banks, finance houses, including the original stock exchange, were and are to be found in the vicinity of Marshalltown.

The fact that the foundations of the city are found deep below, it is a rather clumsy and obvious way of summing up the thesis by two scholars, Achille Mbembe and Sarah Nuttall, who write in the introduction to ­Johannesburg: The Elusive Metropolis (Wits University Press), the fascinating study of the city they co-edited, that “it is at these deeper levels and in the way the world below interacted with the surface — that the origins of the city as a metropolis are to be located”.

Since the beginning of the year, the innards of the city have been spilling out on to the surface.
The South West Improvement District is behind this new initiative and a few weeks ago, as part of a public-relations drive, it brought into the city a huge unit-rig truck. When the truck, which weighs a hefty 125 tonnes, was commissioned, it was the biggest of its kind. It got “down and dirty” at Kumba Iron Ore’s biggest operation, Sishen mine, in the Northern Cape.

Although its top speed was 18km/h, the gargantuan machine guzzled 85 litres of fuel an hour. To put that into perspective, an average car has a 40-litre tank, which takes a week or so to run out.

Between the surface and the netherworld
The truck, in service for 20 years, was used to haul the ore from the depths of the 400m-deep mine and also to clear mine waste.

The improvement project, which started more than 15 years ago, has brought to the city features such as the conspicuous, towering mine headgear at the corner of Sauer and Main streets.

The 40-tonne headgear, designed by a specialist engineering firm in the 1950s, was, in the words of Mbembe and Nuttall, central to the “dialectic between the underground [and] the surface”, hoisting men and material between the surface and the netherworld.

Main Street is that cobbled part of town that is occupied by the highly remunerated men and women employed by the city’s mining barons.

During the day these people strut about, but at dusk and over the weekend the street is forsaken and the abandoned ambience makes it ideal for a lazy stroll with one’s lover. Trees planted on both sides of the street reach out towards each other, brushing amorously.

On the late Sunday afternoon I visited it to take in the architectural splendour and history of the district, I appeared a bit nerdy, taking down notes as lovers looked into each other’s eyes meaningfully and longingly.

Even though it appears cold and impersonal, it is the only part of the city in which one gets to know the dons who were crucial to the rise of the city.

Plaques celebrate people such as William Emile Hollard and Hans Sauer, after whom Sauer Street, the road that goes past the ANC’s Luthuli House headquarters, is named.

Souvenirs from the past
An ox wagon has been recently transplanted to the corner of ­Hollard and Main streets, the site of the original Johannesburg Stock Exchange.

Hollard Street is named after an Austrian-born Pretoria advocate and landlord. Originally part of what was known as Marshall Square, it was covered with wagons, oxen, horses and temporary stalls selling produce. A cobbler’s hut and spaza shop are the only markers of this vending ­heritage.

The design of the wagon was based on a photograph from the 1880s and, using a prototype from car enthusiast James Hall’s collection in Pioneer Park in the south of Johannesburg, “care was taken to keep the integrity of the old wagon”.

What a sad end for the ox wagon. The restored vehicle, complete with a construction to shelter it, was ­important for more than its obvious mobility function. At night, with other wagons to form a laager,

it served as shelter to protect Voortrekkers moving into hostile territory, hence the phrase “laager mentality”.

When the Grahamstown-born Colonel Ignatius Philip ­Ferreira (after whom a side street in ­Marshalltown is named) heard that gold had been discovered on the reef in the 1880s, he got on to one of these wagons and set out for ­Johannesburg.

No master of the road, the wagon travelled at 5km an hour and could cover 32km a day. Even though it was slow, it was the wagon that brought “pioneers” into the new frontiers that we now know as ­Gauteng, KwaZulu-Natal and other parts of the country.

In one of the vastest countries on the continent, the ability to move across its huge expanse was important to the ability of newcomers to conquer and maintain order.

The outsize 20th-century truck is an addition to other mining artefacts that are on display, including braziers (now used as bins) that used to heat the hostels, a miniature underground train used to move people and ore, an enlarged replica of the Mapungubwe rhino and the Standard Bank mine-shaft museum.

Although the gold and diamonds are mostly depleted, the collection of artefacts gathered in Marshalltown is a reminder that the city is built on a mining economy.

What occurred under the surface is clearly not going stay there forever, but will rise to the surface. Marshalltown is a stylised picture of an ideal the city hopes to maintain. But this is only half of the story that mining tells. The less tasteful half involves plunder and ­dispossession.