The Brics are reshaping a reluctant world order 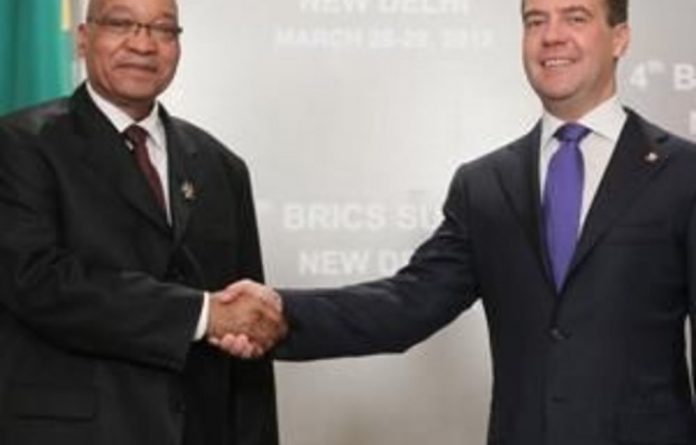 The fourth annual summit between the leaders of Brazil, Russia, India, China and South Africa (Brics) came to an end in New Delhi last month. The group of fast-growing developing economies, some of which now number among the 10 largest in the world, represents almost half the world’s population and a growing share of its production.

The Brics grouping’s political clout has grown with its importance to the world economy and the latest summit declared its intention to set up a development bank to mobilise “resources for infrastructure and sustainable development projects in Brics and other emerging economies and developing countries to supplement the existing efforts of multilateral and regional financial institutions for global growth and development”.

Bashing Brics
But commentators such as Jeremy Warner of the London-based Telegraph dismiss the Brics: “Virtually nothing — unites them other than resentment and suspicion of Western monopoly, some of it justified, some of it not.” Instead of devising grandiose schemes such as development banks guaranteed to founder on their disunity, they say, the Brics leaders should have proposed a common candidate for World Bank president. Although the United States would definitely block such a candidate, at least the Brics would have learned to unite.

Such condescending commentary demonstrates how to ignore change in the world economic and political order. The emerging economies have already set in action broader changes in the institutional architecture of the world order. Because Western powers maintain their grip on its major institutions, these rising powers have simply side-stepped them, setting up new ones and using old minor ones in new ways. The result is a decentralised and regionalised institutional structure that does not look like a rival to Western-dominated centralised and worldwide institutions at first sight.

But it is. For example, it bypasses the dollar-centred world monetary and financial system. For decades this slowed developing countries’ growth, costing them two “lost decades of development”. Instead of directing productive capital to the developing world, as it was supposed to do, it directed capital from poor to rich countries. Worse, this capital financed consumption, not production. After the recent financial crisis, this regime has created new problems by fuelling speculation, artificially driving up emerging economy currencies and food, fuel and raw material prices. Naturally, the Brics complain about these new obstacles to their continued growth.

Replacing the dollar
In March 2009 the governor of the People’s Bank of China called for international monetary reform to replace the dollar with a currency commonly created and managed by member countries, as John Maynard Keynes had called for in the 1940s. The call’s criticisms of the dollar-centred system were broadly echoed by the Stiglitz Commission set up by the president of the United Nations general assembly later that year. Properly designed, such world monetary reform would boost productive investment and growth worldwide. It is not the alleged disunity of the Brics but the hold of those with huge financial interests over American and other Western governments that makes such reform unlikely. They benefit from their control over and privileges in the world’s existing monetary and financial institutions, and the governments they dominate are unlikely champions of reform.

The Brics cannot afford to wait for this dominance to end. Their high growth rates began reshaping what we may call the geopolitical economy a decade and a half ago — Goldman Sachs economist Jim O’Neill coined the term Bric in 1999 — despite, not because of, the dollar-centred regime. And they began changing the institutional environment to suit their needs.

Over this period, International Monetary Fund influence fell and it had to compromise key policy prescriptions — pre-eminently on capital controls — as regional development banks and arrangements between two or more developing economies to conduct trade and investment in their own currencies undermined its monopoly. Although China made the most such arrangements and founded the Chiang Mai Initiative Multilateralisation as a regional organisation for similar purposes, other Brics and emerging economies are following suit.

So, as the rising profile of the Brics reshapes the geopolitical economy and its institutional architecture, backing this or that candidate for president of an unreformed World Bank hardly matters. As if recognising this, Robert Zoellick, the current president, has endorsed the Brics development bank initiative, fearing that not to do so would be a “mistake of historic proportions”. —