The rise of the Afrikaner Christian Jew 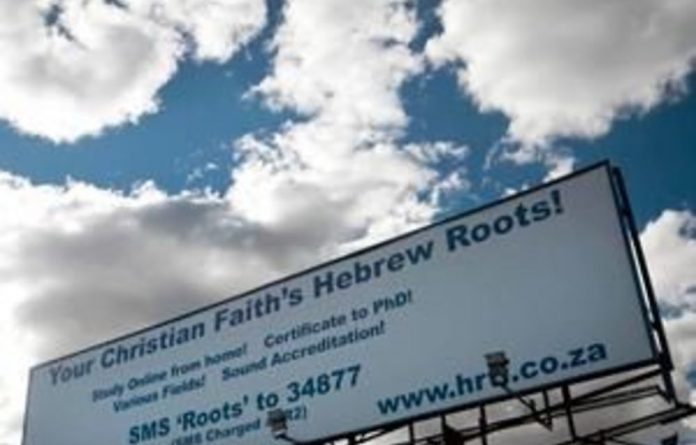 In 1996, an unusual preacher came to Willem Liebenberg's Pentecostal church. His name was Bennie Kleynhans and although, like Liebenberg, he believed in Jesus, that day he was riffing on his love for the Jews.

Liebenberg, a mechanical engineer, listened in rapt attention as Kleynhans preached on the intricacies of the Jewish marriage ritual that, he explained, actually expressed the essence of man's betrothal to the Messiah. Christians had made a mistake, he concluded, in forsaking their Jewish roots.

Liebenberg felt electrified. After the sermon he ran out and bought all the books he could find on Jewish ritual and the history of the Jews. "Since that day I approached scripture through the eyes of the Jew," he said. "I just became fascinated with all the Jewish things."

Messianic Judaism gaining popularity
He is not alone. Since the mid-1990s, Messianic Judaism has been on the rise in South Africa. It is a form of Christianity whose adherents believe in the divinity of Jesus while both studying the Old Testament and following Jewish rituals and cultural practices such as keeping kosher, wearing a skull cap, baking the plaited challah bread on the sabbath and studying Hebrew. There are now more Messianic Jews in South Africa than anywhere else in the world outside the United States, where the movement began in the 1960s.

Having abandoned mechanical engineering, Liebenberg now runs an online messianic training school called the Hebraic Roots Teaching Institute in Pretoria North. It is the largest formal messianic educational institute in the world. Students from all over South Africa, the US and Europe sign up for study modules such as Hebraic Roots (the basics of the Jewish perspective on the Bible), Midrashic Eschatology (or Jewish end-time studies), and Torah-based healing, in which concepts from the first five books of Moses are applied to heal "body, soul, and spirit".

Liebenberg has also franchised what he calls yeshivas — the Hebrew word for traditional schools focused on the study of Jewish texts — all over the country, arming would-be messianic rabbis with a seven-year programme for establishing a physical site of Jewish learning in their own communities. There are 50 such yeshivas in South Africa and Namibia; this year Liebenberg is flying two colleagues north to start opening yeshivas in Kenya.

I first noticed Messianic Judaism's presence in South Africa when I lived in the Free State and saw little hand-scrawled signs appearing on the notice boards in the Wimpy in dorpies such as Bethlehem and Clocolan: "Leer Hebreeus [learn Hebrew]," they said and gave a cellphone number. They were always in Afrikaans.

I asked Liebenberg whether, in his experience, Messianic Judaism was especially popular with people of Afrikaner descent and he said yes. Although South Africa is seeing a broad religious revival — witness Angus Buchan or the sprouting of tiny, individually run churches all over rural Venda — "more and more dominees (reverends) are enrolling with us to learn about their faiths' Hebrew roots", he said.

I wondered whether it was a coincidence that the interest in the old Jewish rituals took off among Afrikaners just after 1994, or whether it was part of the broader new search for untainted traditions and a usable past. Liebenberg thought that was possible.

It was easy for Afrikaners to recognise themselves in the Israelites' story, he said. "They're the only two nations in the world that made a covenant
with God."

Eve Fairbanks, an American writer, is working on a book in Johannesburg

Signs on the road to a ministry

Danger of exposing the dark side of prophets and pastors

What happened to church during Covid?