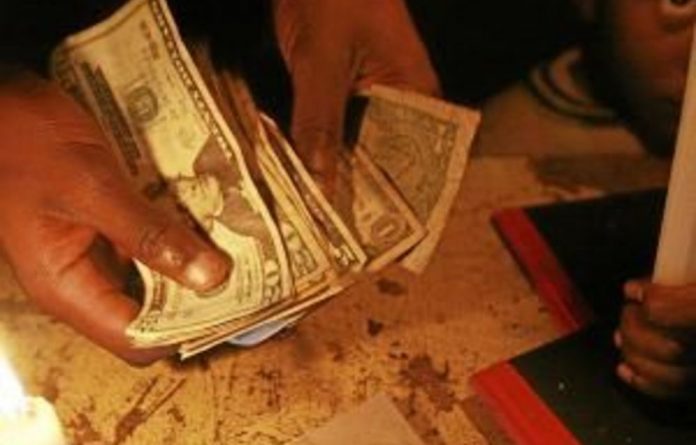 Zimbabwe’s banking sector remains starved of cash as ordinary Zimbabweans continue to shy away from depositing their hard-earned money in what economists say is a sign of the persistent distrust that many still hold towards banks.

The distrust was set off by two crises that hit the country’s banking sector. In 2006 multiple banks and 16 money transfer agencies were shut down by the governor of the Reserve Bank of Zimbabwe, Gideon Gono, for skirting bank laws and flouting operating licences. The second crisis occurred in 2009 when the country switched to a multicurrency regime, adopting the United States dollar and the South African rand as its main currencies, which resulted in the loss of trillions of Zimbabwean dollars in savings.

President Robert Mugabe’s Zanu-PF, which is pushing for an early election this year, has now expertly used the latent ill-feeling among depositors who lost their savings as a central plank to canvass for votes and has called for the return of the local currency. But Mugabe ally Gono has resisted the overture to bring back the Zimbabwean dollar, insisting that the country’s economic recovery has to pick up before the local currency can be reintroduced.

Gono told the Mail & Guardian this week: “[The reintroduction of the Zimbabwe dollar] is not going to be next year, it is not going to be in 2014. If we were to achieve a certain level of economic stability, investment, growth in our reserves and import covers tomorrow, there would be no reason why we could not have our own currency [again], but there would be preconditions.”

Liquidity threatens economic recovery
The liquidity crunch that has now gripped the country’s 26 banks threatens to halt the economic recovery and the situation has been fuelled, according to the Bankers’ Association of Zimbabwe, by Zimbabweans who have stashed away nearly $3.5-billion in their homes — under their pillows and mattresses — and hold more cash at hand than the banking sector, which accounts for only $3-billion in circulation in the formal economy.

Zimbabweans’ penchant for hand-ling cash is often seen at the month end when long, winding queues form outside banks — reminiscent of 2008 scenes — as depositors scramble to withdraw their salaries.

Last month, the Commercial Bank of Zimbabwe, which is the largest bank in terms of depositors and the main bank that settles government and private company transactions, had its real-time gross settlement system collapse for four days, weighed down by the cash shortage, which caused panic among depositors because they were unable to access their salaries.

The bank pays other correspondent local banks in the country through the settlement system. Said economist Eric Bloch: “In Zimbabwe, depositor security concerns have been the major contributor to the pronounced illiquidity in the money market in recent times.” The reserve bank, which is the lender of last resort, remains undercapitalised and is weighed down by a debt bill of $1.5-billion it acquired at the height of the country’s economic meltdown in 2008 when it engaged in quasi-fiscal activities.

Unlike in 2008, when the reserve bank could print wads of Zimbabwean dollars, it is unable to print the US dollar and does not “have any formal engagement” with the US Federal Reserve that would result in the latter pumping more money into the country to ease cash shortages.

Attempts to raise cash and “clear up the reserve bank’s balance sheet” by selling off its seven private companies last year hardly caused a stir in its material position and monetary authorities have had to resort to other measures to prevent a collapse of the banking sector. These include imposing withdrawal limits on individual transactions, ordering foreign-owned mining companies to bank locally and ordering banks to repatriate funds held in offshore accounts.

Offshore accounts
The reserve bank estimates that $266-million is held in offshore accounts by banks and says nearly $80-million was returned to the country in the first week of its order. But the banking sector remains volatile and indications are that Indigenisation Minister Saviour Kasukuwere has earmarked it as the next to cede a 51% stake to locals under indigenisation laws. South African Stanbic and Nedbank’s MBCA and British banks Barclays and Standard Chartered are up for grabs.

A war of words has erupted over Kasukuwere’s looming manoeuvres. Finance Minister Tendai Biti said the sector was “already indigenised as only four out of 26 banks are foreign-owned” and Gono vowed to protect the banks from “unintended consequences”.

Good results, but trouble ahead
Banks in Zimbabwe this week released their audited financial statements for the year ending December 2011. Most recorded profits, despite persistent uncertainty prevailing in the country’s banking sector.

Economic observers welcomed the good results recorded by the banking sector, but reiterated that the banks were not “yet out of the woods” and more work was needed to restore depositor confidence.

Stanbic, a unit of South Africa’s Standard Bank, posted a $11.1-million in profit and the British-owned Barclays posted a profit of $1.4-million.

Commercial Bank of Zimbabwe chairperson Luxmore Zembe conceded that, as the largest bank in the sector, it had not been spared the predicament of the liquidity crunch.

“The challenge was largely a result of the effects of hot money caused by high-value withdrawal transactions that were effected by the bank’s significant clients at a time when there was no lender of last resort. In response, the bank has put in place measures to improve its liquidity position that include … agreeing with government to stagger the payment dates for public servants’ salaries.”

For the past four years, Zimbabwe’s Reserve Bank has failed to be the lender of last resort, because it is weighed down by huge debt. — Ray Ndlovu

The case for investment in Zimbabwe’s economic rebirth