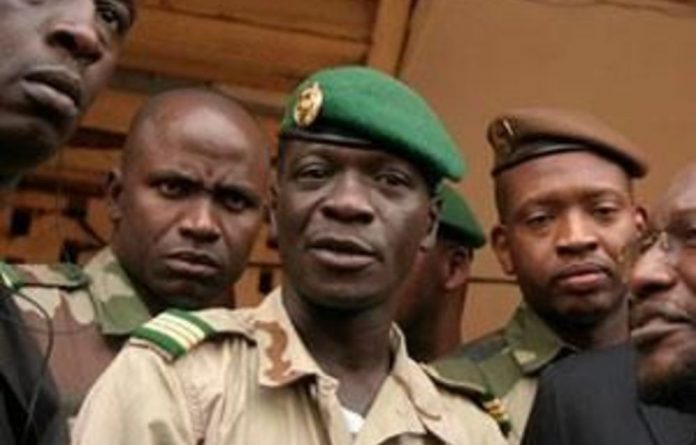 The head of Mali’s military junta made it clear on Monday that he would have a powerful say over how the country was run in the weeks ahead and did not want foreign forces helping reclaim the country’s north from separatist rebels.

In televised comments, Captain Amadou Sanogo said he is asking Mali’s partners for equipment and logistical help. The West African regional bloc known as Ecowas has been preparing a force of up to 3 000 soldiers to be deployed in Mali to help win back the regions under rebel control.

The comments come just days after Sanogo signed an agreement with Ecowas that is supposed to return Mali to constitutional rule, and a new civilian president is due to be sworn in this week.

Sanogo, though, said Monday that he would decide with Ecowas how the country would be run after the 40 days usually set out in the country’s Constitution for a transition of power.

“It was very clear in the framework agreement that after 40 days we would sit down with Ecowas to decide on another team to lead the transition,” Sanogo said.

Under Mali’s Constitution, it is the president of the national assembly who takes over for a maximum period of 40 days until elections can be organised after the presidency becomes vacant.

Deadline void
However, the agreement signed on Friday said that the 40-day limit would be impossible to stick to given the country’s political crisis. Separatist Tuareg rebels now control the northern half of Mali and have declared their independence.

Mali’s ousted President Amadou Toumani Toure officially resigned on Sunday after spending more than more than two weeks in hiding after the presidential palace was attacked by soldiers on on March 21. He had been due to stand down soon anyway because he was reaching the end of his two-term maximum.

The president of Mali’s national assembly, Dioncounda Traore, is due to be sworn in as president on Wednesday, according to his chief of staff, Issa Togo.

“Is it ideal to have to broker a deal where the president steps down and you have to have a interim president until elections? Of course it’s not ideal. But it does mark a very important restoration of civilian rule, without which we didn’t think Mali was going to be able to move forward,” US state department spokesperson Victoria Nuland said on Monday.

Soldiers at the military base that has served as the de facto seat of Mali’s government since the coup have said privately that they were not happy with their leader’s decision to bow to pressure and hand back power to civilians.

And throughout the city, soldiers still control strategic points, including a checkpoint at the airport and several checkpoints outside the state television station. The coup began when the soldiers grabbed control of the state broadcaster, using it to disseminate their message.

Complicating factor
Another complicating factor is that the head of the national assembly, Dioncounda Traore, who is now supposed to become interim leader, is considered a divisive figure. It’s unclear if he has the backing to hold the country together during a tough transition, leading to new elections.

The soldiers who grabbed power claimed they did so because of Toure’s mishandling of a rebellion in the north, which began in January. Toure’s popularity took a nosedive because of his lack of assertiveness in the face of the mounting attacks, which inflicted large casualties on Mali’s ill-equipped army.

After Toure was forced from power, the Tuareg rebels succeeded in taking the three largest towns in the north. Kidal, Gao and Timbuktu all fell last weekend, and on Friday, the same day that the junta declared they were stepping down, the rebels declared their independence.

The loss of the northern half of the country, an area larger than France, has plunged Mali into crisis. The fighters are divided between a secular group and an Islamist faction that wants to impose Sharia law in Mali’s moderate north.

It’s unclear which of the factions has the upper hand, though increasingly it appears that Ansar Dine, the Islamist group, has greater sway, including in Timbuktu, where they control the city, whereas the secular group is relegated to the airport. — Sapa-AP