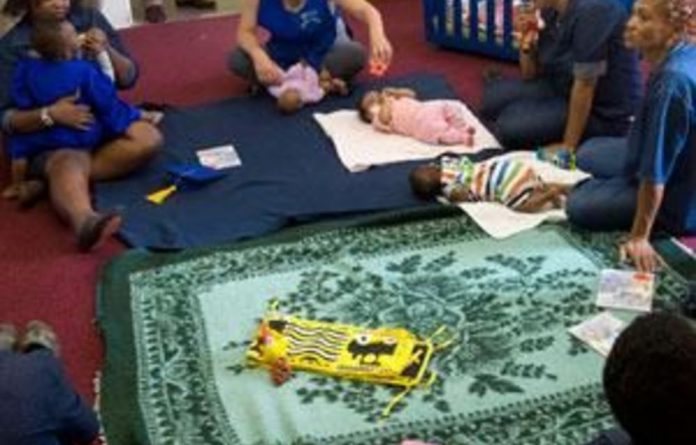 Unathi Jack’s baby son was terrified when she put him down outside for the first time, after months in a cramped South African jail cell cut off from the world.

Now, one-year-old Chibueze confidently roams about in the country’s first dedicated unit to ensure that babies in lock-up are not punished for their mothers’ crimes at the notorious Pollsmoor prison.

“He’s got space now to move up and down,” said Jack, who is serving a five-year sentence for drug possession.

“When he’s outside, he doesn’t want to go inside the house again — he wants to be there outside.”

Sitting in the unit’s cosy crèche filled with toys and learning aids, Jack is one of four mothers who have moved into a quiet part of the prison grounds that is a child-friendly oasis behind razor-wire topped walls.

Unlike the grim women’s prison, where 518 women live in a space meant for 329, the inmates here share a former staff house where the bedroom doors are ordinary wood and the front door stands open during the day.

The women are free to move about, with a yard and a spacious grassy playground, and even get to cook their own food in an unusually liberal jail setting to allow as normal an environment as possible behind bars for a child.

“We are hoping that this will expose them to life that is close to normal but will also contribute in breaking the cycle of crime,” explained Nontsikelelo Jolingana, national chief deputy commissioner for development and care.

Development
The first years of a child’s life are the most important, and babies growing up in cells are shaped by prison life and are often traumatised on leaving.

“They haven’t seen anything other than the four walls that they were kept in. Therefore even the mental development of the child becomes affected,” said Jolingana.

“So we thought that if we opened facilities of this nature, we are giving these children or these babies a chance, because our emphasis is that they have not created a crime.”

“What we saw is that institutionalised babies’ brain development is not on par with babies outside,” she said.

“Everything was up close, they couldn’t develop their far vision properly there and they didn’t get to experience different things inside and outside and even light changes — so basically an all round lack of sensory stimulation.”

‘Big difference’
For mothers serving long sentences, the reprieve is temporary as the children legally have to leave prison for foster care or relatives once they are two years old. The mothers will be sent back to serve out the rest of their term.

In the meanwhile, they relish the gentler setting and seeing their babies react to the stimulation and play.

“There’s a big difference because this is more of a home environment,” said convicted shoplifter Rafieka Rajab (26) whose three-month-old daughter Ameerah spent her first month in the main women’s section.

Apart from missing her family, she admits: “There are times when I feel like I’m not prison, it feels like I’m at home.”

The prison moms used to live in greyish cells with long stretches of lock-down behind metal gates and doors in a three-by-four metre space with a single bed, metal basin and toilet.

They are now paired in airy, wooden-floored rooms with baby cots.

The unit is a far cry from the “chickens in a coop” life of the main jail, said awaiting trial inmate Natalie Stallenberg (30) with weeks-old baby Ezra.

“It’s a very happy environment. It’s actually a good environment for the baby. No one wants this for their child but these guys are doing a good job. The kids are their first priority — nothing else comes ahead of the babies.”

Buddies
The baby-centric setting even means that some of the little ones are introduced to new things not available to many on the outside, such as massages and being bounced on an exercise ball.

“It would have just been me and her, now at least she’s got her little buddies,” Stallenberg added.

The doting prison staff are equally taken with the young charges in the relaxed environment, where moms can move around at night if needed and chortles and squawks fill the air instead of jarring prison noises.

“It’s like almost being at home. I love kids so I’m with them the whole day,” said guard in charge Ronelle Swart.

With some 70 babies currently in South Africa’s prisons and 20 pregnant women in Pollsmoor alone, authorities have opened another unit in Durban and plan two more later this year.

South Africa has one of the world’s highest crime rates, and the move to accommodate the babies has not been without “five star hotel” mumblings — but authorities are adamant that babies are not convicts and say prison rules still apply.

“So you honestly don’t have freedom.” — AFP