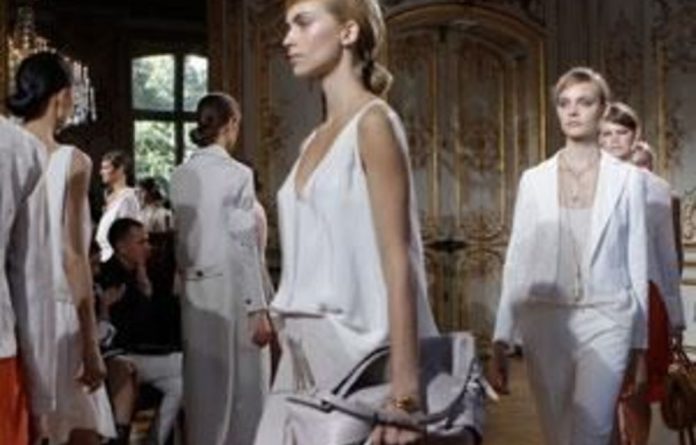 The fish — which was made in Kenya, debuted on the catwalk in Paris and sold in New York — is one of the high-end accessories produced by the new ethically conscious luxury fashion brand, Maiyet.

The name is “inspired by the ancient Egyptian concept of truth and harmony”.

It is tempting to be cynical, derisive. Philanthropy is the new black. But there is an interesting twist in this fishy tale: Maiyet was co-founded by former anti-apartheid activist and human rights lawyer Paul van Zyl, who worked on the Truth and Reconciliation Commission and set up the International Centre for Transitional Justice before making a surprising segue into an industry not exactly known for its political correctness.

The first time he had ever been to a fashion show was when the brand launched in Paris last year.

Now — as any good lawyer should — he is weaving a surprisingly convincing argument for why Maiyet will work where other attempts to save the world through being more attractive have fallen flat.

Ethical fashion and its stepsisters — “organic”, “animal-friendly” and “fair trade” — have been the Cinderellas of the clothing industry for some time now, but the carbon-neutral glass slipper remains elusive.

For many, though, good intentions have proved a slippery slope: actress Emma Watson’s line for ethical label People Tree has apparently been put on hold after her latest range failed to sell; the ethical “African” clothing company, Edun, set up by Ali Hewson, wife of U2 frontman Bono, lost a reported $28-million in its first five years before a 49% minority share was purchased by luxury brand house LVMH. Following the deal, Hewson and Bono appeared in an advertising campaign for Louis Vuitton wearing Edun clothes and carrying a special edition keep-all tog bag that came with a handmade ebony-and-bone charm “crafted by the people of Kenya” (on the plus side, all proceeds from the sale of the bag went to a cotton initiative in Uganda).

It is probably unfair to lump Watson and Hewson in the same boat as, say, Paul McCartney’s annoying ex-wife, but for those of us who live in the developing world, the retail-based model of paying for a better planet on your credit card seems patronising at best and smug at worst.

So why does a lawyer, who, as a student, worked with Bheki Mlangeni (assassinated by Eugene de Kock) and later with victims’ support group Khulumani, where one of the mothers included Catherine Mlangeni, and who, after law school, worked for the Centre for the Study of Violence and Reconciliation, suddenly see value in reviewing sustainable models of wealth creation?

Van Zyl left South Africa when he received a scholarship to go to law school in the United States. When that was finished he set up the International Centre for Transitional Justice and “built it into an international and fairly important non-government organisation” that shared “lessons from South Africa — what we had failed to do [with the truth commission] and where we had succeeded”. By the time he left the organisation, Van Zyl had worked in 30 countries around the world.

Then two notable things happened: he was selected as a young global leader by the World Economic Forum in 2008 and accepted a Skoll award for social entrepreneurship in 2009.

The awards were “for people who used entrepreneurial methods to tackle problems — a world where people used market solutions to tackle the things they cared most passionately about. It occurred to me that it was a model to be looked at.”?

This thought process saw Van Zyl partner with Daniel Lubetzky, a social entrepreneur who, among other things, “discovered a delicious sun-dried tomato product” in Israel while researching legislative means to foster joint Arab-Israeli ventures. The product became the foundation for his business, PeaceWorks Inc.

“We wondered what it would look like to support peace through entrepreneurship,” Van Zyl says — businesses that focused on economic empowerment and poverty alleviation, but in which, for example, Hindus and Muslims worked together, or enterprises that empowered women.

“If we could find those, make those businesses profitable — and high-end — we could achieve a development function and, in a modest way, contribute to stabilisation.”

Van Zyl’s intuition told him that the answer lay in fashion.

“Where is the competitive advantage in developing economies? We thought: look at Kenya, India, Peru — there’s artisanship but it’s underutilised. If we could incorporate what these people did in a brand and offer them design direction, access to markets and finance, we could unlock their value. The idea was to find things that people in developing countries could do well and competitively in a global economy.”

Sowing seeds
Van Zyl was joined by Kristy Caylor (the “fashion brains” in the company, who had worked at GAP). Together, they set out to explore “25 cities in six months, travelling the world looking for artisans that met social and fashion criteria.”

Van Zyl says they settled on luxury as a brand position because “luxury has its roots in artisanship”. Being a luxury brand also allowed for greater value to be driven back down to artisans And, says Van Zyl, “the South African in me liked that the next generation of luxury producers would come from the Third World, not France or Italy”.

Van Zyl believes there are two key differences that distinguish Maiyet. “This is the core of what we do, it’s not a sideline. It’s our sourcing strategy. Secondly, our strategy is geared towards fundamentally overhauling and improving [small businesses], not placing periodic orders — It’s not a quick hit. Not this year Columbia is fashionable, next year it’s Indonesia.

“Everybody we work with is clear about where and why we position the brand as we do. Before we arrive [our suppliers] often make low-value products trapped in the local market. We give training and fair financing, we get up alongside them and make their business more robust.”

Maiyet has a relationship with nonprofit group Nest, which builds capacity in “responsible artisan businesses”. This enables them to find artisans, offer training, provide financing for new tools and upgrade facilities.

“It becomes powerful when they are sustainable and competing on their own terms,” Van Zyl says.

“There are no exclusivity agreements. They can use the facilities to source other brands as well — then market power works.”

It is a model that proved equally attractive to investors, whom Van Zyl describes as a mix of “high-net-worth individuals who want returns and a double bottom line, people from the fashion industry who believe in our model and venture capital funds”.

Under creative director Gabriella Zanzani, who has worked for Donna Karan, Celine, Calvin Klein and Ralph Lauren, sales for Maiyet’s first two collections have been “exceptional”. In the US, upmarket retailer Barneys has extended its exclusivity deal with the brand. Maiyet is also stocked in France, Italy, Japan, Korea and Kuwait.

“We run it exactly like a luxury fashion business. No brand ever succeeds if it doesn’t put the product first,” Van Zyl says. “It’s just that the design process is infused from the beginning with an unusual sourcing strategy.”

Maiyet’s offerings are not limited to developing market products: their ranges include fabric and leather from Italy, embroidery from India, jewellery from Kenya and Colombia and clothes made “in the garment district in New York. We’re based in NoHo. We’re supporting the local economy as well.”

Van Zyl says the company is “actively looking” in South Africa and hopes to announce a venture here soon. “It’s a country made for this model and, for obvious reasons, I think South Africa has gigantic ­opportunities.”