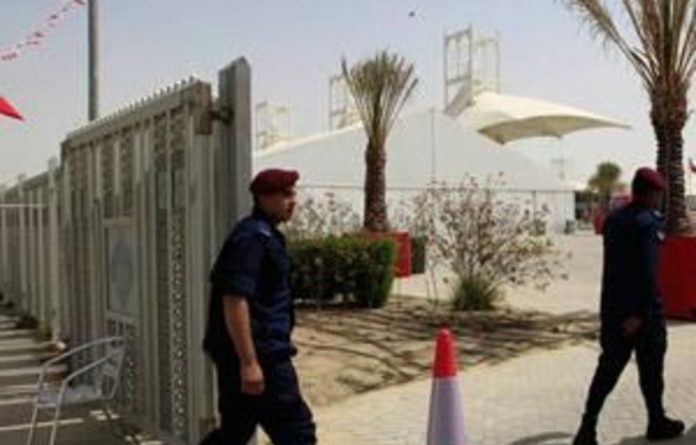 Safety fears grew ahead of this weekend’s Formula One Grand Prix in Bahrain on Thursday after members of the Force India team were caught up in a petrol bomb incident and police fired tear gas and bird shot to disperse anti-government protesters.

Activists seeking to oust Bahrain’s monarchy have threatened “days of rage” to coincide with the race while organisers have ignored calls to call off an event that was cancelled last year due to violent demonstrations during the Arab Spring.

While international sports correspondents are in Bahrain for the race, non-sports reporters from Reuters and some other news organisations have been refused visas to visit the Gulf Island.

Bahrain has been in turmoil since a democracy movement erupted more than a year ago after uprisings in Egypt and Tunisia. Protests were initially crushed with the loss of dozens of lives but youths still clash with riot police and thousands take part in opposition rallies.

For Bahrain’s al-Khalifa family — a Sunni Muslim dynasty ruling a majority Shi’ite population and caught between powerful neighbours Saudi Arabia and Iran — this year’s race has been an opportunity to tell the world that all is back to normal.

But with demonstrations taking place daily, two members of the British-based Force India team asked to go home after the petrol bomb scare.

The Bahrain race circuit said four members of the team travelling between the track and the capital, Manama, drove through “an isolated incident involving a handful of illegal protesters acting violently towards police”.

“During this incident a Molotov cocktail landed in the vicinity of their vehicle,” a statement said.

Sporadic problems
The circuit said it was confident that Bahrain authorities could deal with such sporadic problems and “can confirm that all the usual precautions are being taken around the track to ensure the level of security is maintained”.

Force India, whose drivers are Germany’s Nico Hulkenberg and Britain’s Paul Di Resta, said they had not been a target of the violence and no one the team was hurt.

There were further signs of nervousness among race teams when the MRS team, entered in the supporting Porsche Super Cup series, withdrew its entry from the weekend season-opener, citing safety reasons, without travelling to Bahrain.

“It is the first time in our team history that we have had to cancel a race of the Porsche Super Cup,” team head Karsten Molitor told autosport.com. “In the end we have the responsibility for our employees.”

Overnight, police trying to suppress protests in the Shi’ite village of Sanabis fired tear gas and shotguns to disperse hundreds of demonstrators, a Reuters photographer said.

They were chanting anti-government slogans such as “The people want the fall of the regime!” and “Down, down Hamad!”, referring to the ruler, King Hamad.

Manama has been blanketed with security, with police stationed on the various bridges linking the capital to the rest of the country and the Bahrain International Circuit in Sakhir, where the Grand Prix will take place.

Politics aside, considerable sums of money are stake this weekend. Last year, Bahrain paid a “hosting fee” of $40-million despite cancelling the race. The Bahrain race drew 100 000 visitors to the nation of just 1.3-million and generated $500-million in spending when it was last held two years ago.

Damaging brands
A group of British lawmakers have also warned Formula One sponsors they risk damaging their brands by supporting the Bahrain Grand Prix, arguing the race should have been called off because of political turmoil in the Gulf Arab nation.

Anti-government protesters are planning “days of rage” in the run-up to Sunday’s race, part of a 20-race circuit that generates annual revenues of $2-billion.

A former London police officer, who is advising the Bahrain government, said the safety of teams and spectators could not be guaranteed and an employee of the British-based Force India team returned home on Thursday because of security fears.

Andy Slaughter, a British politician who heads the All Party Parliamentary Group for Democracy in Bahrain, has written to several of the blue chip companies who bankroll the sport.

“The scheduling of the Bahrain Grand Prix will provide a forum and indicate to the rest of the world that it is business as usual — when the reality could not be further from the truth,” he wrote.

“We are most alarmed that you see no grounds to sever your brand and save its reputation from a totalitarian regime,” he added. “We sincerely hope you will rethink your associations with the Bahrain Grand Prix and decide to curtail your sponsorship of the race at Sakhir.”

“If they are major sponsors, they should at least defend their position,” he said, adding that it was now probably too late to organise an effective boycott.

Thomson Reuters, parent company of Reuters news agency, sponsors the Williams Formula One team but Slaughter did not include it on his list of firms that were sent the letter.

A number of the Formula One teams are based in Britain and Briton Bernie Ecclestone (81) runs the sport’s commercial operations.

John Yates, a former assistant commissioner of London’s metropolitan police, said there were certain to be protests in Bahrain over the weekend.

F1 changes are revving up a storm