Wildlife prices too big for genes 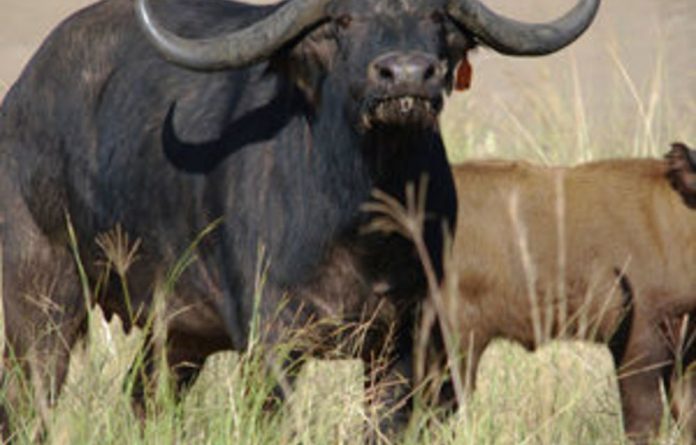 The R20-million paid for a buffalo cow and her heifer calf at a game auction near Swartruggens in North West last Friday has sparked fierce debate in the booming game industry about the sustainability of prices being fetched by rare game.

Rapidly growing industry
According to Johann Vosser of Vleissentraal, the rare game industry is evolving “at breakneck speed”. “The easiest way to understand the change is to compare it to the cattle industry, where you have commercial animals and stud animals and the difference in price and quality is huge,” he said.

“Four years ago, ranch owners stocked wild animals without worrying too much about their genes, but now the drive is towards quality, towards getting your hands on the best genes possible.”

Ramaphosa, who owns Phala Phala ranch near Bela-Bela, where he breeds buffalo, black and white impala and golden wilde­beest, described the growth as “phenomenal”. “We’ve seen 39% to 40% growth in the last three years,” he said.

“It’s a beautiful industry to be in, not only for its investment potential, but because it also serves conservation. It is the aim of every top buffalo breeder to bring back into life bulls the size of the ones that were decimated by colonial hunters in the late 1800s.”

Ramaphosa said the buffalo cow that fetched the record price had a horn spread of 109cm, making it “the biggest of any cow in captivity”. He said the price reflected the value of the animal, but admitted that “not everyone can turn R17.4-million on a single animal” — Du Toit bought the cow from billionaire insurer Douw Steyn last year for R2.6-million at an auction on Steyn’s ranch, Shambala.

Not everyone involved in the industry is convinced that the prices paid at Du Toit’s auction are sustainable.

“In my personal view, these high prices are wonderful advertisements for the industry and its growth, but I don’t think they’ll keep,” said Ernest Janofsky, head of agribusiness at Absa. “I think it’s likely that the volumes of sales will continue to pick up, but that the high prices will fall back, though it’s unlikely that they will slump.”

Gustav Collins, who founded the country’s first wildlife investment company, Wildvest, said no investment company would gauge prospective returns on investment “based on those prices”, but said the average prices for rare game had been growing steadily for 15 years.

“I can see how guys buying these big-ticket animals could potentially get a return on their investment,” Collins said.
“A few years ago breeders were getting R200 000 on auction for a heifer from their buffalo cows, no matter which bull had sired them. Now you put a bull worth R10-million with a renowned bloodline in with the same old cows and suddenly you’re getting R400 000 to R500 000 for your heifers.”

But Collins said he felt the highest prices being paid at auctions reflected “a little artificial stimulation of the market”.

The industry is an extremely intimate one. There are only three breeding ranches large enough to hold auctions either annually or bi-annually — Du Toit’s Game Ranch, Shambala and Thaba Tholo.

The calendar’s other auctions are held by associations of up to six breeders, such as Trophy Breeders, of which South African Breweries chief executive Norman Adami is a member, and Stud Breeders, to which Ramaphosa belongs.

According to Collins, “it does happen that association members buy among each other at auctions partly to stimulate the market and to create the market for the offspring of their animals”.

Vosser said prices could be manipulated in any breeding business, “be it Nguni or Brahman cattle, or Dorper sheep”, but he had not seen any evidence at recent auctions “of prices being chased up”.

Regarding the sustainability of the prices, Du Toit said: “We’re only just beginning to see the ears of the hippo emerging from the water when it comes to the big-buffalo market. I don’t think you’ll ever see these sorts of animals on an auction again because you just can’t get the genes. The door of opportunity when it comes to big buffalo is going to be open for the next 50 to 60 years.”

According to recent Safari Club International surveys, the Cape buffalo was one of three game species hunters would most like to bag if they could afford it. He said it was estimated that there were about 22 000 disease-free buffalo in South Africa, which was well below international demand.

“Things are going well for the wildlife industry, but there will be a plateau and we’ll have to do something about it,” said Dry.

“To this end, Investec has offered to fund a major research project on the economic sustainability of game ranching, with researchers to be appointed by Norman Adami, who acts as WRSA’s marketing director.”

A great deal of attention is being paid to the potential of breeding game for the venison export market, but a great deal of energy is also going into the breeding of game merely for exceptional colouration, which has many industry observers concerned.

“It’s scary how many farmers are breeding the outliers and freaks of the animal kingdom, like the golden gnus and black-nosed whatevers,” said Janofsky. “It’s not well understood and it’s not well controlled, and if it turns out that weak genes are being propagated there’s going to be hell to pay.”

Desire Dalton of the National Zoological Gardens found that no research had been done on the issue. “Breeders aren’t drawing on any science — there has been a study on colour variation in mice and that’s it,” she said.

Members of the game insurance industry are also concerned about it. Speaking on condition of anonymity, one broker said many farmers forewent insurance when transferring regular wildebeest because “they tend to survive the ordeal whereas, when you transport these colour-variant species, animals tend to die, not only in transit but also from stress up to 10 days later”.

The broker said reinsurers were also worried about the viability of high game prices and the consequences for the insurance industry.

“Anyone crazy enough to insure that R20-million cow would only charge a 1% to 1.5% premium to transport it and a further 1.25% for the critical two-week adaptation period in its new home, so you’re talking about a 2.5% premium on R20-million and an excess agreement for only 15%,” said the broker.

“That’s peanuts when you consider that some of the more successful game insurers are only turning [over] R30-million in premium annually. One dead super-buffalo plus a few smaller losses could literally wipe that company out.”

Asked whether he believed the prices paid at Du Toit’s auction would ever be repeated, Ramaphosa said he had met an old rancher who recalled selling a buffalo bull on auction for R8 500 in 1981.

“So you could say we’ll never see R20-million again, but as long as there’s demand in the market it could happen. It could go higher, in fact,” he said.