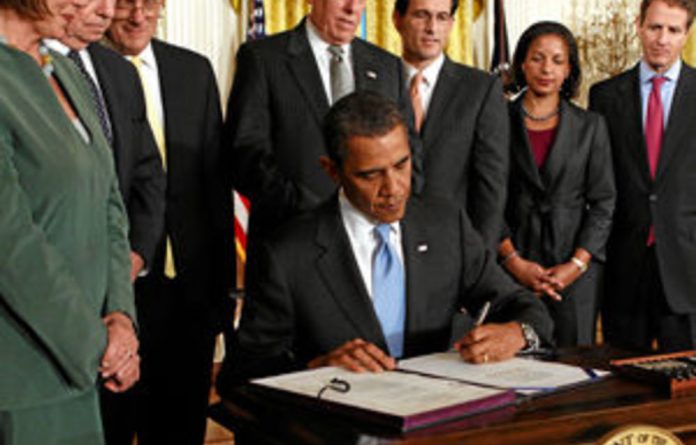 MTN, the R255-billion Johannesburg-listed cellphone giant, is in danger of being whacked with sanctions by the United States for its telecommunication activities in Iran and Syria.

Although MTN is not named in the latest order, which specifically targets companies and individuals aiding the Iranian and Syrian governments, White House officials indicated in a statement that the sanctions list could be expanded to include other countries using technology to crack down on dissent.

The US order adds to MTN’s legal headaches and reputational risks. Africa’s largest mobile operator is being sued in US courts by rival mobile operator Turkcell for $4.2-billion in a claim centred on the bribery of Iranian government officials, a sophisticated weaponry scandal and vote peddling in the United Nations Security Council.

MTN told the Mail & Guardian this week that it had hired international advisers, who were closely scrutinising the order and the possibility of sanctions.

“We have noted President Obama’s statement and continue to monitor the situation,” said Paul Norman, MTN’s chief of human resources and corporate affairs. “MTN retains international legal counsel to advise us on the scope of UN, US, European Union and other relevant sanctions to assist us in remaining compliant with applicable sanctions.”

Standard Bank, with which MTN banks, said it had “no Iran exposure and will continue to monitor payments and comply with any sanctions legislation”.

It has not been established yet whether MTN has any links to these entities or persons.

In Iran, the elite Revolutionary Guard Corps, the intelligence and security ministry, the law enforcement forces and Datak Telecom are on the sanctions list.

In addition to the list, the order targets any person or entity found to have:

A reading of the order by local attorneys suggests that MTN would be a target for sanctions. The company believes, however, it is “carrying out our operations in compliance with applicable sanctions regulations and laws”.

MTN owns 49% of MTN Irancell. It has been under immense pressure to exit the Islamic republic, which is under threat of being bombed by the US because of its nuclear weapons programme. Although MTN is refusing to withdraw from the lucrative market where it services 35-million subscribers, it has been facing a political storm over claims that it helped the Iranian government to spy on local subscribers and assisted the regime in its brutal crackdown on protesters in 2009 and 2010.

The majority 51% shareholding in MTN Irancell is held by a state-linked consortium that is dominated by a subsidiary, owned by the defence ministry, known as Sairan or Iran Electronics Industries. Sairan is already subject to US and EU sanctions that target proliferators of “weapons of mass destruction”. Sairan also holds a share in the Arya Hamrah consortium, which owns and runs MTN Irancell’s data centre that houses the company’s servers and hardware.

In court papers lodged in the US at the end of March, Turkcell alleged that MTN told its Iranian military-linked partners it would allow the defence ministry to eavesdrop on subscribers.

The allegations in the court papers back claims by M&G sources close to MTN’s Iranian business, who described an Orwellian environment in the company’s Tehran headquarters where it allegedly gave military intelligence officials “open” access to subscribers’ details.

Sources claimed that because MTN Irancell and its data centre were part-owned by the Iranian military, subscriber data was shared “on a collegial basis” with the intelligence sector.

Although MTN has denied these claims and they still need to be proved in the US courts, US authorities are putting the screws on MTN and its financial backers by threatening sanctions.

The company previously told the M&G that the equipment it used in Iran was not intended to monitor dissidents “nor is there any evidence that the Iranian government has used the data collected to identify and locate citizens or dissidents”.

It said: “Whatever equipment MTN has acquired for Irancell was for normal business reasons. This is the same software we utilise at other MTN operations. To suggest that we acquired such equipment with the active purpose of enhancing the Iranian government’s capacity to monitor its citizens outside the law is simply outrageous.”

Clayson Monyela, spokesperson for the department of international affairs and cooperation, said the South African government was “not in a position to respond to activities of private companies”. He also refused to comment on any talks between the government, US authorities and the Iranian government on the political situation in Iran.