Downs coach keyed up by team’s return to form 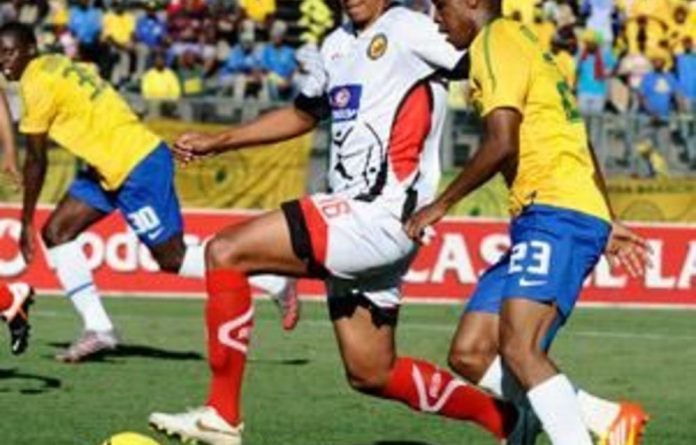 After one of the most comprehensive performances of the season, grabbing a 3-1 win over Santos in Atteridgeville on Sunday, Mamelodi Sundowns’ coach Johan Neeskens was delighted to see his team regaining composure in the race for the Premiership title.

Sundowns picked up only their second win from their last six league matches, climbing back to the top of the table in the final stretch of the season.

“For today it was important that we got the three points, and that we got back on a winning streak again,” Neeskens said after the match.

The Brazilians, equal on 49 points with Orlando Pirates but well ahead on goal difference, went 2-0 up before the break, and showed a hunger for goals by the number of chances they created.

“I think the team played well, especially in the first half,” Neeskens said.

“In the final third, the passes were better than in our other games … We got a little bit of help from Santos with the first goal but then we were the much better team … We scored a beautiful second goal with a terrific cross and a fantastic header.”

Losing control
Neeskens said his side dominated most of the match but then appeared to relax towards the end.

“We controlled the whole first half, and still 15 minutes into the second half, but then when we scored the third goal we didn’t play that well anymore,” he said.

“It was also because maybe the intention to go forward is good, but [when you are] 3-0 up, I think some midfield players play a little bit more back.”

Neeskens believed there was little difference in his side’s performances after two successive defeats, and the only change was his players’ ability to make use of their chances.

“I think we also had the opportunity to win other games but the finishing was not there … Today there were three goals and that is very good and I’m very happy with that.”

Elsewhere on Sunday, Moroka Swallows came from behind to prevail 3-2 over Golden Arrows in Dobsonville, courtesy of a hat-trick by veteran striker Siyabonga Nomvethe.

The victory left the Birds in fourth place on the log, two points behind the pacesetters with three games left.

With the win, the Free State side maintained their slim title aspirations as they settled in fifth place, four points behind the leaders.

Platinum Stars produced an upset as they won away from home with a 2-1 victory over AmaZulu in Durban.

Chiefs were left trailing in sixth position, while SuperSport settled in third place, one point adrift of Pirates and Sundowns.

Wits continued their poor run of form as they were beaten 3-1 by Bloemfontein Celtic at Bidvest Stadium.

Pirates, meanwhile, had dropped points away from home on Friday night in a 1-1 draw against Ajax Cape Town in Cape Town. — Sapa

From church services over WhatsApp to eating with family and listening to chilled music over Instagram, South Africa is going to have a very different long weekend, grounded in sharing and caring
Read more
Advertisting
Continue to the category
Coronavirus