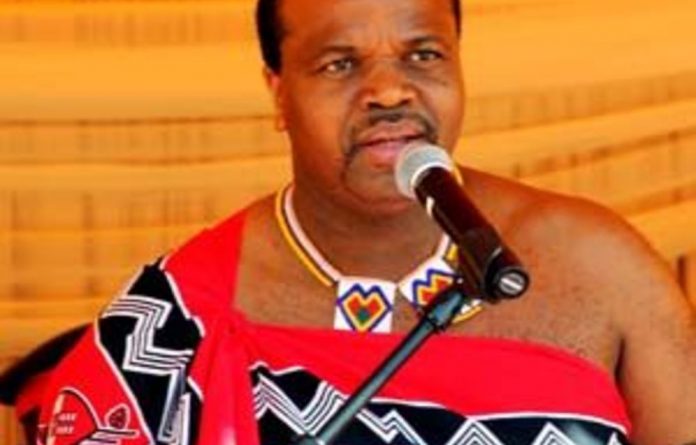 The luxury jet given to Swazi King Mswati III as a “birthday present” last week appears to have been subjected to “aircraft laundering” to conceal its origins, an amaBhungane investigation indicates.

The investigation also strongly suggests that the price of the refitted aircraft is likely to have been much higher than the maximum $2-million estimated by experts last week. One knowledgeable plane-spotter believed it could have cost up to $20-million (R157-million).

Mswati’s jet is an MD-87, a longer-range, more modern and considerably more expensive version of the first-generation MacDonnell Douglas DC-9, which ceased production in the early 1980s.

Last week Swazi Prime Minister Barnabas Dlamini misleadingly announced that a DC-9 had been donated to Mswati by “a development partner”.

In addition, the plane’s interior appears to have undergone a major VIP conversion before delivery to Swaziland. It has been established that in March 2010 it was flown to Goderich Aircraft in Ontario, Canada, which specialises in the custom luxury conversions of midsize business jets.

It is possible that the aircraft had already been sold or pledged to Swaziland when the upgrade took place.

“The most discerning of clients will be delighted with the exquisite detailing,” the website adds.

Aviation expert Linden Birns, managing director of Plane Talking, estimated that equipping the aircraft for presidential use would double its price.

The plane-spotter, who asked not to be named, said: “The VIP interior of a jet is a very costly exercise, as it requires specialist cabinetry work and also additional certification for airworthiness due to the non-standard [that is, non-airline] interior of the jet.”

“Some of these VIP jets have extremely luxurious interiors. It is extremely specialised work, so there are few bespoke interior completion centres worldwide, most of them in the US or Europe.”

He estimated the total cost of the converted aircraft at between $15-million and $20-million.

If Mswati’s jet includes such VIP features — and the king is not renowned for his frugality — it is likely to fuel the controversy sparked by the Swazi government’s announcement that he had received the plane as a 44th birthday present.

The mass of Swazis have sunk more deeply into poverty as a consequence of the fiscal crisis triggered by sharply falling Southern African Customs Union receipts.

The price tag raises further doubts about Swazi premier Dlamini’s claims that it was donated by a private well-wisher. There has been speculation that an Indian firm with iron mining interests in Swaziland, Salgaocar, may have given the plane to the king.

The Mail & Guardian again tried to obtain comment from Salgaocar in Goa, India, this week, but was told that although Mbabane-based Salgaocar Swaziland was “a member of the same family” the Indian-based company is an independent operation.

Chief executive of Salgaocar Swaziland, Sivarama Petla, could not be reached for comment. A company official, Nomcebo Dlamini, was said to be on a trip to China.

Asked about the refurbishment of the jet and whether it was for Mswati, Goderich marketing director Andy Orr said: “Sorry, we don’t comment on that.”

From the jet’s tail number — N871SG — it proved possible to track its delivery flight in April this year from London International Airport to Ontario; to Centralia Airport in the United States; to Gander in far eastern Canada; and then south to Miami, Florida, and Guararapes airport in the Brazilian coastal town of Recife.

It made one further stop in Africa en route to Swaziland, in Windhoek. On April 27 the aircraft’s United States registration was cancelled with a note that it had been “exported to Swaziland”.

Built in 1991 and originally used an airliner by Japan Airlines, the MD-87 was sold in about 2007 and then transferred to two unknown companies, Richard Trudell Inc and Engine and Aircraft Support LLC, to an opaque American company, Aircraft Guaranty Corporation (AGC).

AGC specialises in offering US registration to foreign-owned aircraft, but with ownership details often hidden behind a series of trust accounts, notably in the Cayman Islands.

On its website, it boasts that it provides clients, whether US-based or international, with “ownership entities and structures that offer maximum anonymity of ownership, protection from liability claims, and tax reduction benefits”.

The Houston firm, founded in 1997 by retired US army officer Connie Woods, has been linked as the purported owner of a number of planes identified as allegedly belonging to the CIA and used in “extraordinary renditions” of suspected terrorists. They include the Gulfstream business jet used to transfer Pakistani national Khalid Rashid from South Africa to Pakistan in 2005.

After its conversion by Goderich, which the plane-spotter said was likely to have taken 18 months, depending on the complexity of the refit, the plane was transferred to Wells Fargo Bank trustees — another opaque ownership vehicle.

The MD-87’s earlier history is also tinged by controversy. It appears to have been sold to the Grandmax Group, a company registered in the British Virgin Islands and owned and controlled by Nina Tantiprasongchai.

Online registration records show that in early December 2007, the aircraft was ferried from Tokyo to Hong Kong to Bangkok.

Grandmax appears to have been an intermediary, because the same records show that the aircraft was bought by Aircraft & Engine Support LLC on February 19 2008.