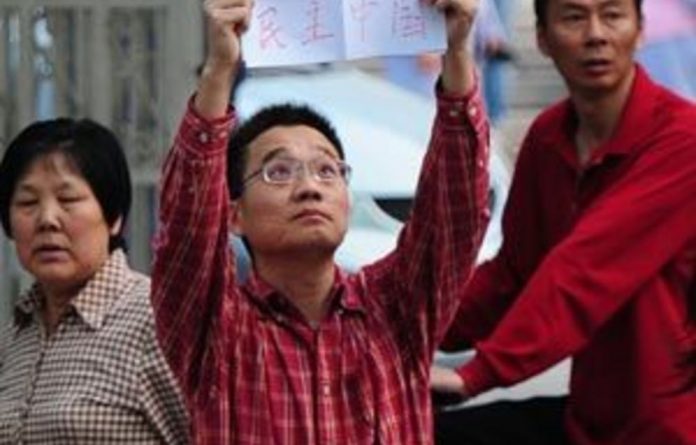 Blind Chinese activist Chen Guangcheng was prepared to spend years in the US embassy if necessary as he weighed his next move, US ambassador Gary Locke said on Thursday.

Chen, one of China’s best-known human rights icons, grabbed world headlines with his dramatic flight from 19 months of house arrest, reaching the US Embassy complex in Beijing last Thursday less than a week before annual meetings between senior Chinese and US leaders.

China’s ruling Communist Party wanted Chen out of the compound and Chen was determined not to leave his homeland, giving US diplomats five days of vexing negotiations looking for a solution that would guarantee Chen’s safety and that of his family.

“He knew the stark choices in front of him,” Locke told reporters of Chen, who at one point in talks with the Americans demanded to speak to Premier Wen Jiabao. “He knew and was very aware that he might have to spend many, many years in the embassy. But he was prepared to do that.

“And he was fully aware of and talked about what might happen to his family if he stayed in the embassy and they stayed in the village in Shandong province.”

Chen began a weekend of lengthy discussions with US officials on the future. He cited South Africa’s Nelson Mandela and Myanmar’s Aung San Suu Kyi in conversations about democracy and activism, US officials said.

US officials shuttled back and forth between Chen and the Chinese government, making repeated attempts to close the gaps between Beijing and one of its most vocal critics.

In the last days before US Secretary of State Hillary Clinton arrived, US officials believed they had a deal within reach.

China would agree to move Chen and his family out of Shandong, where they had complained of persecution by local officials and relocate them to one of seven places in China where Chen would be allowed to fulfil his dream of studying law at university at government expense.

China had also agreed to investigate Chen’s allegations of mistreatment in Shandong and to accord him the rights and privileges of any normal student.

But hours before Clinton’s plane was due to touch down, Chen baulked.

US officials say that late on Tuesday he demanded to speak to premier Wen and suggested officials should bring his wife, Yuan Weijing, and child to reunite with him in Beijing.

Central role
“We went back to the Chinese government and said he needs some assurance,” said Locke, who played a central role in the last-minute diplomacy along with US assistant secretary of state Kurt Campbell and Harold Koh, the state department’s top legal adviser.

“You’re asking him to take a leap of faith and he wants the Chinese government to take a first step.”

China eventually agreed to reunite Chen and his family, who were brought to Beijing by high-speed train. Chen spoke by telephone twice with his wife, who Locke said “implored” him to take the deal, leave the embassy and join her at a nearby hospital where he would receive medical treatment.

“Then we asked him what did he want to do: did he want to leave? Was he ready to leave?” Locke said. “And we waited several minutes and then suddenly he jumped up, very excited, very eager and said ‘Let’s go’ in front of many, many witnesses.”

Bundled into a waiting embassy van and handed a cellphone, Chen spoke with both Clinton and a western reporter before arriving at the hospital where he met his family and began a series of medical checks.

Locke recounted part of one of the phone conversations he overheard between Chen and his wife.

First steps
“I could hear part of the conversation at the embassy in which Mr Chen repeatedly asked are you alone, are there any Chinese government there, have they mistreated you, are you okay, are you safe,” Locke said.

“She was imploring him to come to the hospital, to be reunited with the family and saying that there will always be uncertainties and we will take first steps, we need to keep the struggle going and we have to take it a step at a time.”

US officials had hailed the agreement as marking a new maturity in the US-China dialogue over human rights. But within hours, Chen’s friends and supporters were tweeting their doubts over the deal, and Chen subsequently told foreign reporters he had changed his mind after further discussions with his wife and felt that his safety could no longer be guaranteed in China.

What might have sounded like a simple, clean solution to Chen in the confines of the embassy began to fray once he encountered the security at the hospital, and warnings from friends and supporters that he and his family could still suffer revenge at the hands of Chinese officials.

The turnabout was clearly a shock to US officials, who said they were seeking to clarify Chen’s intentions.

“When we feel that we have a clear view of what his final decision is, we will do what we can to help him achieve that,” one US official said.

“But I’m not going to prejudge here what his final view is going to be, or what we will be able to do to support him, given the fact that he very clearly made one choice yesterday and may have had a change of view today.” — Reuters