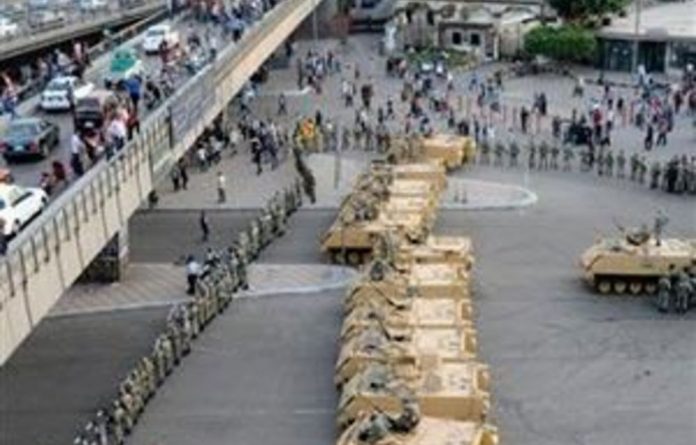 Egypt’s military on Saturday ordered 300 people detained after deadly clashes between troops and anti-army protesters in Cairo and imposed a new curfew, as tensions spiral ahead of a key presidential poll.

The arrests were announced as the country’s ruler Field Marshal Hussein Tantawi attended an unprecedented public funeral for a soldier killed in the clashes.

Military prosecutors said the 300, including nine journalists, “will be held for 15 days pending investigation” into clashes in the Abbassiya district on Friday that left two people including a soldier dead and at least 300 injured.

A security official confirmed the number and said more arrests could follow.

The military also imposed an overnight curfew around the defence ministry for a second successive night, from 9pm on Saturday until 4am on Sunday, the source said.

After hours of questioning overnight, those held were accused of assaulting army officers and soldiers, assembling in a military zone and preventing members of the armed forces from carrying out their work, the source said.

They all denied the charges.

The Supreme Council of the Armed Forces (SCAF) has vowed to hand power to civilian rule when a president is elected.

But protesters believe the army wants to maintain a degree of power even after the elections and fear the polls will rigged in favour of a pro-military candidate.

In Cairo, Tantawi attended the funeral of Samir Anwar Ismail, who died in Friday’s clashes.

Tantawi and his Deputy Sami Enan joined the procession after the funeral prayer for Ismail, a member of a special forces unit, his comrades told Agence France-Presse (AFP).

A horse-drawn carriage bore the coffin behind honour guards carrying wreaths as Tantawi, Enan and other SCAF members followed alongside the family of the dead soldier.

The military had in the past refused to disclose their casualties in clashes with protesters, saying it did not want to affect army morale.

But it made an exception with Ismail because “his death at the hands of protesters represents a clear attack on the army,” an officer told AFP.

Back to square one
Media called for an end to the violence, with state-owned newspapers urging protesters to confine their demonstrations to Tahrir Square — the epicentre of the uprising that toppled Mubarak.

“Tahrir is calling Abbassiya: Go back to the square,” the state-owned Al-Gomhuriya said on its front page.

By Saturday morning, after an overnight curfew ended at 5am, protests had subsided in the defence ministry area, with soldiers and armoured personnel carriers blocking off a road to the ministry.

The health ministry said only the soldier died, while at least 296 people were hurt, including 131 who needed hospital treatment.

Earlier on Friday, military police had charged the protesters, chasing them down side streets near the ministry on foot and in military vehicles, firing birdshot and assault rifles into the air amid chaotic scenes.

The clashes began when some protesters threw rocks at the military police.

To protect the revolution
The unrest comes ahead of the landmark presidential polls amid fears by many Egyptians that the military rulers will renege on a pledge to hand power to civilian rule after the election and that the vote will be rigged.

“We are here to end SCAF rule. We don’t trust them. SCAF is following Mubarak’s example, and we want to protect the revolution,” said Mohammed Badawi from Ismailiya, a member of the Coalition of Revolution Youth.

On Wednesday, unknown attackers also stormed a sit-in near the defence ministry by supporters of Salafist politician Hazem Abu Ismail, after he was disqualified from the presidential race.

The presidential election is scheduled for May 23 and 24 with a run-off for June 16 and 17 if there is no outright winner. — AFP