A Cape Peninsula University of Technology (CPUT) student who wrote on Facebook that black people were “f*****g brain dead monkeys” has been suspended from the institution.

And security company Bidvest Magnum says one of its employees is also facing disciplinary measures after posting derogatory, racist and threatening comments on Twitter during the outcry over racist comments by a magazine model last week.

According to an Independent Online report on Wednesday, Ken Sinclair posted on the social networking site two weeks ago that black people “always skinner in their retarded language”, and in a reply to a Facebook response to his message, “If you aren’t a racist go spend a day at Cape Tech in town. You will wana join the KKK when you are done”.

CPUT spokesperson Thami Nkwanyane was quoted in the report saying Sinclair’s suspension meant he would not be allowed to attend classes, pending the outcome of an internal investigation and a disciplinary hearing.

“The investigation was started by the university’s judicial and legal office. I don’t know how long it will take. As a university, we condemn in the strongest possible terms this kind of behaviour which amounts to hate speech and cannot be tolerated,” he said.

“Freedom of expression is one thing, but hate speech is something else.”

According to a City Press report, former newspaper columnist Pinky Khoabane has also laid a complaint against Sinclair’s post with the Human Rights Commission.

“I’m very distressed about the comment and we shall institute an internal inquiry,” said managing director David Crichton.

Itumeleng Mabeba tweeted that model Jessica Leandra dos Santos “deserved to burn in hell you racist c*nt”, and hoped she was “raped with a broken beer bottle”, the Citizen reported.

Last week Thursday, Leandra told her 2 591 followers: “Just, well took on a an arrogant and disrespectful kaffir inside Spar. Should have punched him, should have [sic].”

QuickTrim SA withdrew their sponsorship of the model, she was stripped of her title as FHM model of the year in 2011, and columnist Mabine Seabe lodged a complaint with the South African Human Rights Commission (SAHRC) against her.

Another South African model, Tshidi Thamana also caused a storm on Twitter when, in response to Jessica Leandra dos Santos’ post, she tweeted that she wished all white people were dead.

“Dear Mr Peter Mokaba … I wish all whites had been killed when you sang ‘Kill the Boer’, then we wouldn’t have to experience @JessicaLeandra’s racism [sic],” she tweeted.

Following widespread condemnation both models apologised, and on Thursday met each other to bury the hatchet in a meeting brokered the DA’s national spokesperson and leader of the party’s Johannesburg caucus Mmusi Maimane.

Sinclair’s profile has been removed from Facebook, following the uproar. See screengrabs of his statements below: 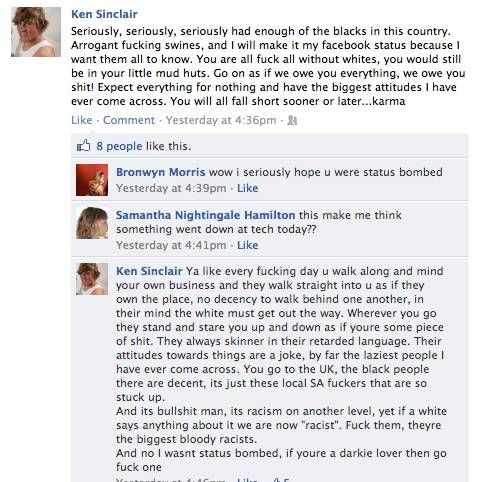 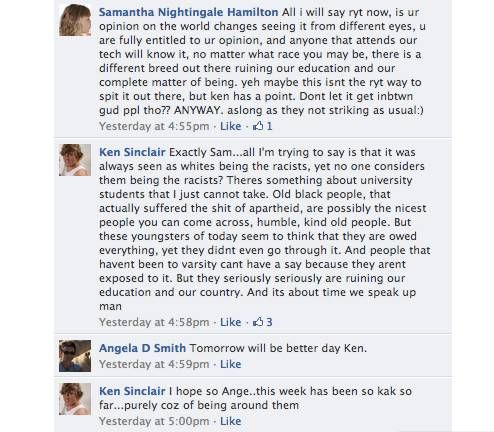 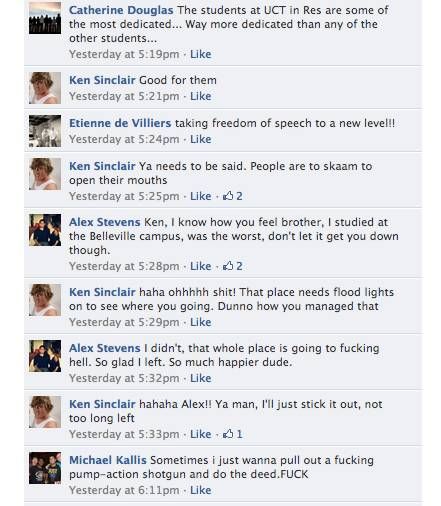 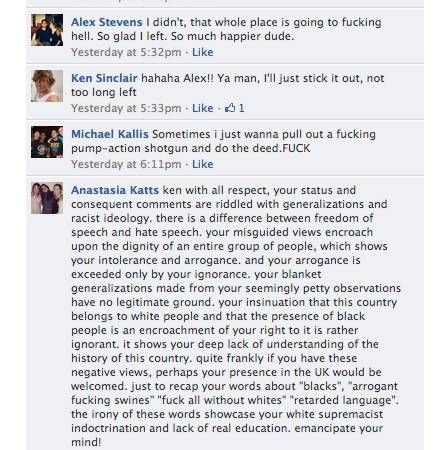 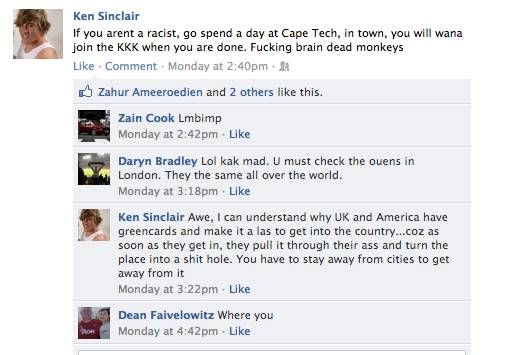