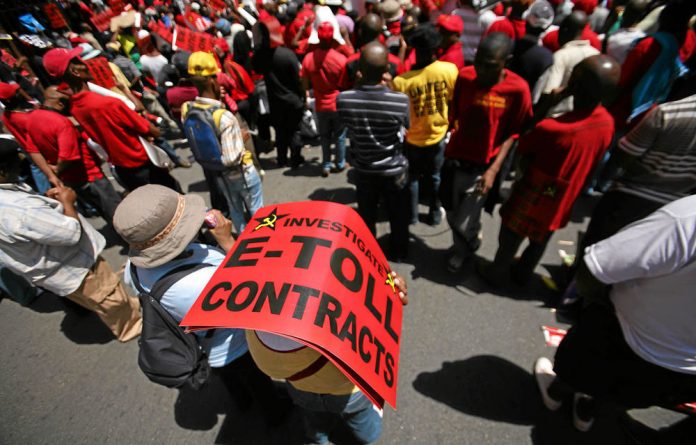 “The impasse over the implementation of electronic tolling on newly built roads, demonstrates continued tension between South Africa’s economic and social priorities versus its aspirations to contain the rise in public debt,” investors service, Moody’s said in a credit opinion.

The ongoing struggle to implement the e-tolling system and repay a R20-billion loan was most recently met with a court interdict. National treasury has consistently argued that any delays could affect the South African National Road Agency Limited’s credit rating and jeopardise the state’s ability to raise sovereign debt.

While South Africa displays a high degree of “financial robustness” for a middle-income country, Moody’s has warned that ratings could be downgraded should government debt (which is fast approaching 50% of gross domestic product) and contingent liabilities rise much further. Of particular concern is “heightened socio-political unrest that is not addressed in a manner consistent with future debt sustainability”.

“While government officials appear determined to lower the budget deficit and stabilise the public debt rations, they rely heavily on optimistic forecasts for both revenue and expenditure. In Moody’s view, there is little additional room for the government to expand its balance sheet at the current A3 rating level. The fiscal space that has been created before the global crisis is now largely gone and an extraordinary effort will be needed in order to regain fiscal flexibility in a less benign global environment …”

Moody’s said it was watching the election of the ANC president later this year as well as a policy-setting conference in June. “This calendar will likely lead to increased political manoeuvring in coming months, and possibly the risk that government leaders will become more amenable to the demands from within the ANC and its alliance partners for more activist economic policy.”

The investor’s service said higher domestic savings and investment rates would support a rating upgrade, as would sustainably stronger growth, restrained debt accumulation and the maintenance of sound economic policies by the current administration and its successors.

The credit opinion is not a rating action or rating affirmation, Moody’s noted.

With little money to respond to Covid-19, the government is looking at other sources of funding
Read more
Coronavirus

Treasury says the credit ratings downgrade “could not have come at a worse time”, as country enters a 21-day Covid-19 lockdown with little money saved up
Read more
Business

The ratings agency is expected to say on Friday whether it will downgrade SA’s credit rating to junk, but it could hold off until the Covid-19 pandemic eases
Read more
Opinion

We must stamp out illicit trade to boost the fiscus

The fiscus loses millions each day because of illicit trade. Sars can’t tackle this problem alone: it is up to all citizens to play their part
Read more
Advertising
Continue to the category
National