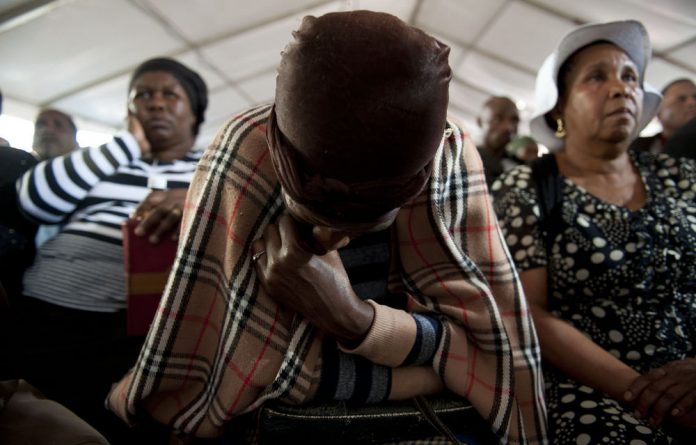 Striking Lonmin workers have settled their differences with mine management and agreed to accept a salary hike that, while not quite what they were demanding, is nevertheless a substantial increase. But in the celebrations – and sighs of relief – that follow, we must not forget the blood price which paid for this peace – a peace that the family of the miners killed in the clashes may never find.

I was at the memorial service that was held for the 34 miners who were killed by the South African police service in the mining town of Marikana in South Africa's platinum belt.

I went out of curiosity, driven by a desire to understand what really happened on August 16. How such a calamity could happen in a constitutional democracy, a free South Africa whose progressive Constitution is the envy of much of the world. How this could happen in a country that has seen miracles worked in situations where others might only succumb to the desire to annihilate each other?

I was with a journalist friend who was there to work. He had been there before, the Friday after the shooting. When we drove into Wonderkop, the shanty settlement where the mineworkers – mostly men – live in tin structures, he slowed the car, and said: "What happened in this area is very bad, please try not to get emotional, it is hectic here."

I thought he was exaggerating.

Driving into the settlement, we were welcomed by a stench that was so pungent that the people who were cleaning up had masks on. They were cleaning up the road, some picking up rubbish from the open field that is just across the shacks where miners live.

Goats, dogs, chickens and birds were competing with one another, scavenging for food in the rotting filth. We drove past a woman who was carrying a bin which she proceeded to dump in the road, with one of the cleaners just a few metres away. Clearly she didn't care. Many of these shacks had no toilets or running water – visible from others was a single tap in front of the shack. This is the informal settlement known to Nguni-speaking people as Enkanini, and Nkaneng to the Sesotho-speakers. Both names mean "by force".

Across the continent and the world, there are many rituals that will be performed when a member of the family dies. Here in South Africa, it is common for a ritual to be performed when someone dies far away from home.  This practice dates back many years. To some, it is called ukulandwa komphefumlo – the fetching of the spirit. The belief is that the spirit of the deceased must be "fetched" from the place where they took their last breath; otherwise it roams around for eternity and never gets to rest.

This is done by going to that exact spot where the person died and speaking to the person as if they were alive. This conversation usually gets conducted using the person's clan name and telling them that "Sizokulanda, siyagoduka ngoku" – we have come to take you home.

This will be continued throughout the duration of the journey back home and if the car stops moving at any point – the deceased has to be notified of what is happening until they reach their final resting place. A tree branch is often used in this communication, but this also varies from family to family, and the person talking will put it over the spot where the deceased took their last breath and relay the message that they are there to take them back home. In my village this branch is known as umphafa. The family will then carefully carry this branch home, where it will be buried with the body.

When my cousin – who was as close to me as a brother – died in a car accident in 2010, the elders went to the exact spot where his body was found and fetched him. Although I will never see my brother again on this earth, I take comfort in knowing that his spirit is resting at home.

Fast forward to Marikana – where migrant workers, many from the Eastern Cape, have left their wives and children the same way their fathers and grandfathers have been doing for decades since the introduction of the homeland laws of 1951 – have been gunned down by those who were mandated to protect them.

The air is heavy with tension but there are no police officers visible. Walking through the field where the shooting happened, I notice that, a week later, there is still a layer of thick, now sun-burnt blood on the ground,  where some of the deceased fell.

There are cameras everywhere, television reporters from around the world. At the bottom of the rock where the miners sat for days, we see four families separately wandering about – with most of the women covering their shoulders in blankets, though it is scorching hot.

There is a family of about eight people from the neighbouring Kingdom of Lesotho – discernible by their signature Sotho blankets – talking and addressing somebody we don't see in front of us. One woman breaks down and starts wailing very loudly, she then falls to the ground in grief. The television cameras all turn to her to capture this.

One lady turns to us to ask for water. She tells us that the deceased is her father, who hailed from the capital, Maseru. She is the sister of the wailing woman.

Overcome with grief and tears running down her cheeks, the woman on the ground says loudly in Sesotho: "Ntate, you came to look for work in order to support us your children, but you met a cruel death here. We have come to fetch you, to take you home to your resting place." We moved away, for fear of interfering in a sacred and painful family ritual.

The families have come to fetch the spirits of their loved ones, who were not just miners, but fathers, sons, brothers and husbands.

Another family a few metres away is sitting in silence, looking dazed. There are three women, an elderly man whose beard and hair is beyond grey, and two young men.

The elderly man has just finished an interview with a television crew. We walk up to them and introduce ourselves. They tell us they are from Mqanduli in the Eastern Cape, about 1 000km away. "I have lost two grandchildren here," he tells us. "I didn't know that people get killed when they demand their rights."

One of the young men tells us that his two brothers were shot in front of him.

He shows us which way he ran and tells us that some miners were crushed by police vehicles.  While he is talking, his entire right cheek is trembling, temples almost popping out of his head. He wears his rage on his sleeve.

Another young man, clutching a bunch of flowers, interrupts: "Grandpa, where should I stand to do the ritual?"

The elderly man instructs him to choose any spot and talk to both his departed brothers. "My child, we have no idea. We don't know where they fell," he says.

At that moment, the family's pain hangs in the silence.

They will never have their loved ones back, or be able to take comfort in knowing that their spirits are resting peacefully at home.

Soon, they will turn back. Perhaps breaking the silence of the journey home to speak to their lost brothers and grandchildren, hoping against hope that their spirits might still hear them.

The only time change has occurred in South Africa is in response to global events such as World War II. The country is once again facing such an event — Covid-19 — and will have to react
Read more
National

Experts disagree on the meaning behind carrying sticks during strike action, a debate that will be aired at the CCMA on Wednesday
Read more
Friday