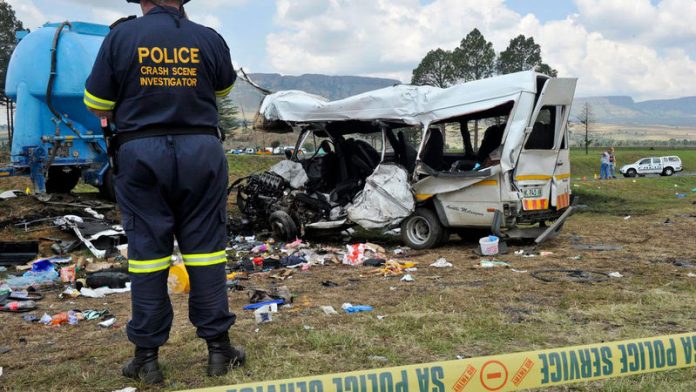 The corporation said it was South Africa's road users who failed the country.

"In general the plan is working … If anyone failed, it's the road users that failed," spokesperson Ashref Ismail said on Wednesday.

"People must learn to behave because only 80% of motorists are complying, others are aggressive and hostile … It is too early to say if the plan is working or not. Let the campaign run its course. We will come up with the necessary comparisons after the campaign."

He was responding to a report in the Star on Wednesday that the road traffic safety management plan was failing.

The newspaper reported that during the December 2006/January 2007 festive period the death toll was 1 261.

In 2008, the transport department announced a plan to halve this figure by 2015.

On Monday, the corporation announced that 1 207 people were killed in 1 006 accidents since the beginning of December.

"Our plans are working but it's not acceptable that between 38 and 50 people die on the roads daily, and during the festive season it is only 42 people a day. This must be dealt with and South Africans will have to pull together."

Tally
On the first day of 2013, 18 people died and 17 were injured in various accidents across the country, according to a tally of accidents in reports by the South African Press Association.

Four people were killed and three others were injured when a delivery van collided with a cyclist in Krugersdorp, on the West Rand.

Five people were killed and three others seriously injured in a drag racing crash in Kagiso on the West Rand.

In Pietermaritzburg, two people died and three others were injured in a head-on collision.

Three people were killed and two others injured on the M13 in Johannesburg when their bakkie overturned.

A 28-year-old woman was critically injured when a car overturned on the N2 between Shaka's Rock and Ballito.

In the Eastern Cape, four people in an ambulance, including two paramedics, were injured when they crashed while transporting a patient.

A five-year-old child suffered serious injuries when the car she was in collided head-on with another car near the Grasmere toll plaza.

Ismail said he could not comment on the exact number of people killed on the roads on January 1.

He added that over 2 000 people were arrested during the festive season. After they appeared in court some would have to re-take both their driver's and learner's licences.

The transport department was not immediately available for comment. – Sapa

Design a railway system to prevent carnage on the N1

The festive season: When reckless abandon may meet reckless driving

Over 900 killed on SA’s roads this December

More than 200 killed on SA roads over Easter