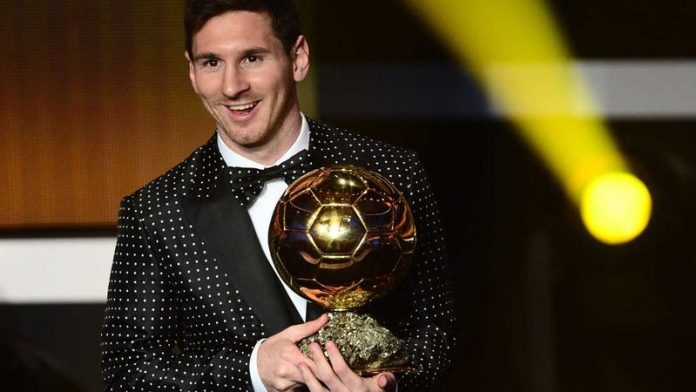 Messi was handed the Fifa Ballon D'Or award after a typically cheesy ceremony which featured a performance from a giant dancing armadillo named Fuleco, the mascot for the 2014 World Cup in Brazil.

For the third time in a row since Fifa's Player of the Year of the year merged with France Football's Ballon d'Or, the podium was shared by three players based in La Liga. Spain's Vicente del Bosque won the coach of the year award in a poll where Fifa bafflingly failed to look beyond coaches based in Europe.

Herve Renard, who led Zambia to a poignant and highly unlikely win at the African Nations Cup one year ago, and Tite, coach of South American and world club champions Corinthians, both failed to make the original shortlist of 10 coaches.

Del Bosque's two rivals on the night were former Barcelona coach Pep Guardiola, who is currently on a one-year sabbatical and won only the King's Cup last season, and Real Madrid's Jose Mourinho, who won La Liga.

Brazil's participation was restricted to the armadillo, a capoeira dance group that performed early in the ceremony and cameo appearances from former forward Ronaldo and national team coach Luiz Felipe Scolari, who presented two awards.

The five-times world champions have not had a player in the final three since Kaka won the award in 2007, an unprecedentedly bad run for a country which once produced industrial quantities of world class footballers.

Their only representative on the 23-man shortlist this time was Santos striker Neymar, who finished 13th with 0.61% of the vote.

Poor year
In terms of major titles, 2012 was relatively poor for Messi as Barcelona won only the King's Cup.

They lost out to Real Madrid in La Liga and their Champions League campaign ended with a semi-final defeat to Chelsea. Yet, there was no arguing with Messi's record-breaking total of 91 goals in the calendar year while he also overcame his major perceived weakness, his form when playing for his country.

Messi scored 12 goals for Argentina, including his first two hat-tricks, as he put them well on course for a place at the 2014 World Cup in Brazil. "We have changed this year, we haven't lost any games and, very importantly, we have played very well, something which before we weren't doing," said Messi in a news conference before the ceremony.

"I'm happy about the way things are going. We have to keep improving as a team and qualify first, but there's still a long way to go." Messi won 41.6% of the votes in the poll conducted among the coaches and captains of the world's national teams, while Ronaldo managed 23.68% and Iniesta 10.91.

Xavi was fourth and Colombia's Radamel Falcao fifth while Africa's only representative amoung on the 23-player shortlist was Didier Drogba, who was eighth.

The ceremony, conducted by former Dutch international Ruud Gullit and television presenter Kay Murray, began with a speech from Fifa president Sepp Blatter, who made a brief reference to last week's racism incident in Italy.

"If a player walks off the pitch because he has been racially abused, just as AC Milan player Kevin-Prince Boateng did, it is a strong and courageous signal, a way of saying it has gone too far," he said. "It is praiseworthy but it cannot be the solution in the long term," added Blatter over the incident in which Boateng walked off the field after hearing racist abuse from the crowd and Milan followed suit.

The team of the year was entirely based on La Liga players, featuring Iker Casillas in goal, Dani Alves, Gerard Pique, Sergio Ramos and Marcelo, in defence, Xabi Alonsi, Xavi and Andres Iniesta in midfield and Lionel Messi, Radamel Falcao and Cristiano Ronaldo in attack.

In a rare venture away from Spain, the best goal of the year was given to Slovakian forward Miroslav Stoch for his effort for Fenerbahce against Genclerbirligi in a Turkish Super League match.

Former West Germany captain and coach Franz Beckenbauer was given the presidential award for outstanding service to football. Abby Wambach became the first American since 2002 to win the women's Player of the Year award and Sweden's Pia Sundhage, who led the United States to the gold medal at the Olympic Games, was named coach of the year for women's football.

Uzbekistan won the fair play award for their overall record in Asian competitions. They beat the Guatemalan Football Federation who had been widely praised for handing life bans last year to three seasoned internationals found guilty of match-fixing. – Reuters