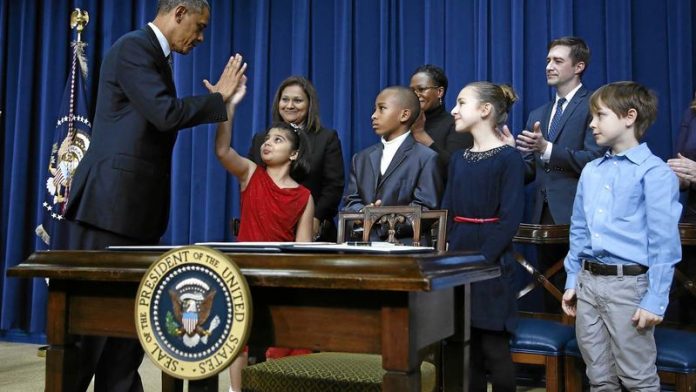 He announced a sweeping set of proposals to ban automatic weapons, limit magazines to 10 bullets, introduce universal background checks for all firearm buyers and increase the scrutiny of mental health patients.

At a carefully stage-managed White House press conference a month after the Sandy Hook school massacre, Obama said the US has waited too long to tackle gun violence and that it is now time to act.

Flanked by a group of schoolchildren, he said: "This is our first task as a society: keeping our children safe. This is how we will be judged, and their voices should compel us to change."

Obama said his reforms are intended not just to reduce killing sprees but also the everyday gun violence seen across the US. In the month since the Newtown shootings, 900 Americans have been killed by guns, he said.

The National Rifle Association (NRA) immediately vowed all-out opposition to his proposals, warning that it is preparing for "the fight of the century". Wayne LaPierre, the NRA executive vice-president, said: "I warned you this day was coming and now it's here. It's not about protecting your children. It's not about stopping crime. It's about banning your guns … period."

Obama, having abandoned any faint hopes of winning over the NRA after Newtown, has opted to confront it head on, calculating that the emotion over the deaths of 20 children and six teachers has changed the national mood in favour of tougher controls.

Elitist hypocrite
The White House described as "repugnant" and "cowardly" an NRA advert that brought Obama's two daughters into the debate, claiming the president is an "elitist hypocrite" because his children have personal protection.

The president faces an enormous struggle to get his more ambitious proposals through Congress because of almost certain opposition from Republicans, who control the House, and some Democrats, especially in the Senate.

On stage with him were four children who wrote to him after the shooting. Also in the audience was a survivor of the Virginia Tech shooting and the parents of a child killed in Newtown. Obama spoke about that child, Grace McDonnell, describing her favourite colour and ambitions, and reflected not only on her short life but also on the potential that has been lost. The president said he has a painting by Grace, given to him by her parents, on the wall of his private office.

House Republicans said they will consider any legislation that came from the Senate, where all Bills start and where the Democrats have a majority. The Senate will start looking at measures in a fortnight.

Obama acknowledged it will not be easy getting legislation through, but said: "If there is even one thing we can do to reduce this violence, if even one life can be saved, we have an obligation to try."

Too many loopholes
The most high-profile reform Obama proposed to put to Congress is a tougher version of the 1994 law introduced by Bill Clinton that banned automatic and semi-automatic weapons, which was ­criticised by the gun-control lobby as having too many loopholes.

Legislation will also be needed to reduce the number of bullets in magazines to 10, which gun-control activists argue could limit the number of casualties in shooting sprees.

Just as far-reaching would be the introduction of universal background checks for all gun sales. Although federally licensed gun sellers are required to carry out checks on buyers, gun shows and online sales are exempt.

Legislation would end this loophole, which allows, according to Obama, 40% of all gun sales to take place without a background check.

Residents of Newtown welcomed Obama's proposals. Richard Marotto (40) described them as "fantastic". Marotto's daughter Julia, a first-grader at Sandy Hook Elementary, lost many of her classmates in the December 14 tragedy. – © Guardian News & Media 2013