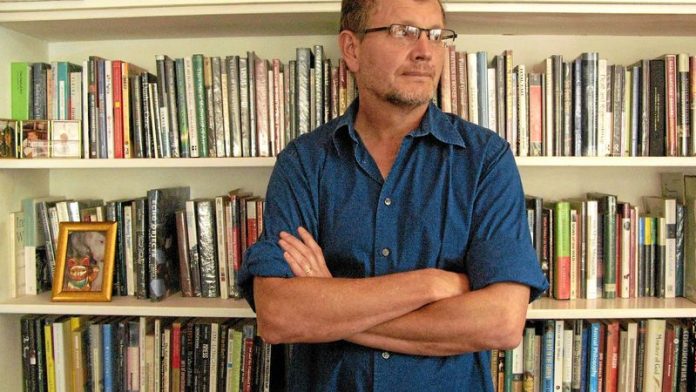 In his top floor office at the Michaelis School of Fine Art, on a rectangular desk adjacent to a locked bookshelf filled with his cherished Samuel Beckett books, Colin Richards — the prematurely deceased artist, educator, scholar and humanist — kept a stuffed parrot. It was a gift from Pippa Skotnes, a colleague and fellow professor in the University of Cape Town’s art faculty, which he joined in 2010 after 24 years at the University of the Witwatersrand.

“When he first came into my office, he saw my African grey parrot and was so transported by it I had to give it to him,” Skotnes said. “He made several drawings of it.”

The lifeless parrot and the enormous personal library he kept on campus offer a way (and there are many others) of knowing Richards, a man committed to seeing and knowing. The two concepts are not mutually exclusive. His conceptually applied practice, much like his patiently achieved scholarship, aimed to reconcile embodied action with dispassionate appraisal.

Take the parrot. In 2009, Richards held a solo exhibition with dealer Alet Vorster, whose Gallery AOP in Johannesburg has long shown his work. Titled Parrot Parrot, the exhibition featured a trio of works serially describing the bird that best epitomised his interest in “skill and fakery”. One was a mimetic representation of an African grey, done in watercolour; the other two, both pen-and-ink drawings, described its shape and silhouette.

“Colin was deeply preoccupied with parrots and tortoises, with the idea of an original and the painstakingness, as he put it, of making a copy,” said Skotnes of his recent preoccupations as an artist. Previously, he had repeatedly drawn the Veil of Veronica, another meditation on originality based on the legend of the shroud bearing a likeness of the face of Jesus.

“In his work, he created complexity through a small prism, an illusion of something through a deep commitment to labour,” Skotnes said.

Initially employed as a medical illustrator, completing his formal art training while working, Richards was encouraged to show his work by his wife and lifelong colleague, painter Penny Siopis.

“Always respectful of the other’s teaching, activism and intellectual pursuits, the two remained each other’s toughest and most reliable critic,” Sue Williamson said.

Richards used his drawing pens throughout his career. “Illustration is a hinge between the linguistic and the visual, and it can turn many ways,” he told Kathryn Smith, a kind of protégée of his, and there are many.

“It is very difficult to overestimate his contributions as a teacher, an artist, a scholar and colleague, and a mentor to so many over the years,” said Olu Oguibe, the Nigerian-born United States-based artist and historian who contributed to the early reception of contemporary African art internationally.

Richards’s contributions to the influential journal Third Text, of which he was also a member of the advisory board, included an important essay exploring the relationship between “symbol and substance, the imagined and the material”.

He used the creative work of unheralded local artists — Siopis included — to argue his point about the need to “uncover our history and recover our traditions … in memory of those who cannot return”.

“Back in the early 1990s, when we were still struggling to get art history as a discipline to acknowledge African contemporary art, Colin was one of the few anywhere who brought a dedicated and strictly scholarly approach to that effort through his own pioneering work,” said Oguibe.

Although very private, Richards did not ring-fence his scholarship. Indeed, his catholic reading habits amplified his gifts as a teacher and writer. Corina van der Spoel, proprietor of Die Boekehuis, the defunct Melville bookshop whose closure Richards protested in a public petition, remembers him as a “consummate bibliophile”.

“I loved the fact that the more obscure the title, the more specialist the field and intended readership of the book, the better the chances were that it would fascinate him,” she said. Fittingly, the shop included an artwork of his that showed a shelved collection of books on animals bought over the years from the shop.

Like much of his work, it was guided by a moral imperative: in this instance, to see and know the animal and, by so doing, acknowledge “the care, the love, the violence, the death-dealing duplicities and desires that run through our human-animal entanglements”. He wrote this in 2007, five years before a slip in his bathroom culminated in his death.

Colin Richards, born 1954, died December 26 2012, is survived by his wife Penny Siopis, daughter Khadija and son Alexander. There will be a memorial at Hiddingh Hall, Michaelis, at 4 pm on Friday February 1