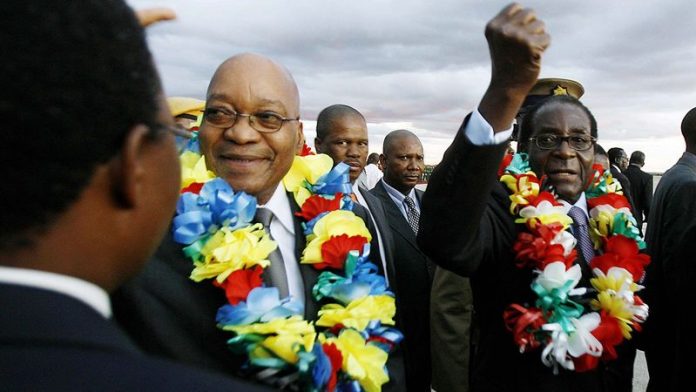 Unlike his predecessor Thabo Mbeki, Zuma is seen by the Movement for Democratic Change (MDC) parties, the pro-democracy civil society groups and private media as less sympathetic towards  the Zimbabwean president.

"Mugabe stuck with Zuma" ran a banner headline after the ANC conference in Mangaung last month.

Mbeki negotiated the 2008 power-sharing agreement that left Mugabe's power largely intact and MDC leader Morgan Tsvangirai in a poorly defined and weaker position as prime minister. It was considered a betrayal of the cause for democracy.

For his part, Mugabe once described Cyril Ramaphosa, the new deputy president of the ANC, as "a white man in a black man's skin". Therefore, his return to top-level politics is regarded by the opposition as a bonus.

Zuma's victory allows him to remain South Africa president until the 2014 elections when he will seek a second and final term, which is all but guaranteed, given his party's electoral dominance. Crucially, this means he retains his role as the Southern African regional facilitator of political reforms in Zimbabwe.

The reforms are part of a power-sharing agreement the Southern African Development Community (SADC) brokered in 2008 to resolve the crisis that followed the controversial presidential election earlier that year.

Zuma recently denied having any differences with Mugabe, claiming that they "were freedom fighters together". But some members of Mugabe's Zanu-PF party would have welcomed a Zuma defeat in Mangaung.

Moreover, Zuma is accused by some in Zanu-PF of supporting the re-formation of the party's oldest rival, the Zimbabwe African Peoples' Union (Zapu) under the leadership of Dumiso Dabengwa. Zapu, a close ally of the ANC during South Africa's liberation struggle years, will challenge Zanu-PF in the upcoming elections.

Conversely, the Zuma camp alleges that Zanu-PF secretly aided former ANC Youth League leader Julius Malema's various attempts to undermine Zuma's presidency and his campaigns for the nationalisation of the mines and the takeover of white-owned commercial land in South Africa.

These suspicions and allegations underline the testy nature of the Zuma-Mugabe relationship, despite the recent public denials by Zuma and Zanu-PF's national chairperson, Simon Khaya Moyo.

Mugabe's enemies are hoping for external help to ensure an effective transfer of power in the elections. The MDC trade minister, Priscilla Misihairabwi-Mushonga, went so far as to claim that SADC member states would intervene in Zimbabwe if the vote was not free and fair.

"I have no doubt that, if things went to the worst in Zimbabwe, there would be a military intervention … The mood I see in SADC summits is that they will not allow a situation where Zimbabwe will go through an election that is not free and fair again.

"And they will be right in order to do that intervention, which is why some of us believe that there is still hope," Misihairabwi-Mushonga said.

But, realistically, the likelihood of a SADC-led military invasion into  Zimbabwe is low. Even if there was the political will, member states do not have the military or financial capacity.

Zuma has insisted on the implementation of political reforms before new elections are held, with the adoption of a new constitution being the benchmark, much to the chagrin of Zanu-PF. However, elections are constitutionally due in June and Zuma is unable to speed up the pace of reform.

Zanu-PF is counting down while the clock ticks, because an election under the old rules would suit Mugabe's party. The fear in the pro-democracy camp is that reforms guaranteeing a level playing field will not have been completed by June. – Guardian News & Media 2013

Blessing-Miles Tendi is the author of Making History in Mugabe's Zimbabwe: Politics, Intellectuals and the Media, and a lecturer in politics in the University of Oxford's department of international development.