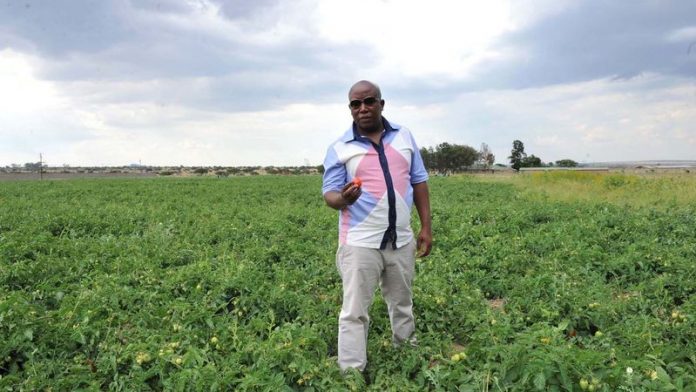 We were in the lap of luxury. Hushed waiters in silk vests padded around us, offering passion-fruit lemonade and rack of lamb; the noise of a rock fountain tinkled sweetly in through the open window; white table linens caressed our fingers; orchids wafted their warm vanilla-y scent from blown-glass decanters on every table. But Julius Malema was unhappy.

He has developed the disease familiar to every Karoo boertjie (farmer): the longing for die ou plaas (the old farm), unquenchable even in the loveliest of other places.

"Jo'burg is not my favourite place," he told me, toying forlornly with his white BlackBerry, which did not ring. "I like it on the farm. It's very nice. It's cool and quiet." He brightened. "On the farm, we sit under the tree there, and there is nobody to judge you. Fighting with workers the whole day: 'Hey! Do this!'"

He chuckled, brighter yet. "And they'll laugh at you sometimes: 'He's going like God!' We enjoy that. I love walking up there by the cabbages and tomatoes and seeing them growing. That, to me, is an excitement."

I had arranged to meet Malema at a Sandton boutique hotel, the Marion on Nicol, to talk economic freedom in our lifetimes. We only started talking about farming after Moeletsi Mbeki stopped by our table.

"I was so proud of your vegetable garden!" he said. He said he had seen it in the Sunday papers.

Incisive
"My mother used to make us grow cabbage and carrots … So I thought: 'This guy knows something!'" Malema beamed.

During the past year of strikes, Malema's critique of the ANC's failure to deliver on its implicit promise to put the poor first has become refined, intelligent, even incisive. "You fight for the increase of salaries, but then in the board meetings you are told that it is going to eat up your dividends. You can't be two things at the same time. Once you make a lot of money, you use your money to think."

But the barbs were delivered without relish. Only when we began to speak of farming did he channel the passion he once poured into renditions of Dubula iBhunu (Shoot the Boer). "I developed an absolute love for it," he said. "The farm labourers are ordinary people. There are no egos there, nothing."

Malema began planting cabbages and tomatoes – which he claimed he sells on the side of the road – in December, on a plot between Polokwane and Dendron. He wishes to expand into Venda. He has become something of an expert on Limpopo's terroir.

"In Polokwane you can only grow tomatoes in summer. But in Venda, because of the weather, you can do it both summer and winter."

I initially doubted whether Malema really farmed, because so many businesspeople-farmers visit their plots once a month at best and delegate. But he has already picked up two of the devoted farmer's dead giveaways: a religious relationship with the skies and a tendency to speak of his plants as though they are people. "There hasn't been rain!" he lamented. Just after New Year's, he sat on his farm for two weeks waiting, waiting for rain, watching fat, nourishing rain clouds douse Polokwane and wringing his hands that they never seemed to move a bit east to bless his farm. "And you know, it pains you. You're praying!"

Regenerative power
The countryside has long been believed to hold regenerative power for those wearied or corrupted by the city. But Malema seems torn between the rural life and his previous lives as an ANC bigwig and a city-slicker businessman.

When I asked him what his ambitions for future leadership were, he broke into a belly laugh and answered: "My ambition is be a member of the ANC. Then you can have other ambitions" – despite his contention a half-hour earlier that certain top party leaders had "sold their souls" to "white monopoly capital". He said his enigmatic business ventures would also continue.

"A man has to eat," he said, a little incongruously for someone saying why he cannot devote his time to working on a farm. "When they say life goes on after being expelled from the ANC, you have to hustle. You can't hustle on the farm."

Fully embracing the business side of farming may elude him, too, because of his politics. We spoke of a friend of mine, a powerful established farmer not far from Malema in Limpopo, who could instantly flesh out his expertise and connect him with commercial markets. "You must send me the contacts of this guy who knows everybody," he said. Then he paused. "Is he a black guy?"

Last week, the South African Revenue Service (Sars) took steps to resolve Malema's inner conflict by announcing it would try to attach his farm to offset his R16-million tax bill. It was a bitter irony for a man who once called for the mass expropriation of white farms – to be expropriated himself.

Mythic narrative
Indeed, in the course of about four weeks, Malema lived through the entire 300-year mythic narrative arc of the South African boer: Retreat from familiar homeland owing to political persecution. Set up a farm. Fall in love with the soil. Then face the threat of being "reformed" right off your property.

Reaching him on the phone after our meeting at the Marion, I asked whether he had any new sympathy for the South African boers, given his experience.

"No," he said bluntly. But he sounded just as stubborn as any khaki-clad bittereinder (Boer guerilla fighters who stubbornly resisted the British soldiers during the South African War) as he discussed his options in the wake of the Sars announcement.

"Farming will never be stopped. Even if I must continue with another farm. Farming is forever."