State of emergency declared after violent protests in Egypt 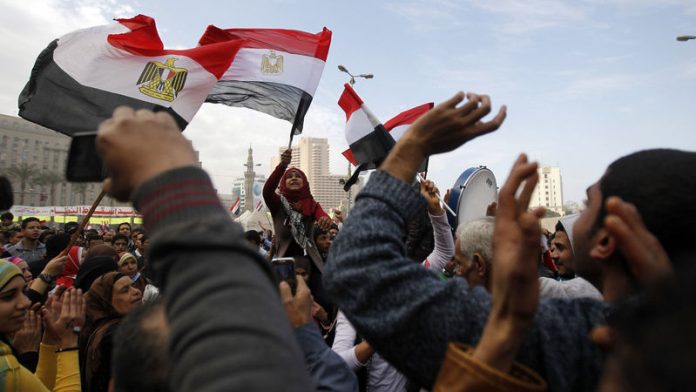 Egypt's President Mohamed Morsi has declared a month-long state of emergency in three cities along the Suez Canal where dozens of people have been killed over the past four days in protests that his allies say are designed to overthrow him.

Seven people were shot dead and hundreds were injured in Port Said on Sunday during the funerals of 33 people killed there when locals angered by a court decision went on the rampage as anti-government protests spread around the country.

A total of 49 people have been killed since Thursday and Morsi's opponents, who accuse his Islamist Muslim Brotherhood of betraying the revolution that ousted long-time ruler Hosni Mubarak, have called for more demonstrations on Monday.

"Down, down Morsi, down, down the regime that killed and tortured us!" people in Port Said chanted as the coffins of those killed on Saturday were carried through the streets.

Morsi, who was elected in June, is trying to fix a beleaguered economy and cool tempers before a parliamentary poll in the next few months which is supposed to cement Egypt's transition to democracy. Repeated eruptions of violence have weighed heavily on the Egyptian pound.

In a televised address, he said a nightly curfew would be introduced in Port Said, Ismailia and Suez, starting on Monday.

Several hundred people protested in Ismailia, Suez and Port Said after the announcement, in which Morsi also called for a dialogue with top politicians. Activists in the three cities vowed to defy the curfew in protest at the decision.

"The protection of the nation is the responsibility of everyone. We will confront any threat to its security with force and firmness within the remit of the law," he said, offering condolences to families of the victims.

In Cairo the newly appointed Interior Minister Mohamed Ibrahim was ejected from the funeral of one of the police officers who died during Saturday's clashes in Port Said, according to witnesses and police sources.

A police officer at the funeral said many of his colleagues blame the interior minister for the deaths of at least two police officers during Saturday's clashes as he did not allow the police there to carry weapons and were only given teargas bombs.

Security measures
The violence has exposed a deep rift in the nation. Liberals and other opponents accuse Morsi of failing to deliver on economic promises and say he has not lived up to pledges to represent all Egyptians. His backers say the opposition is seeking to topple Egypt's first freely elected leader.

Distancing itself from the latest flare-ups, the opposition National Salvation Front said Morsi should have acted far sooner to impose extra security measures that would end the violence.

"Of course we feel the president is missing the real problem on the ground, which is his own policies," spokesperson Khaled Dawoud said. "His call to implement emergency law was an expected move given what is going on, namely thuggery and criminal actions."

The Front, formed late last year when Morsi provoked protests and violence by expanding his powers and driving through the Constitution, threatened to boycott the parliamentary poll and call for more protests if its demands were not met, including one for an early presidential vote

Morsi had invited 11 political parties, including Islamist, liberal and leftist groups, along with four top politicians to a meeting on Monday at 6pm (4pm GMT) to work out a basis for a fruitful dialogue that would resolve the political crisis, according to a statement from his office.

The Front said it would meet earlier on Monday to discuss the invitation.

But some of the Front's top leaders had already announced their position. Hamdeen Sabahy, a leftist politician and former presidential candidate who was one of the four invited by Morsi, said he would not attend Monday's meeting "unless the bloodshed stops and the people's demands are met".

'Security solutions'
Sabahy's Popular Current movement said in a statement the protests are due to economic and political problems that need to be addressed by policies and not through "security solutions".

Gunshots had killed many of the 33 who died on Saturday when residents rioted after a court sentenced 21 people, mostly from the Mediterranean port, to death for their role in deadly soccer violence at a stadium there last year.

A military source said many people in Port Said, which lies next to the increasingly lawless Sinai Peninsula, possess guns because they do not trust the authorities to protect them. But it was not clear who was behind the deaths and injuries.

In Cairo, police fired teargas at dozens at protesters throwing stones and petrol bombs in a fourth day of clashes over what demonstrators there and in other cities say is a power grab by Islamists two years after Mubarak was overthrown.

In Ismailia city, which lies on the Suez Canal between the cities of Suez and Port Said, police also fired teargas at protesters attacking a police station with petrol bombs and stones, according to witnesses and a security source there.

'Knee-jerk reaction'
Most of the deaths since Thursday were in Port Said and Suez, both cities where the army has now been deployed.

"It is a classic knee-jerk reaction to think the emergency law will help bring security," she said. "It gives so much discretion to the ministry of interior that it ends up causing more abuse which in turn causes more anger."

The opposition Popular Current and other groups have called for more protests on Monday to mark what was one of the bloodiest days of the 2011 uprising.

Anti-Morsi protesters who have been camped out in Tahrir Square for weeks also demonstrated against the president's move to impose a state of emergency, reviving memories of Mubarak's era when emergency codes were in place for three decades and used to crush dissent and detain people without charge.

'Ruling for their own interests'
Protesters say Morsi has betrayed the revolution's aims.

"None of the revolution's goals have been realised," said Mohamed Sami, a protester in Cairo's Tahrir Square, the cauldron of the uprising that erupted on January 25 2011 and toppled Mubarak 18 days later.

"Prices are going up. The blood of Egyptians is being spilt in the streets because of neglect and corruption and because the Muslim Brotherhood is ruling Egypt for their own interests."

Clashes also erupted in other streets near the square. The US and British embassies, both close to Tahrir, said they were closed for public business on Sunday, normally a working day.

The army, Egypt's interim ruler until Morsi's election, was sent back onto the streets to restore order in Port Said and Suez, which both lie on the Suez canal. In Suez, at least eight people were killed in clashes with police.

Many ordinary Egyptians are frustrated by the violence that have hurt the economy and their livelihoods.

"They are not revolutionaries protesting," said taxi driver Kamal Hassan, (30) referring to those gathered in Tahrir. "They are thugs destroying the country." – Reuters