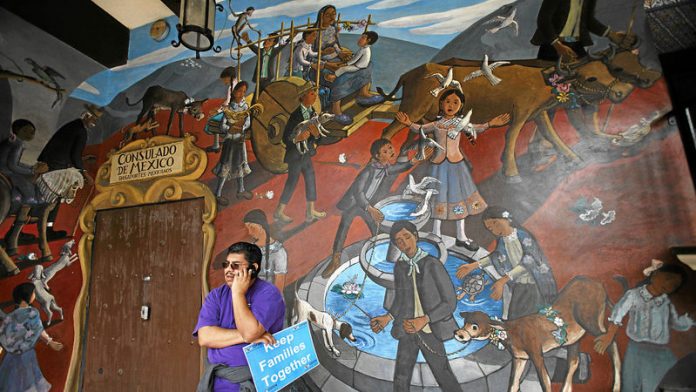 Barack Obama has warned Republicans that if they attempt to block his drive towards comprehensive immigration reform he will send his own legislation to Congress and force them to vote on it.

In a speech that sounded at times more like a campaign rallying cry than a presidential address, the United States president said lawmakers on Capitol Hill should move swiftly. "The time has come for common-sense, comprehensive immigration reform. The time is now; now is the time," he said.

The speech underlined the game of poker he is playing with Republican leaders, particularly in the House of Representatives. If they fail to fall in line over immigration reform, he implied, they would reap the electoral consequences. "If Congress is unable to move forward in a timely fashion, I will send forward a Bill based on my proposal and insist they vote on it right away," he said.

Obama is hoping that the energy he gained from the presidential election victory in November will act as the fuel that will push immigration reform through the House and on to the statute books by the end of this year.

Underscoring the message, Obama delivered his keynote immigration speech at Del Sol High School in Nevada, a state whose population is more than a quarter Latino. Their overwhelming support for Obama in the presidential election helped him to win Nevada by a comfortable six points. Republicans' share of the Latino vote in the presidential election fell to an all-time low.

Obama did not, however, spell out any detail in his speech. Instead, he has decided to leave the heavy lifting in framing the detail of a comprehensive reform to the bipartisan group of eight senators who on January 28 announced their own mission to introduce a Bill to the US Senate. The four principles the president outlined were identical to those adopted by the senators just a day earlier.

White House officials see the confluence of proposals from the administration and leading senators as a major sign that the gridlock on immigration can finally be broken. A senior administration official told reporters that the similarity of the proposals "gives us a great deal of encouragement that this is something we're going to be able to get done and get done quickly".

The precise details of that pathway – how direct and how difficult it is – is likely to be the stuff of fraught political battles ahead. To assuage Republican opposition, Obama emphasised that undocumented immigrants would have to go "to the back of the line, behind all the folks who are trying to come here legally". They would have to pass a background check, pay a penalty and taxes from the moment they were granted temporary work permits, as well as learn English.

As a further fillip to the conservatives, he adopted some of the language used by Mitt Romney on the presidential campaign trail last year. He said he would continue to insist on strengthened border security and crack down on employers who knowingly hire undocumented workers.

White House officials indicated that the plan was to extend the E-Verify system, which allows employers to check on the immigration status of job applicants, across the country over the next five years. Introducing a national E-Verify law was one of Romney's main campaign pledges.

Because the eight senators, who include senior Democratic figures such as Chuck Schumer and Dick Durbin as well as prominent Republicans John McCain and Marco Rubio, are taking the lead on drafting legislation, Obama confined most of his remarks to making the case for change.

"Us" versus "them"
The president said that it was easy to fall into the trap of thinking of immigration as an issue of "us" versus "them". "A lot of folks forget that most of 'us' used to be 'them'. It's really important to remember our history. Unless you're one of the first Americans, a Native American, you came from someplace else."

He name-checked the Irish, the Germans and the Scandinavians, the Poles, the Russians and Italians, the Chinese, Japanese and West Indians. "The huddled masses who came through Ellis Island on one coast and Angel Island on the other. All those folks, before they were 'us', they were 'them'."

The received wisdom is that the White House must achieve an immigration reform Act within the year. Once Congress enters 2014, thoughts and energies will turn to the mid-term elections and many Republican Congress members will become increasingly disinclined to risk incurring the wrath of the Tea Party by voting yes.

The calculation is that with elements included in the Bill to please conservatives – notably the emphasis on border security and a federal E-Verify system – and with the threat of another rout of the Republicans in 2016 hanging over them, Congress will finally come on board.

Onyango Obama (68) is the half-brother of the president Obama's late father. He has lived in the US since coming from Kenya as a teenager for school, reported AP.

Onyango Obama was ordered deported in 1992 after he failed to renew an application to stay.

His status emerged after his drunken driving arrest in 2011 in Framingham, Massachusetts. – © 2013 Guardian News and Media Limited