Another school in court over admissions 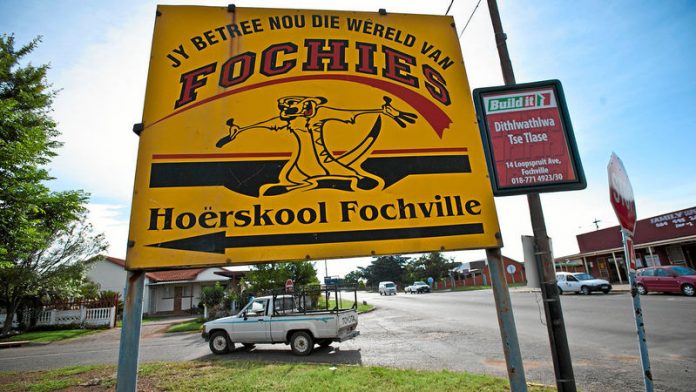 Yet another dispute over school admissions — this time with racial overtones — is to be fought in court when Hoërskool Fochville in Gauteng goes head to head with the province's education department.

This battle, which centres on 37 black, English-speaking pupils the department ordered the Afrikaans school to accept, will unfold in parallel with the higher-profile Rivonia Primary School case, which is headed for the Constitutional Court ("Education department's legal woes far from over", Mail & Guardian, January 18). Both cases will contest the question of who has the ultimate power to determine admissions — schools or provincial departments.

"We're not happy about the stand-off between school governing bodies and the government and that every time there is a fight about school admissions it ends up going to court," the director of the Centre for Child Law, Ann Skelton, said.

The school placed them in a class separate from its other pupils after reluctantly admitting them last year on the department's orders.

Stand-off in the school corridors too
"The people [at the school] tell us we are useless. They call us kaffirs," said one pupil in the affidavit. "We feel left [out]. Some children want to fight with us."

Another pupil said: "Some white children push us away because we learn in English and [they] call us 'the nigga class'."

Late in 2011, with the 37 pupils still unplaced for the following school year, the department told Hoërskool Fochville to accept them, saying this well-resourced school had the lowest pupil to classroom ratio (19.7 per class) in the area.

The court ruled that the matter was not urgent and the pupils began classes at the school last year. A new court date is yet to be set.

In December, the Centre for Child Law, represented by the Legal Resources Centre, entered the fray on the department's side. "The fights between adults are happening above the heads of real children caught in the middle," Skelton said. "School admissions is a delicate, difficult issue but we believe that the best interests of children will be met somewhere in between what the governing bodies want and what the government wants."

The centre also wants the court to order Basic Education Minister Angie Motshekga to publish norms and standards for school capacity. This would cast crucial light on who has the power to declare schools full: schools or provincial departments.

Saving on travel time
The 37 pupils, who come from the townships of Kokosi and Greenspark, are now in grade nine. Instead of travelling up to 44km a day to attend school, they travel a short distance to Fochville Hoërskool's blue fences, face-brick walls and spotless lawns.

At times they feel "isolated" and bullied, the affidavit says. "The teachers make announcements in Afrikaans and when you ask them to repeat it in English … they say: 'Dis nie my probleem nie [It's not my problem]'," said one pupil.

But they also say they have never experienced the high level of education they receive at Fochville. They love the "big and smart" buildings and "good sport equipment". As one pupil said: "I like the school despite the difficulties; it's still a very good school and their teaching methods are very effective."

Dawid Matthee, the school governing body's vice-chairperson, denied race was a factor in the school's admission practices. "We really want to stress that this is not a racial issue," he said.

"The department is trying to make it into one. We are a fully integrated school. More than 20% of the pupils are black … The crux of the matter is that Hoërskool Fochville is an Afrikaans-medium school. Pupils can only be taught in Afrikaans. These 37 pupils must prepare [for this]."

Department spokesperson Charles Phahlane said it does not want the school to change its language policy, but: "All pupils, without limitation on basis of any language, who apply within the admission period in terms of the admission regulations have rights to be placed in a public school."

He said that construction would start on a boarding school in April. This would address the need for space, he said.