Attack on a Thailand military base leaves 16 dead 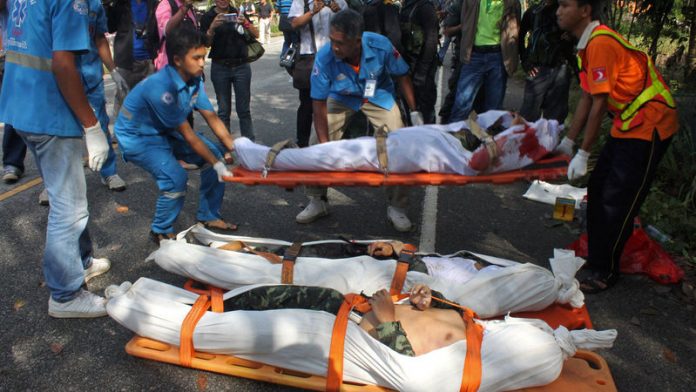 In the unusually brazen attack, one of the most deadly in some eight years of violence in Thailand's deep south, 100 militants attacked the unit in Narathiwat province, unit commander Captain Somkiat Pholprayoon said on Wednesday.

"Sixteen militants were confirmed dead after the attack," he told reporters at the scene, adding that the attackers had been dressed in army fatigues and used AK-47 and M-16 assault rifles.

A combined force of around 100 military and police officers is in "hot pursuit" of some 60 to 70 militants who fled from the base after the attack, said Pholprayoon.

A shadowy insurgency has been fighting for greater autonomy for the southernmost provinces of the country since 2004, with shootings and bombings occurring on a near-daily basis.

More than 5 500 people have been killed, both Buddhist and Muslim, in the bloody conflict.

No military casualties were reported in the early-hours assault at the base in the Bacho district of Narathiwat province, one of three Muslim-dominated provinces near the border with Malaysia. An army spokesperson had earlier put the militants' death toll at 17.

"We were able to secure the camp. All of our force are safe," he said.

Twenty four-hour curfew
He added that a key local leader of the fighters, who wore bulletproof vests during the attack, had been killed in the clashes.

Members of Thailand's security forces are frequently targeted in ambushes and roadside bombs, but organised attacks on military bases are relatively rare.

Southern army commander Lieutenant General Udomchai Thammasarorat has called for a 24-hour curfew for local villagers, for their "safety and to prevent any confusion during the pursuit of militants", he told broadcaster Thai PBS.

Deputy prime minister Chalerm Yubamrung, who heads the government's special body in charge of the southern unrest, recently proposed imposing a curfew in certain areas of the most affected provinces.

Religious leaders oppose the move, saying it will do nothing to solve the underlying problems. The Thai cabinet is set to discuss the proposal Friday.

A report by the International Crisis Group on the violence in December said insurgents had grown "bolder and stronger" amid political inaction from successive Bangkok governments.

"The violence has evolved at a pace that is starting to challenge the ability of the government to respond on its own terms," said Jim Della-Giacoma, Crisis Group's Southeast Asia project director.

The International Crisis Group recommended a greater push towards decentralisation and closer engagement with local civil society groups and peace negotiations with insurgents.

It added that the deployment of 60 000 security forces and an emergency decree "have not achieved any appreciable decline in casualties". – AFP

ALL OUR CORONAVIRUS COVERAGE Boxing and women’s football qualifying for the 2020 Olympics will be moved from the...
Read more
World

For a few dollars tourists can get framed photos at the site, pick up posters of the footballers and take home a souvenir t-shirt
Read more
World

Thailand initially said it would deport her at the request of Saudi embassy officials, barring her from travelling on to Australia
Read more
World

The boys, who will return to their families Wednesday night, announced their plan to temporarily ordain as monks to honour the death of Saman Kunan
Read more
Advertising
Continue to the category
Coronavirus