Charity workers jailed for attempting to smuggle ‘orphans’ out of Chad 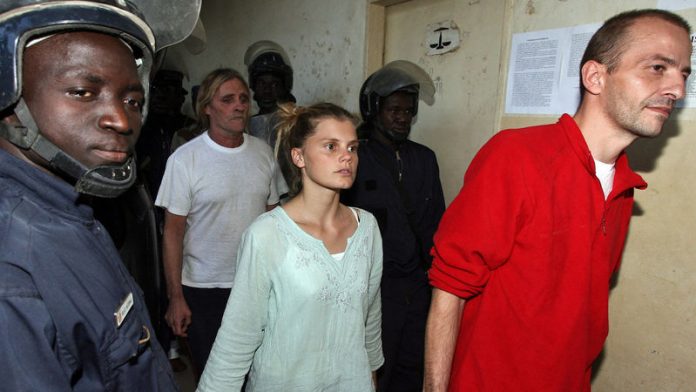 The couple was sentenced for attempting to smuggle children out of Chad claiming they were Darfur war orphans and then hand them to would-be adoptive parents in France who had paid large sums to "save" children in crisis.

Eric Bréteau, who founded the charity Arche de Zoé (or Zoé's Ark in English), and his partner Émilie Lelouch were described by a Paris judge as "megalomaniacs", which caused them to laugh as they sat in court.

They had not been present at their trial in December, preferring to stay in South Africa where they ran a guest house, tourist flight tours and a circus troop. But they unexpectedly arrived in court for sentencing amid speculation that an international arrest warrant would have been issued.

Bréteau and Lelouch were arrested with 13 others in October 2007 at Abéché airport, on Chad's eastern border with Sudan. Local authorities had become suspicious after a charter plane with a Spanish airline crew landed at the remote airport.

Police pounced when the French charity workers arrived and tried to board with a crowd of children ranging from toddlers to 10-year-olds who were wearing fake bandages to make them look ill and who had not been declared to officials.

Dozens of families, mainly French, had paid between €2 800 and €6 000 to the charity to house a child from war-torn Darfur. The would-be parents, recruited on online adoption forums, waited at an airport east of Paris with warm clothing for the children, having prepared bedrooms and new lives for them.

An investigation by Unicef and the Red Cross found that at least 85% of the children still had living parents and were from Chad, not Sudan. The charity workers were arrested and sentenced to eight years' forced labour in Chad, before being transferred to a Paris jail and then pardoned by Chad's president, opening the way for a French trial.

'Save Darfur'
The saga, which embarrassed France and led an NGO to warn against "humanitarian mercenaries", was described by one nurse as "surrealist from the start" and is being made into a film. During the trial, Isabelle Rile, a doctor who visited the charity's camp in Abéché, said she had realised that the children were almost all from the local region in Chad.

She said one day the children started crying and a girl asked for her mother. The children had thought they had been brought to Abéché to go to school, she said. When she confronted Bréteau and another doctor, she told the court, "they told me the children were unhappy that they were in Africa".

She said the children were in good health, "there was no medical catastrophe at all", they were "psychologically well" but found themselves "without their families". Another nurse described the children as "wanting to go home".

Bréteau, a father of three who set up the charity in 2005 to help tsunami victims, claimed he wanted to highlight international inaction on Sudan and "save Darfur".

He was described in court by one nurse as an "all-powerful manipulator" and accused of "playing on the [adoptive] families' desires for children'". One lawyer described Bréteau's hold over the other charity workers as "the almost messianic message by a veritable guru". A witness said Bréteau was an "idealist prepared to dump everyone in the shit".

Bréteau and Lelouch were found guilty of acting illegally as an adoption intermediary, facilitating illegal entry into France, and fraud with regard to the families who paid them. They were taken into custody, and said they would appeal.

Four other defendants, including three charity workers and a journalist who accompanied them on the Chad trip, were given suspended sentences. One defence lawyer argued they had been "blinded by kind sentiment". – © Guardian News and Media 2013