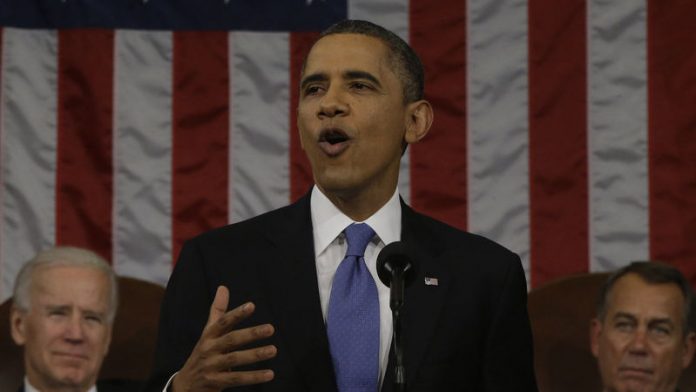 Looking to use momentum from his re-election victory last November, Obama on Tuesday vowed to turn much of his attention toward reducing the country's 7.9% unemployment rate.

"It is our unfinished task to make sure that this government works on behalf of the many, and not just the few," he said.

Obama spoke from the well of the House of Representatives for his address to a joint session of Congress in the midst of yet another bitter battle with Republicans over taxes and spending, and this tussle cast a heavy shadow over his appearance.

Even as Obama spoke, House Speaker John Boehner, the top Republican in Congress, accused him of offering "little more than the same stimulus policies that have failed to fix our economy and put Americans back to work".

Boehner's comments came in a statement that was issued while Obama was still delivering his address and the speaker was sitting behind him, at times scowling. "The president had an opportunity to offer a solution tonight and he let it slip by," Boehner said in his statement.

Obama reserved his toughest words to urge a resolution to a festering budget battle that will result in automatic deep spending cuts at the end of the month unless a deal can be reached.

Minimum wage
Many of his proposals may face a difficult path getting through Congress. He proposed raising the US minimum wage for workers from $7.25 to $9 an hour. Republicans typically oppose increases in the minimum wage out of worry it will prompt businesses to fire workers.

He backed a $50-billion program to fund infrastructure rebuilding projects like fixing aging bridges, but many Republicans are adamantly against such stimulative government spending after Obama's first-term $787-billion stimulus did not lead to a dramatic reversal in the unemployment rate.

"Our economy is adding jobs, but too many people still can't find full-time employment," he said. "Corporate profits have rocketed to all-time highs, but for more than a decade, wages and incomes have barely budged."

Obama said that to offset the cuts he would like to raise $800-billion in revenue by eliminating tax loopholes enjoyed mostly by the wealthiest Americans.

It is a proposal Boehner backed before he reluctantly agreed instead to higher income tax rates on the richest to avert a fiscal crisis at the end of 2012. Republicans are in no mood for more tax increases and want spending cuts instead.

"The American people have worked too hard, for too long, rebuilding from one crisis to see their elected officials cause another," Obama said.

In the House chamber for the speech, seated with Obama's wife, Michelle, were the parents of a Chicago teenager, Hadiya Pendleton, who was shot to death a week after participating in the president's second-term inaugural activities.

"Hadiya's parents … are in this chamber tonight, along with more than two dozen Americans whose lives have been torn apart by gun violence. They deserve a vote," Obama said.

Obama urged lawmakers to approve over the next few months an overhaul of immigration laws to permit a pathway to citizenship for some 11-million illegal immigrants. Republicans who saw Hispanics overwhelmingly vote for Obama over Republican challenger Mitt Romney last November, are more open to new immigration rules but want stronger border security first.

The clock is now ticking on Obama. He has about a year to get his legislative priorities enacted before Americans shift attention to the 2014 congressional elections.

In a nod to Republican worries over what they see as out-of-control government spending on entitlement programs for the elderly and poor, Obama said he would back efforts to reduce healthcare spending by the same amount over a decade as proposed by a bipartisan commission whose recommendations he had rejected.

He outlined steps to unwind US involvement in the unpopular 11-year-old Afghanistan war and plans to announce that 34 000 of the 66 000 US troops still there will return by early 2014.

He did not give details of what sort of residual American presence might remain in Afghanistan after 2014, when the US withdrawal is supposed to be complete.

Obama's speech came a day after North Korea conducted its third underground test of a nuclear device in response to what it called US hostility.

"Provocations of the sort we saw last night will only isolate them further, as we stand by our allies, strengthen our own missile defence and lead the world in taking firm action in response to these threats," he said.

Obama said the United States would enter into negotiations with the European Union aimed at reaching a transatlantic free trade agreement. – Reuters