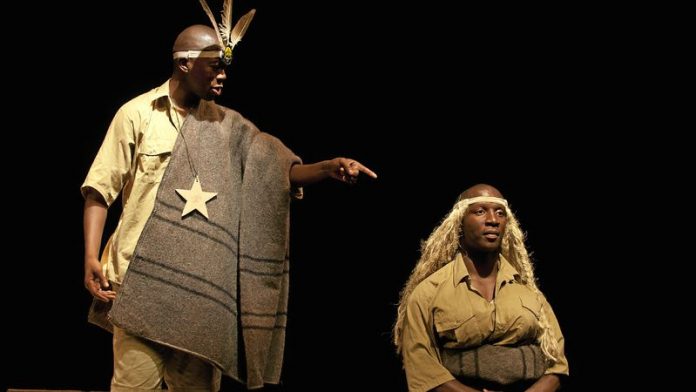 Actors Nat Ramabulana and Atandwa Kani, currently starring in the theatre production The Island, first met at the University of the Witwatersrand in 2004. Word had excitedly whirled around the drama department that iconic actor John Kani’s son had enrolled at the university. Ramabulana was then doing his second year.

And so the two find themselves on their third collaboration after previous partnerships: Hayani, an autobiographical production, and ID Pending, an exploration of identity.

Hayani was originally Ramabulana’s honours thesis. “I didn’t want to do a one-man show,” he said, in the first of two interviews with the two actors.

Even though on the surface their life stories couldn’t be more different (Ramabulana’s parents were domestic workers and Kani grew up around the cream of the black South African art world), Ramabulana said: “There were so many similarities in our lives. The difficulty of the production was including each other in our [individual] stories.”

The two have teamed up again on The Island, a play originally performed in 1973 by Winston Ntshona and John Kani. The Market Theatre production of The Island is directed by Kani senior. The play is about two prisoners, one who is about to be released, and one who is serving a life sentence. At night the two cell mates rehearse for a performance of Sophocles’s Antigone. One takes the part of Antigone, who buries her brother in defiance of the laws of the state, and the other takes the role of Creon, who sentences her to die for her crime.

Even though Kani and Ramabulana routinely work together – and are close friends – they are also rivals. “We would always audition for the same parts,” Kani said, adding that at university Ramabulana used to get all the parts that he went for, a situation that has been reversed. “I would rather have him as a friend than as an enemy. And I would rather have him play the part than anyone else.”

Ramabulana said: “We compete heavily; I won’t poison him, though,” and then laughed good-naturedly.

In fact, Kani was originally cast as Pierre in the award-winning production The Girl in the Yellow Dress but left for another, better paying, job. Ramabulana, who took on the role, won a Naledi award for best new South African play or musical for his role in the play, which was adapted from a classical text by Craig Higginson and directed by the Market Theatre’s artistic director, Malcolm Purkey.

Stage fright
Ramabulana was born in 1984 and had the proverbial tough upbringing you would expect of a child of domestic workers (his mother was a maid and his father was a gardener). A generous benefactor sent him to crèche but she died when Ramabulana was six. “My father chose to send me to a Model C school.” But later Ramabulana’s parents separated and he would live “all over Johannesburg” in an unending, itinerant shuffle that took him to shack settlements, to the back rooms of Houghton and the urban jungles of Hillbrow.

“I was ashamed because I was poor. I smelled like paraffin, which is very tough when you are trying to look cool.”

For a person who earns his bread and butter by standing in front of people, Ramabulana was painfully shy and low in self-confidence. His acne-scarred skin didn’t make it any easier. That was until his last year of high school when he performed a poem in which he played a beggar. It elicited a “you are very talented performer” comment from his teacher.

Ramabulana said that the comment turned his life around. “Up until then, I had been ashamed about my life, being poor, about where I lived. When she said this, the world of having to lie ended.”

In that period, he routinely took holi­day jobs and on one break he slaved away in an office, capturing data. “It was monotonous,” he said. It might have been around that time that he decided “all I wanted to do was act”. At Wits, he immersed himself in “everything” so that, “in the first six months, everyone knew” him.

Ramabulana said that the “only way one is able to understand a character and portray it is because, in your mind, you had to tell yourself stories. You had to understand why, for instance, a person was being mean to you.”

It’s not just adverse personal circumstances he has conquered; he has also escaped industry pigeonholes of race. When he was coming of age, the understanding in the industry was that a black guy “could only play tsotsi roles; that you couldn’t be an English gentleman”.

In many ways ID Pending, his co-production with Kani that explored and splintered identities, was meant to “laugh at these stereotypes”.

With four professional theatre productions to his name (Master Harold and the Boys, The Girl in the Yellow Dress, The Island and Hayani) and roles on the soap opera Scandal and Afrikaans drama Askies, Ramabulana doesn’t lack work.

But isn’t Hollywood a dream destination? It is, he said, “but I want Hollywood to come to me”.

Big shoes to fill
This is exactly what has happened to Kani, who is the young Nelson Mandela in the forthcoming movie on the icon, Long Walk to Freedom, which was filmed in Johannesburg, the Drakensberg and Cape Town (Brit Idris Elba plays the older freedom fighter).

Born in Port Elizabeth, Kani moved to Johannesburg when he was around six. When I met him in 2006, or perhaps 2007, at a restaurant in Braamfontein, we were in the company of mutual friends. I didn’t know who he was and they played a trick on me.

They “gossiped” with Kani about his supposedly dominating and overbearing father and asked me what advice I would give to this man. Without giving it much thought, I said: “He should kill his father”. Of course, I didn’t mean it literally – the classic text of Oedipus Rex was on my mind.

The immense legacy of his father has been an albatross around his neck. Just about the second thing people will say to him is “you are John Kani’s son” or “you are your father’s son”. Kani’s wry response to all of this is: “I thought that [my being my father’s son] is a given.” But Kani is his father’s son in a way that none of his siblings is: he is his father’s professional son.

When he complains about the unbreakable umbilical cord that ties him to Kani senior, some might say he doth protest too much. It’s not as though he hasn’t used his royal lineage to his advantage (he routinely refers to himself as the “prince of theatre”).His path, surely, must have been smoother than most of his peers – much like Martin Amis found it easier to get ahead in the literary world, helped by Amis pére, Kingsley.

In all of this it’s sometimes easy to forget his mother, Mandisa. She was a model in her youthful days; she was also a teacher, an actor and a TV presenter. “Then she met John and she had to look after the children,” Kani said.

The young Kani wasn’t always a fan of the theatre: “I hated it,” he said. “I always ran away from the theatre. But at some point I sat back and said [to myself], ‘this must mean something’. I learnt to understand it, to love it.”

He went to Wits to study drama after a bewildering year at the University of Johannesburg, where he studied something called audiovisual production management.

In his blood
Kani had what in sport is called a home-ground advantage over his peers: he had seen a script before, had probably been to a rehearsal and had certainly been to the theatre more times than anyone else in his class.

That year in which he studied at UJ (one of his majors was industrial psychology, he tells me with a grin) was revealing in many ways. Apart from realising that he was “dying” inside from not being fulfilled, it became clear that he loved entertaining people, which must have given him the guts to attempt to confront his father. “I am going to jump and see what happens,” Kani said. “I’ve never regretted that decision.”

He could have been referring to his many theatre performances including in his father’s Othello, Janice Honeyman’s The Tempest and Tshepo wa Mamatu’s The Miseducation of Miss Nondela.

He is also a prolific actor on tele­vision. His credits include Hlomla Dandala’s The Bat, Soul Buddyz, the United States series Wild At Heart and Royal Pains, and the forthcoming SABC series High Rollers.

At first glance Ramabulana’s route to success has been arduous, but if you look closely, Kani’s road has an even bigger obstacle placed right across it: the immense legacy of his father.

“I have been fighting for attention all my life and I had to find a stage to say what I wanted to say,” he said.

It looks as though the stage that was for long his father’s has grown a foot wider to accommodate his son and his peers.

The Island runs at the Barney Simon Theatre in the Market Theatre Complex, Jo’burg, until March 24