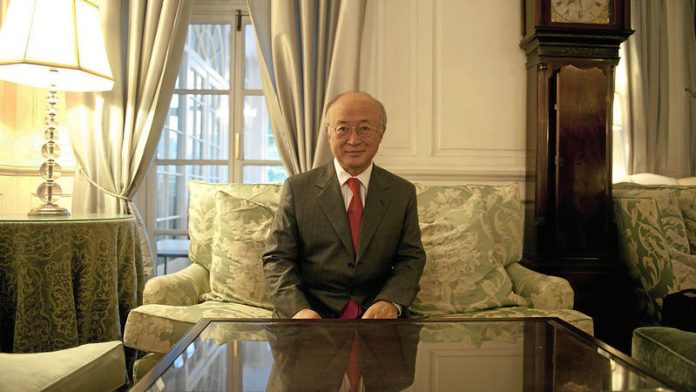 Funding and human resources capacity are two of the biggest challenges confronting any country embarking on a nuclear energy programme, according to Yukiya Amano, director general of the International Atomic Energy Agency.

These are two critical issues that South African authorities will have to address as the country faces signing on the dotted line for its new nuclear procurement megaplan for six nuclear power stations by 2030. Funding was a "difficult issue" for the nuclear industry everywhere, said Amano, who was on a brief tour of South Africa last week.

His visit coincided with the completion of a two-week mission by the agency to conduct an integrated nuclear infrastructure review for South Africa, which will be handed over to the Cabinet on its completion in coming months.

The review considers 19 ­infrastructure milestones over three separate phases that a country needs to meet when beginning a nuclear programme. These include everything from financing to procurement, from human resources development to waste management.

The building of six new nuclear power stations could cost in the order of R1-trillion. Already, potential electricity tariff increases of 16% over the next five years have sparked outrage across the country. Financing new nuclear power stations, along with building other new-generation capacity outlined in the country's electricity road map, the integrated resource plan, will push tariff increases to 20%, according to power utility Eskom.

The national planning commission and business organisations have called for an in-depth investigation into the financial viability of South Africa's nuclear ambitions. Although a determination on new nuclear generation is yet to be made, Eskom has been named the owner and operator of any future nuclear power stations.

But, according to Amano, if a nuclear project is well planned it can attract the necessary funding.

Necessary skills
It is not clear whether South Africa has the necessary skills to procure, build, operate, maintain and regulate six new nuclear power stations. Human resources, however, were "not static" and could be developed, said Amano. South Africa already had a critical mass of engineers and scientists in the nuclear field, proven by Eskom's existing nuclear power station, Koeberg.

Amano was clear, however, that it was up to individual countries to decide whether nuclear power was the best choice to meet their needs. "The cost of nuclear is different depending on the country," he said.

The relative competitiveness of nuclear power depended on the existing resources already available to a nation and its energy mix. Many countries opted for nuclear power as it offered an alternative to fossil fuels, as well as potentially cheaper and more stable fuel costs during the lifetime of plants.

Amano pointed to his home country, Japan. Following the accident at the Fukushima Daiichi nuclear plant in 2011, Japan had shut down its 50 nuclear plants and has been importing oil to meet its energy needs. As a result, Japan recorded its first ever budget deficit two years ago, which widened again last year and the country faces increases in the retail price of electricity.

Measured in rands per megawatt hour, Koeberg's primary fuel costs were three times less than the costs of its coal-fired stations, according to Eskom.

Cost increases
Prior to the Fukushima accident, nuclear power was seen as an increasingly attractive choice for new-generation capacity by many countries. But a number of projects across the globe have been hit by delays and cost overruns.

Late last year, the Wall Street Journal reported three cases of notable cost increases and concerns about delays in the construction of new plants, namely the Olkiluoto plant in Finland, which has been under construction since 2005 and where costs have risen from €3-billion to closer to €8-billion, and a plant in Flamanville in France, which is now expected to cost €8-billion rather than the originally estimated €3.3-billion. There is also growing concern that a new plant being constructed in Georgia in the United States, estimated at a cost of $14-billion, is running years behind schedule.

China, meanwhile, has halted work on its ambitious nuclear programme — it has about 30 nuclear plants under construction — following the Fukushima disaster. But in mid-2012, it lifted the year-long freeze after completing a review of safety standards and regulations.

Delays
​According to Amano, the nature of project delays is different across the globe. The delays in the Finnish and French reactors, for instance, were owed to the fact that a new type of very advanced nuclear reactor, known as an evolutionary pressurise reactor, was being built. The decision by China to place an emphasis on safety in the wake of Fukushima was commendable, he said. "A one-year delay is worthwhile pain to look at what happened and what can be learned.The agency predicts that, although growth in nuclear power will slow following Fukushima, it will grow by about 20% globally according to the most conservative scenario.

There are 437 operating nuclear power reactors in the world today according to the agency and this could increase by 80 or 90 in the next 20 years.

Amano said that there were examples of nuclear plants under construction that were being built both to budget and on schedule, notably a plant in the United Arab Emirates. The reactor is being built in Barakah and is led by a South Korean consortium.

In South Africa's case, new nuclear power was meant to come on stream by 2023, according to the integrated resource plan. The energy department has indicated, however, that, given the delay in taking a decision on nuclear procurement, it is unlikely to happen within this time frame.

Calls have emerged for the integrated resource plan itself to be reviewed. Industry actors and observers have noted that the demand forecasts for electricity, which underpin the plan, need urgent re-examination, and that the document does not take into account recent developments such as huge regional gas discoveries. Gas-fuelled power plants are quicker and cheaper to build.

Amano stressed that the International Atomic Energy Agency was not a "salesman" for nuclear energy. The best solution to any country's power needs was a healthy mix of energy sources, all of which come with their own advantages and disadvantages.