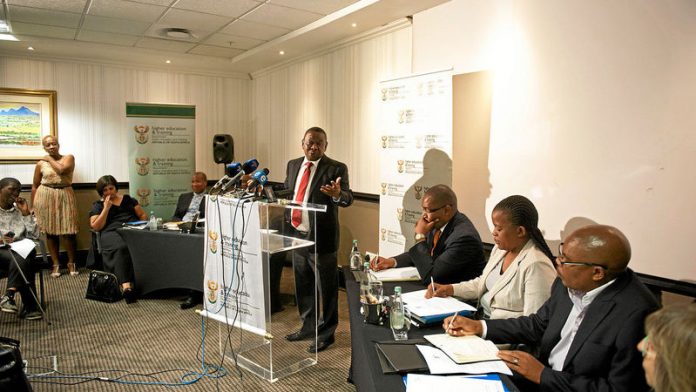 In "Higher Education must be transformed" (February 1), the director general of the department of higher education and training, Gwebs Qonde, makes a range of statements that are worth responding to.

First, referring to the transformation oversight committee newly instituted by Higher Education Minister Blade Nzimande, he said that "many in the university system are yearning for this kind of intervention as a result of incidents they encounter daily". This statement is made without any qualification or evidence. One could dismiss it as a "throwaway" by a government official desperate to give credence to the view that our universities "must be transformed". But when further unsubstantiated statements are made, such as "after the release of the Soudien report, no universities disagreed with the recommendation that a transformation-oversight committee be established", alarm bells begin to ring.

Second, Qonde said "the department is exposed to a plethora of complaints from the sector and the public at large … the oversight committee has to ensure that all these discrepancies are addressed and benchmarks set so that the sector can be strengthened". It begs the question whether these complaints are not supposed to be channelled to universities? How will the committee address such complaints? These are fundamental governance and role-clarification questions that many are grappling with in the sector.

Responding to the Soudien report, Higher Education South Africa un–equivocally acknowledges that institutions are by no means untouched by the legacies of the past and the continued inequities of the present. We must prioritise meeting the challenges of transformation in a much more sustained and focused way. To this end, close to 20 of our universities have developed and are implementing transformation plans.

Higher Education South Africa believes that, to advance such programmes effectively, dialogue is needed about what a "transformed" institution would look like, so we know the goals and have some sense of how to achieve them. Transformation is a contested concept, with different constituencies in universities and between one university and another seemingly working with different conceptions of what it might mean. The inclination is to foster and welcome genuine debate, so it is not right to adopt a cookie-cutter definition of transformation. Hence, too, we take a dim view of the establishment of an oversight committee, but it has nothing to do with the credentials of its members, as Qonde wants the ­public to believe.

An oversight committee of the sort proposed could erode the authority of these councils and have a negative impact on their functioning. This, in turn, would have deleterious long-term consequences for the proper governance of higher-education institutions.

Instead, institutions would like to see close working relationships between the minister and the councils, so that the latter can be held accountable for their own transformation objectives by the former. Again, ordinary reporting and accountability mechanisms should be enough for such dynamic engagement between the universities and the ministry to take root.

It is our view that transformation can be meaningfully achieved only if the institutions themselves own the project. Government provides the legislative framework, resources, incentives and policies that form the context in which higher-education institutions operate, but the heavy-handed imposition of targets and decrees, holding vice-chancellors to account through their employment contracts and the establishment of a monitoring unit in the department of higher education and training risks cementing the very compliance-based approach that the Soudien report criticises.

A positive role for the state in aiding institutional efforts lies not in policing, but in helping institutions to seek a robust, collaborative partnership with the government, so criticisms, views, suggestions and ideas can be exchanged freely in an atmosphere of mutual support and understanding. Before we can "support its work", as the department advises, we would like to be assured of how the committee will interface with the mandate of the university councils; how the committee will assist in facilitating conceptual clarity on the meaning of "a transformed institution"; and how targets and benchmarks will be set. If not well conceptualised, the oversight committee could undermine the governance assumptions on which the relationship between higher education and the state is based, including but not limited to the following:

• No single actor or agency can claim sole responsibility or authority for determining the policies and priorities of the higher education system;

• Competing and complementary interests, interdependence and common goals must be recognised;

• Participation and effectiveness must be balanced; and

Before we see "the work of the committee as an investment for the future of our country", a more open and robust engagement on these issues is required.