Syria and Iran condemn US plan to aid rebels 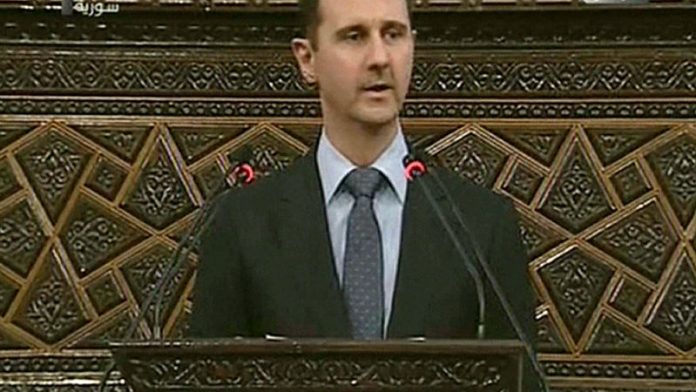 In an television interview with the Sunday Times shown in London late on Saturday, Assad said Britain's involvement in the Syria crisis had been naive and unrealistic.

"This government is acting in a naive, confused and unrealistic manner. If they want to play a role they have to change this, they have to act in a more reasonable and responsible way."

Assad added: "How can you ask them to play a role in making the situation better, more stable, how can we expect them to make the violence less when they want to send the military supply to the terrorist?"

Backed by the United States, Britain and much of Western Europe, Syria's opposition has made plain that Assad can play no role in a future Syrian government.

But as the situation deteriorates on the ground, the opposition is increasingly frustrated with the West's reluctance to get directly involved in the fighting, and wants foreign powers to send weapons to help its fighters.

On Thursday, the United States said it would for the first time give non-lethal aid to Syrian rebels, describing the aid as a way to bolster the rebels' popular support.

The assistance will include medical supplies, food for rebel fighters and $60-million to help the civil opposition provide basic services like security, education and sanitation.

Britain supports increasing general assistance to the rebels and has not ruled out supplying arms at some point in the future if the situation continued to deteriorate.

Iran, which backs Assad and his Shi'ite backers, threw its weight behind its ally on Saturday and said the US move would only prolong the Syrian conflict, an uprising-turned-civil war in which some 70 000 people have been killed.

"If you really feel sorry about the ongoing situation in Syria you should force the opposition to sit at the negotiation table with the Syrian government and put an end to bloodshed," said Iran's foreign minister, Ali Akbar Salehi.

"Why do you encourage the opposition to continue these acts of violence?"

"I do not understand how the United States can give support to groups that kill the Syrian people," he said.

"This is nothing but a double-standard policy … One who seeks a political solution does not punish the Syrian people." – Reuters