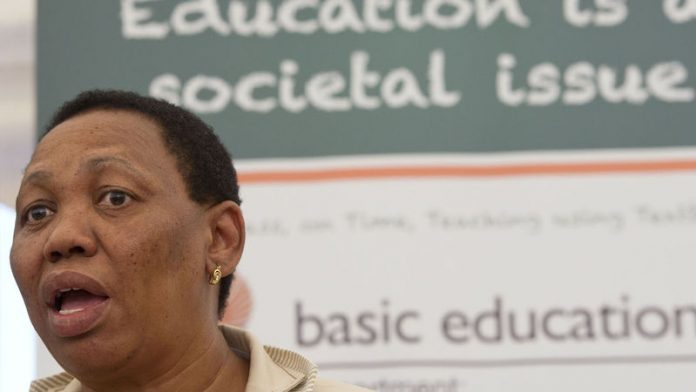 The largest teacher union in the country Sadtu, aligned to the Congress of South African Trade Unions, told journalists in a media briefing at its headquarters in Johannesburg on Tuesday that it has lost confidence in Motshekga and wants her gone.

The union also said it could no longer take Motshekga seriously because of her alleged blunders.

The call by the union's national executive committee stems from her "unilateral" decision to withdraw a collective agreement her department signed with unions in 2011. The union said it learnt last week that Motshekga "unilaterally and with immediate effect withdrew Collective Agreement No.1 of 2011" on February 12.

"We view this unilateral withdrawal as a blatant assault of collective bargaining and we refuse to stand aside whilst our rights as workers are trampled upon by those in power," the union's secretary general Mugwena Maluleke said at the briefing.

The agreement reached in the bargaining chambers two years ago concerned the increase of salaries for matric examination paper markers. It would hike the salaries by 100%, the Mail & Guardian reported last December.

But the agreement has been contested over the years, and that is why it has never been implemented. Despite the department's director general Bobby Soobrayan signing the agreement, it has repeatedly told unions it could not afford the increments.

"To us, the collective bargaining chambers were established in order to ensure labour peace. The undermining of decisions and agreements taken in such structures is a recipe for disaster in the sector and sets a rather regrettable precedent," Maluleke said.

"The withdrawal is a sign of a lack of appetite to see sustainable labour peace in a sector that has been declared as an apex priority by the ruling party."

Sadtu's action to compel Motshekga to resign does not include a national teachers' strike, but the union will boycott various programmes the department uses to smoothly run public education.

" … If the minister does not submit her long-awaited resignation we will limit our interaction with the department to the employment contract and strictly within the working hours only," said Maluleke.

Teachers aligned to the union will not mark any assessment scripts, it said. These include supplementary exam papers, scripts for the Annual National Assessment and the final exams.

The union also urged its members to boycott the upcoming National Teacher Awards, scheduled to take place on Thursday.

Sadtu also threatened to "lobby all the other public sector unions to withdraw from the three-year collective agreement that was intended to ensure labour peace because the minister has no intention to sustain it".

The union said that Motshekga had "run out of ideas on how to turn around the department … [She has] even resorted to publicity stunts such as the announcement of the biometric registration system, without even having the decency expected of a minister to engage the major stakeholders".

The multimillion-rand biometric fingerprint system that Motshekga plans to introduce was a "money-making scheme", Maluleke told the briefing. It will be used to police teachers and perpetuate their deprofessionalisation of teaching, he said.

"Policing teachers should not be her obsession because there is no evidence whatsoever to suggest that this would improve their performance and morale which is currently at an all-time low under her leadership," added Maluleke.

Motshekga's spokesperson, Panyaza Lesufi, declined to talk to the M&G.