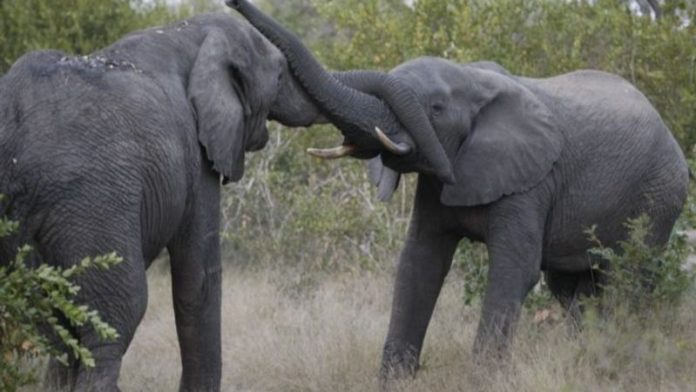 Africa’s elephants are facing another threat to their existence, and something needs to be urgently done to stop this. This is the message of a new report, Elephants in the Dust – The African Elephant Crisis. Released during this year’s Convention on International Trade in Endangered Species of Wild Flora and Fauna (Cites) meeting in Bangkok, Thailand, it warns about the growing levels of poaching across the continent.

Achim Steiner, executive director of the United Nations Environment Programme, said, “In Central and West Africa the elephant may soon disappear from whole areas unless urgent action is taken.”

He places the blame squarely on Asian countries. “Organised syndicates ship several tonnes of ivory at a time to markets in Asia.”

John Scanlon, secretary general of Cites, said, “Elephants are now at dire risk due to a dramatic rise in poaching for their ivory.”

“A well-targeted and collaborative effort is required to put an end to this senseless slaughter and ensure the survival of these majestic animals in the wild,” he said.

25 000 killed
The report takes information from the Monitoring Illegal Killing of Elephants programme’s sites across Africa. While they only cover 40% of the continent’s population, 17 000 elephants were killed at these in 2011. Given this, it guesses that the “likely figure” of elephants killed across the continent was nearer 25 000.

The trade in illegal ivory has more than doubled since 2007, the report said.

With poaching escalating, the Guardian reported that the “gang of eight” nations at the heart of the illegal ivory trade could be hit with heavy sanctions if they did not crack down on the trade.

Tom Milliken, who runs the Elephant Trade Information System, told the newspaper his group had been tracking trade since 1998, and identified these eight countries as the biggest problem. "Unless Cites scales up and takes this seriously, we are not going to win this thing," he said.

The eight have been given until next week to come up with serious plans to combat illegal ivory trade across their borders, and internally. Otherwise Cites could ban trade with these countries, seriously harming their economies.

The illegal trade
Elephant poaching is one problem that South Africa does not have, having curbed it several decades ago. But experts have warned that with levels across the continent plummeting, and sophisticated networks for rhino poaching in place, the problem could spread into Kruger Park.

The South Africa delegation at Cites, led by environment minister Edna Molewa, has been amongst the busiest in the Thai capital. It has had more side meetings and conferences than any other country.

And the department said Molewa has been meeting with her counterparts from Vietnam and China to work on stopping rhino poaching locally. Last year 668 rhino were killed in South Africa, with 146 having already been killed this year.

And last week Molewa said the cocktail of measures being used to combat poaching could now include the rebuilding of the fence that used to separate the South African side of the Limpopo Transfrontier Park from the Mozambican side.

David Mabunda, head of the South African National Parks, said this week that his board had recommended to Molewa that the fence be rebuilt.

Ivory hunting
South Africa’s biggest fight at Cites is to stop a proposal by Kenya to put a zero quota on ivory hunting on the local market. This would stop legalised hunting for trophies, which environmental affairs said in its submission to Cites would harm conservation methods by taking money out of the pot.

The submission also revealed that 3.2% of South Africa’s rhino population is lost to poaching annually. And with births, the population was still growing at 4% a year.