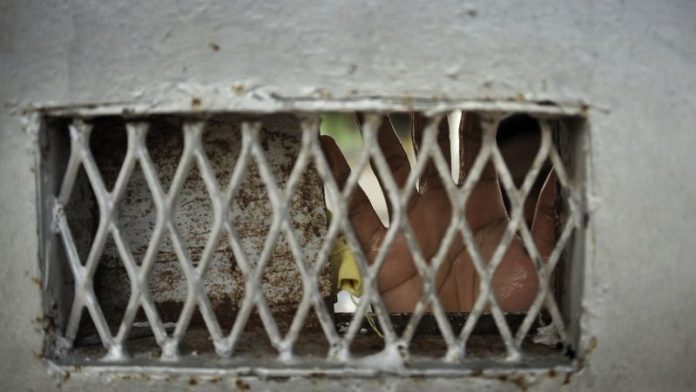 As Oscar Pistorius, the Olympian and Paralympian alleged murderer, settled into a luxurious Pretoria mansion to await his trial, Ronnie Fakude, a 50-year-old paraplegic in nappies also awaiting trial, was pleading for medical attention in Bloemfontein’s Grootvlei Prison. In such acute pain that he believed he was dying, Fakude begged the Wits Justice Project to help him to secure Islamic burial rights.

Fakude, who has been in prison for 15 months facing fraud charges, has spent his days in an overcrowded cell designed for 32 men, but that houses 88.

Paralysed from the waist down from a car hijacking, the department of correctional services (DCS) was unable to provide him with even the rudimentary comfort of a wheelchair. Instead, Fakude has been forced to drag himself around the prison on crutches “pulling my legs and throwing them to the front”.

Since the Justice Project first wrote about the plight of “Prisoner A” in local and British newspapers two weeks ago and the story went semi-viral, offers of help have been received from around the world. Initially, Fakude was reluctant to reveal his identity because he feared victimisation by department officials. Subsequently, he became so ill that he no longer cared. In the meantime, Grootvlei officials maintained that “there was nothing wrong with him, apart from indigestion”.

Following the intervention of the Justice Project and Britta Rotmann, the department’s chief deputy commissioner for remand detention, Fakude was finally moved to Grootvlei’s “hospital” section and immediately placed on a drip by “medical staff”. A doctor visits the prison only once a week.

Outside help
After Andrea Vinassa, the media co-ordinator of the National Council for Persons with Physical Disabilities, read his story, Fakude’s life took a turn for the better.

“We got a private doctor to see him last Sunday to ascertain the severity of his medical condition and had medicine delivered to him,” said Therina Wentzel, the national director of the council, a non-governmental organisation funded mostly by public contributions to the Casual Day campaign, which has raised R170-million for people with disabilities over the past 18 years.

Then, last Tuesday, Hendrien de Klerk, the director of the Free State Association for Physical Disabilities, donated a wheelchair and offered to accommodate Fakude in the association’s specially equipped Jean Webber House should he be released on bail.

The possibility of Pistorius being denied bail and awaiting trial in a South African correctional facility has highlighted the plight of other people with disabilities behind bars. Like Pistorius, Fakude remains theoretically innocent until proven guilty. Unlike Pistorius, Fakude never applied for bail because he believed he could not afford it. His co-accused were granted bail of R15 000. Moreover, he said, he was advised by the investigating officer and prosecutor that he could not apply for bail until the investigation was complete. A date, March 18, has finally been set for his hearing.

“Living here is tough,” he said. For example, in Fakude’s cell, 12 people slept in two bunks pushed together, six on the top and six on the bottom. “I have my own bed on the bottom, which is a privilege. Luckily, I don’t have to share because of my medical status.

“I have no bowel or bladder control, which is why I wear nappies. I got tuberculosis while I was in Jo’burg prison, prior to moving here. This means I have a compromised lung and am prone to infections.

“Paraplegics need special diets. I have indigestion because of the bad prison diet. I also have ulcers, which cause me terrible pain and make me shit blood. I have one kidney and my intestines are sutured because of injuries from my hijacking. I have pains and pins and needles throughout my body because I can’t exercise or get physiotherapy.”

Rats in hospital
The Wits Justice Project understands that the DCS is now considering accommodating Fakude in Grootvlei’s “hospital” until the conclusion of his trial. But whether the “hospital” is a better alternative to the cell is a moot point.

“It’s just a normal cell with single beds instead of bunks,” Fakude said. “It is clean, has a tiled floor and isn’t as crowded as a cell. That’s the only difference. Actually, my cell bed is better than the hospital bed.”

Fakude’s wife, Precious, points out that even if the “hospital” is less crowded than a conventional cell, if a paraplegic inmate is accommodated there indefinitely, there is the danger of exposure to infection, particularly for a person with a compromised immune system.

Another Grootvlei inmate has complained to the Justice Project of rats in the “hospital” at night. “At least the cells are too overcrowded and noisy for rats,” he said. “But if there are rats in a hospital, it tells you something is very, very wrong. That place is actually a death chamber, not a hospital.”

Although the DCS does have a policy for offenders with disabilities, which includes inmates with deafness, paraplegia, quadriplegia, non-certifiable mental conditions, blindness or extreme impairment of vision, and which also dictates the establishment of a database, it is unable to ascertain the exact number of affected inmates.

According to Koos Gerber, the department’s acting deputy commissioner of communications: “There are more than 150 000 inmates in correctional facilities, many with some degree of disability. Individual needs are evaluated and attended to in the centres where the inmates are accommodated. This is where the figures are recorded. There is no national or centralised database. Our main concern is that their needs are taken care of. Any allegations that department officials are not applying our policies will be investigated and there will be consequences.”

A special fund has been set up for Fakude under the auspices of the National Council for Persons with Physical Disabilities.

Visit witsjusticeproject.com/2013/03/04/prisoner-a-update-page/ for details should you wish to assist him, or others.

Carolyn Raphaely is a member of the Wits Justice Project, which investigates miscarriages of justice with a particular focus on the problems of remand detention. The project is located in the journalism department at the University of the Witwatersrand.