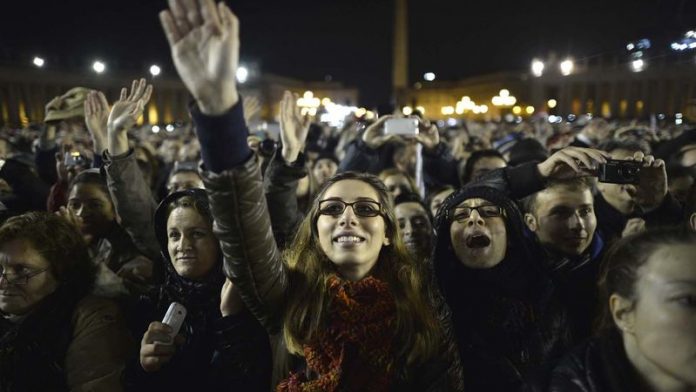 Despite the joyful celebrations outside the Municipal Cathedral in Buenos Aires on Wednesday, the news of Latin America's first pope was clouded by lingering concerns about the role of the church – and its new head – during Argentina's brutal military dictatorship.

The Catholic church and Pope Francis have been accused of a complicit silence and worse during the "dirty war" of murders and abductions carried out by the junta that ruled Argentina from 1976 to 1983.

The evidence is sketchy and contested. Documents have been destroyed and many of those who were victims or perpetrators have since died. The moral argument is clear, but the reality of life at that time put many people in a grey position. It was dangerous at that time to speak out and risk being labelled a subversive. But many, including priests and bishops, did so and subsequently disappeared. Those who stayed silent have had to live with their consciences – and sometimes the risk of a trial.

Its behaviour during that period in Argentine history was so unsaintly that in 2000 the Argentinian Catholic church itself made a public apology for its failure to take a stand against the generals. "We want to confess before God everything we have done badly," Argentina's Episcopal Conference said at the time.

In February, a court noted during the sentencing of three former military men to life imprisonment for  killing two priests that the church hierarchy had "closed its eyes" to the killing of progressive priests.

As head of the Jesuit order from 1973 to 1979, Jorge Bergoglio – as the new pope was known until Wednesday – was a member of the hierarchy during the period when the wider Catholic church backed the military government and called for their followers to be patriotic.

Missing
Bergoglio twice refused to testify in court about his role as head of the Jesuit order. When he eventually appeared in front of a judge in 2010, he was accused by lawyers of being evasive. The main charge against Bergoglio involves the kidnapping of two Jesuit priests, Orlando Yorio and Francisco Jalics, who were taken by navy officers in May 1976 and held in inhumane conditions for the missionary work they conducted in the country's slums, a politically risky activity at the time.

His chief accuser is journalist Horacio Verbitsky, the author of a book on the church called El Silencio (The Silence), which claims that Bergoglio withdrew his order's protection from the two priests, in effect giving the military a green light for their abduction.

The claims are based on conversations with Jalics, who was released after his ordeal and later moved to a German monastery.

Bergoglio has called the allegations "slander" and holds that, on the ­contrary, he moved behind the scenes to save the lives of the two priests and others whom he secretly hid from the death squads. In one case, he claims he even gave his identity papers to one dissident who looked like him so that he could flee the country.

For some, that makes him a hero. Others are sceptical. Eduardo de la Serna, co-ordinator of a left-wing group of priests who focus on the plight of the poor, told Radio Del Plata that: "Bergoglio is a man of power and he knows how [to] position himself among powerful people. I still have many doubts about his role regarding the Jesuits who went missing under the dictatorship."

Many in the church are keen to move on from that period in the ­history of Argentina. They say the new pope helped to heal the wounds of the dirty war and to restore the credibility of the Catholic hierarchy.

"As archbishop, he faced a monumental task, and he was even accused of collaboration with the dirty war, which he strenuously denied and [he] was ultimately cleared. If he can restore the credibility of the church there [in Argentina], he can handle the scandals that have befallen the church worldwide because he knows how to connect to the people," said Ramon Luzarraga, theologian-in-residence at the University of Dayton.

But the issue is unlikely to go away soon, particularly while high-­profile trials are still taking place. – © Guardian News & Media 2013