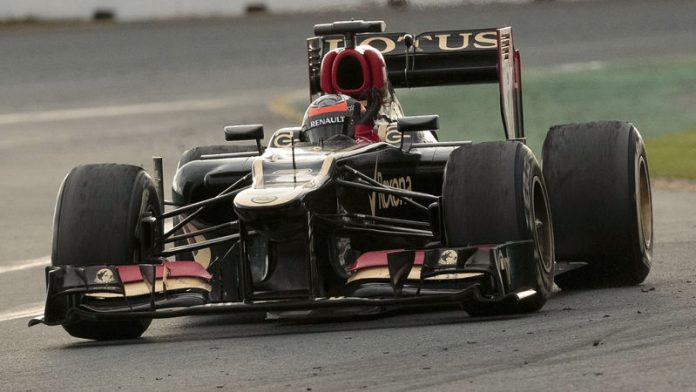 Finland's 2007 world champion rode to victory on a two-stop strategy and crossed the line 12.4 seconds clear of Ferrari's Fernando Alonso.

Triple world champion Sebastian Vettel rounded out the podium in third place for Red Bull after struggling with tyre wear throughout the race.

The 25-year-old Vettel got away cleanly from pole position but the variety of strategies forced on the teams by the tyres and the pace shown by Red Bull's rivals ensured this was never going to be a procession for the German.

A few light showers contributed to an intriguing race but never threatened to disfigure it as top drivers engaged in fierce battles around the circuit and the lead changed hands with surprising frequency.

Seven cars led the race at one stage or other but after Raikkonen hit the front for the second time on lap 43, it looked like only a mechanical problem would stop him from winning his 20th grand prix to match compatriot Mika Hakkinen's career tally.

"I had a very good car all weekend," said Raikkonen, the former McLaren and Ferrari driver who made his comeback last season after two years in rallying, on a podium of champions.

"You just have to get through the early laps in the first race of the season. Near the end, I was still pushing because I knew Fernando was catching up a bit and I thought at some point we would need a little extra if the rain came again.

"We are happy with the win but there's an awful lot of work to do to win the championship."

It was the first season-opening win by a team called Lotus since American Mario Andretti won the 1978 Argentine Grand Prix.

Red Bull's Mark Webber had a terrible start from the front row and came up short in his 12th attempt to win his home race, finishing sixth.

Adrian Sutil, returning to the sport after a year out, enjoyed a long period as the unlikely leader of the race but finished seventh, just ahead of his Force India teammate Paul Di Resta.

Jenson Button, the winner of three of the last four races at Albert Park, was clearly off the pace but brought his McLaren home in ninth with Raikkonen's French teammate Romain Grosjean claiming the final point in 10th.

Alonso grumbled a bit afterwards about being held up by backmarkers as he attempted to chase Raikkonen down but was unable to disguise his delight at his pace.

"We are very happy, we had a difficult start two years ago and again last year but this year it's different," said the twice champion, who missed out on the final qualifying session in Australia last year.

"We feel much more comfortable, the car is responding well and is competitive. We have a good season ahead of us. We only have five days to prepare for the next race but we will again be a tough opponent."

Vettel described himself as happy with third place but admitted he had hoped for more after dominating qualifying, which had been completed on Sunday morning after torrential rain on Saturday evening.

"Of course we wanted more, when you start from pole you expect to win," said Vettel.

"But we could see from the the first few laps that the tyres were falling apart. Sometimes we have to admit that other people are faster than us."

The race started with 21 cars after Nico Hulkenberg's Sauber suffered a fuel system failure and he was unable to take to the grid, while Caterham's Charles Pic was allowed to take part by the stewards despite not having set a qualifying time.

All made it to lap 25, when Pastor Maldonado beached his Williams on the trackside gravel and Nico Rosberg soon followed him out of the race when his Mercedes developed an electronics problem and parked up. – Reuters