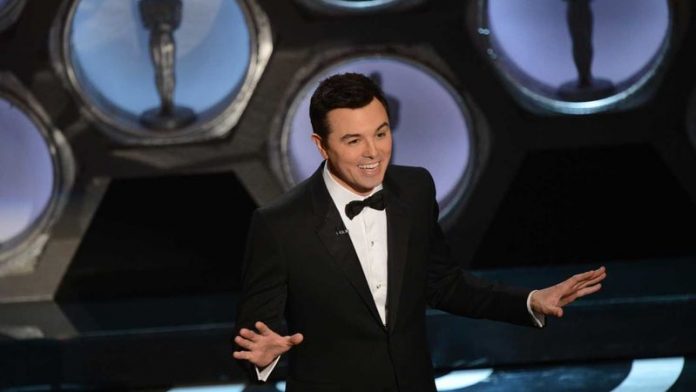 The producers of this year's controversial Oscars ceremony have defended host Seth MacFarlane against accusations that the Ted creator oversaw the most mean-spirited event in the awards' history.

MacFarlane's jokes about female nudity, domestic violence and Jews in Hollywood led to vilification from commentators, with a musical segment titled We Saw Your Boobs drawing particular criticism. However, three weeks on from the ceremony at the Dolby Theatre in Los Angeles, producers Neil Meron and Craig Zadan told the Hollywood Reporter their host had done exactly the job he had been hired to do.

"Seth is irreverent, he comments on things that happen in our culture, and that's what he did and we thought he did an extraordinary job," said Meron at the Glaad (Gay and Lesbian Alliance Against Defamation) awards in New York on Saturday. "People have complained for years and years that the Oscars were becoming irrelevant. And I think what we did this year is to really make them part of the cultural conversation, and I think that's the important part that people will take away."

Zadan added: "I spoke to somebody yesterday and they were disappointed that he didn't go further. So you can't really gauge; somebody thinks it's too much, some people think it's just enough … he brought in the youngest demos that the Oscars have ever had."

As for the "boobs" song, which jovially pointed out the alleged willingness of female Hollywood stars to undress on camera, Zadan pointed out that it was a satirical sequence, which MacFarlane and his writers had intended as a self-effacing moment. "It was not about the women that were mentioned, the song was about him being a bad host and him being a juvenile, which was why he was a bad host," he said. Meron said: "We live in a society that is not very conscious of satire any more – they're very serious."

A total of 40.3-million people watched the Oscars in the US, the show's best ratings in three years. MacFarlane's "edgy" approach also saw a 20% boost among viewers in the coveted 18 to 34 age range and a 34% increase in male viewers within the same demographic.

There was, nevertheless, widespread criticism of the first-time host's off-colour humour, with quips about nine-year-old Quvenzhané Wallis's future dating prospects, the Chris Brown/Rihanna farrago and a skit riffing on the proliferation of Jewish people in Hollywood also drawing ire from bloggers, critics and other commentators. – © Guardian News and Media 2013